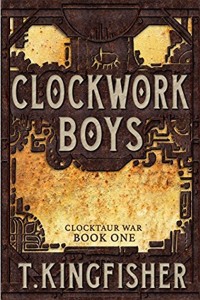 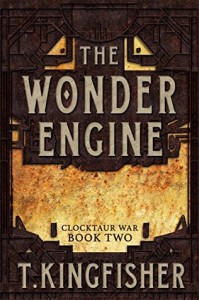 That is to say: Clockwork Boys and The Wonder Engine. Two parts of one book really, though the second one starts with a recap that jars a little when reading back-to-back, and there are tiny inconsistencies like calling someone Jenny in the second book who was Molly in the first (but she’s dead before the story starts so it doesn’t matter).

I wouldn’t have chosen it if I hadn’t read enough T. Kingfisher, books and twitter feed, to know I can trust her. Like some of her other books, parts of it are just on the “safe” side of horror. (I’m so not going to read The Twisted Ones, which she says is horror and personally warned me to skip.) And a small part of it is so far beyond my usual boundaries that it would have been a DNF if it had been in chapter 2 of part 1 rather than in chapter 44 of part 2, when I wanted to know how it ended, confound it.

The whole thing reads like a really fun roleplaying campaign. Note: not like a campain writeup, those ramble more; like the campaign itself. I’d have liked to play in it, horror and all. Adventure! Carnivorous tattoos! Travel griping! A band of ruffians! (Well, always excepting Learned Edmund, who starts off as a clueless jerk but he gets a lot better.) I’m very tempted to steal the Shadow Market for one of my own campaigns.

A thing I liked a lot: the gnoles, their society, the way they live alongside humans and deal with them on their own terms. Their language idiosyncrasies: the way Grimehug uses “a gnole” as a first-person pronoun, the “gendered” third-person pronouns that actually go by caste.

A thing I didn’t like: the sexual tension between two of the protagonists first becomes a running joke, then it gets stale — before it gets resolved and things go pear-shaped almost immediately. Then it gets resolved again, somewhat elegantly (she says, grudgingly). Honestly I could have done without the romance and the sex, though the actual sex scenes are tasteful. It gets in the way a lot, except at the end when it’s instrumental for the closure of the story. I concede that that couldn’t have happened without all the buildup, but it still annoyed me. Other running jokes didn’t get stale, so it was probably my pervasive dislike of Inevitable Romantic Subplots and not something about the book itself.

This person read the same books I read: Part 1 – Part 2

Some days I don’t know if we’re even on our side.

Slate considered herself enlightened, but there were still times when she wanted to throw her hands in the air and scream, “Men!” and then stomp off and kick something.

… there are few things in life as steadying as someone you have to be brave for.

(which is absolutely true, I know from experience)

If I was giving stars, and I yet may if/when I make a Goodreads review out of this rambling, I’d dock one star for the horror and another for the romance and sex, and immediately add one back for the gnoles, arriving at a solid four stars. I don’t like to rate, partly because I’m always conflicted when giving stars: should I rate how good it is by some sort-of-objective measure, or how much I liked it? I think the latter, but always feel it should be the former.