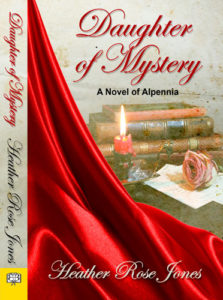 [Edit: I said this wasn’t a review, and I still don’t think it is — I wrote it as only thoughts and squee — but several people including the author seem to disagree. Ah, well, let it be a review then.]

Conversation in the swimming pool, the morning that I’d finally managed to download my birthday present (thanks, Carla at Bella Books, for sorting me out!)

Swimming buddy: Whoa, you’re late!
Me: Yes, I just got a book for my birthday and it was hard to stop reading.
Swimming buddy (who is also a reader): What kind of book?
Me: Historical romance, it’s set in about 1800, there’s this girl at a ball meant to catch a husband but I think she might prefer her godfather’s bodyguard instead, and it looks like the bodyguard is interested in her too. But I’m only on page 20 or so and anything can still happen.
Swimming buddy: Oh, that kind of book.

Goodness, was I right.

I didn’t tell her that the godfather’s bodyguard was a woman, because then the rest of the conversation would have been about that instead of about the book as such. My swimming buddy is convinced that she doesn’t know any LGBT people — and I know that she must know at least two bi people (including me) and one trans woman, because we all swim in the same pool at the same hours. I sometimes feel bad for not being more of an activist about that, but I like my quiet swimming hours and I don’t want to spend energy on something that’s likely to make those much more uncomfortable.

But anyway. I read this book in big gulps, keeping my e-reader in my pocket to read in between (and while) doing other things. After a couple of weeks I read it again, more slowly and making notes, in order to say something coherent about it, because after the first reading I was ecstatic but not yet coherent. And I still don’t know how much I’m missing because it’s romance (with some fantasy elements, true) and I don’t know these particular genre conventions. It’s possible to read it completely as fantasy, I suppose, like most Ruritanian-type romance can be read, but it’s mostly about the relationships between the people. Not only the two protagonists, but everybody, which is perhaps the most splendid thing about it. It might be set in the same universe as Swordspoint, with the notable difference that a lot of people are a good deal less nasty.

Or perhaps the most splendid thing is the way the author handles religion. Something that resonates strongly with me: the mystery in the Catholic church (I don’t know if there even is a Protestant church in the setting) made tangible because some people can perceive when a prayer is answered or at least noticed, and “the almost invisible glow that Margerit associated with the sacraments”. That it’s possible to cause miracles by getting the ritual exactly right took some getting used to, but <puts on liturgist hat(1)> I do appreciate the need to get ritual exactly right <takes off liturgist hat>.

Yet again, perhaps the most splendid thing is that the two participants in the romance are both women and that is normal. Daughter of Mystery is not an issue book. It’s about Margerit and Barbara, two people who are in love and have problems and overcome most of them and get each other at the end. In short, a romance. Some of the problems are “people think it unseemly” but even then it’s mostly about class: first Barbara is too low for Margerit, then after things have been resolved she ends up too high. Margerit’s aunt is — well, I think the word is ‘squicked’ — at one point, but this is strait-laced Aunt Honorat. Later, when the more lenient (more sensible, I’d say) Aunt Bertrut and her (sensible but very status-conscious) husband object to the relationship, it’s because of the class issue more than anything else: “Baroness Saveze is as high above you as you were above Barbara the armin.”  Before they are lovers, they have a hard time even being friends, except for the rare moments that they have the opportunity to meet in scholarship. For all that Aunt Bertrut urges Margerit to “turn [her] mind more to serious matters” this is what Margerit is made for, as Barbara sees very clearly.

I could squee forever about little things. “… a very ordinary man — the sort you might see on any street corner. But not on every street corner.” “… he was my father. … He’s mine to hate, not yours.” The intricacies of ‘mefro(2)‘, ‘maisetra’ and ‘mesnera’: “When I say ‘Maisetra’ to you, it means ‘beloved’, Always remember that.” –echoing Harriet Vane saying “my lord” to Peter Wimsey on their wedding night.

(2) Complicated by the fact that ‘mefroi’, plain ‘Mr’ in Alpennian, is very close to Dutch ‘mevroj’, meaning roughly ‘Missus’, used most often for a woman who pretends to higher status than she’s got.

And the names! I recognise Alpennian versions of common names bit by bit, with a little spark of smugness every time. Latest: Maitelen = probably Magdalena. I’d like to have a short or even a long overview of the Alpennian language.

I can’t resist reading LeFevre and his secretary as lovers too, especially when LeFevre bursts out “I don’t care to have him thrust into the middle of my intrigues!” And Barbara is my new book crush, right up there with Jane Brailsford and Faramir(3).

(3) In a tweet when I was first reading the book I wrote “Faramir and Jane Brailsford”, making it look as if Jane had married one Faramir Brailsford.

Liz Bourke said in her review “I think the coda at the end is entirely unnecessary” and that’s as may be, but I happen to like the kind of closure it gives. I’m also a sucker for the kind of 1970s US teen film that shows text or little scenes telling what happened to the characters afterwards.