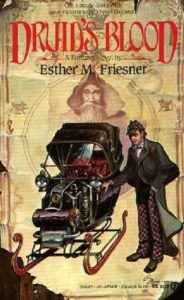 This is another of those books that have been on our bookshelf forever, and look somewhat battered so I must have read them, but which I’ve forgotten so much of that it’s like reading a completely new book. Well, I still knew that parts of it were darkish. (Horrific monsters too, but the author doesn’t linger on them and they get vanquished effectively.)

I remembered it –what I remembered of it — as a magic-next-door book, and in some ways it was: it’s an alternate-history Sherlock Holmes story, with Holmes’ and Watson’s names changed, set in Victorian England, of course. Here’s an overview of characters and a somewhat awkward summary (scroll down a bit or search for “Friesner” in the page).

I have two major gripes. First, for alternate history, the divergence is very early: in the first century AD, with Bran the Blessed booting the Romans out of Britain by magic and “collecting” all other chieftains’ magic to unite the country. I’d expect Victorian Britain to be much more different from what I know of this-world history; not with all structures intact, only done with magic instead of technology. TV Tropes has this to say:

In Esther Friesner‘s Druid’s Blood, magic works, so powerfully that the Druids stopped the Roman invasion and (presumably) any later invasions and kept Britain Celtic, but by the 19th Century London and the British look pretty much the same apart from details – teleported scrolls instead of telegrams, Beltane fires in Trafalgar Square (they did fight Napoleon, he was a Gaulish Druid), Queen Victoria as a witch, etc. But this is strictly Rule of Funny, since the point is to set a Sherlock Holmes adventure in a Celtic fantasy world.

People are called John, Jim, George, Charles, Augusta and Victoria, so presumably the Romans didn’t keep out completely. And some of the punny literary titles that get mentioned bear witness to that too: Lady Windermere’s Faun. That’s not Celtic mythology.

The second gripe came when I tried to work out exactly when it was set. Historical people, and historical fictional people, turned out to be alive all at the same time when they couldn’t have been. If I narrow it down maximally: going by one of the main supporting characters, Ada Lovelace, it must be set between 1838 when her husband became an earl and the late 1840s when she was too ill to do any supporting. But in the 1840s, most of the other important historical characters including the main villain hadn’t been born yet. Neither had Sherlock Holmes and Watson. When they go back in time a hundred years, it’s to meet someone who was in fact their this-world contemporary. Also, Ada’s father Lord Byron is in the story, and in this world he died when she was eight years old. Unless, of course, the fact of it being alternate history causes people to be born at different times, but then they’d probably be completely different people, wouldn’t they?

It looks as if Friesner thought “Oh! I can have this historical character in the book too, and that historical character!” Which would be all right if the book was much more frivolous, but it isn’t, it’s fairly serious fantasy with mythical and weak supernatural-horror elements. If it was less frivolous I’d have thrown it against the wall because the author clearly didn’t do her homework, but I think it was either a deliberate construction or a deliberate case of couldn’t-care-less. Much like setting a story in “the Middle Ages” without picking an exact period and doing enough research.

In a similar vein, there are several cases of rampant orientalism: Japan and India and China all on one heap, with Asia Minor thrown in for effect. Basically, everything outside Britain is exotic.

–oh wait, this would actually make sense if Britain had really been isolated for almost two millennia; but it’s too, well, modern and normal for that. And indeed the less-than-complete isolation is a plot point. Parts of it are excellent. The likeable characters are really likeable, the villains are very effectively villainous, and it’s sprinkled with splendid little details. The Very True Words in the otherwise rather weak first chapter: “Not everyone who desires privacy needs secrecy.”

I did have a bit of a feeling that I was supposed to guess what was what, as with the kind of magic-next-door fantasy that takes this world and renames places; that’s why I started to look up dates. I don’t know how much I’ve missed because I haven’t read much Sherlock Holmes, or because I’m not very well-versed in the Victorian period. And I’d probably have liked it more if it had been either more of a romp, or more of a well-thought-out alternate history.