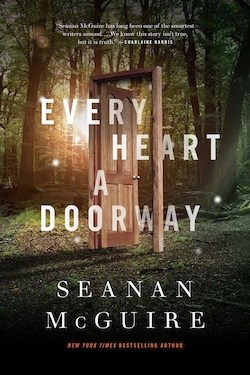 Seanan McGuire, Every Heart a Doorway

Tor.com gave it away last week, for once not only in the US and Canada, but all over the world, and it’s been on my wishlist for a while so I grabbed it. (Now I must be on that mailing list twice or three times; I’ll see if they cull their duplicates themselves or I have to remove my old subscription.)

It started so promisingly! Girl who has been through a portal to another world and is now back, distraught with longing, goes to a school that her parents think will cure her of the longing but is actually meant to teach her to come to terms with the distraughtness. The principal is a splendid woman, whose portal never closed but she can’t get through it because she’s unable to live in that world as a rational adult — she’s waiting until she’s so old that she can go there again.

Other students at the school are weird in various ways, some nice, some ambiguous, some nasty.

I said to Seanan McGuire once on Twitter that I loved her writing but couldn’t read any of it because it was too dark and creepy for me, so she pointed me to her Velveteen stories, and they weren’t dark or creepy and all was right with the world! Every Heart a Doorway seemed almost to be the same way at the beginning: problems, but no creepiness. The protagonist is asexual, her friend is matter-of-fact trans (these are important issues in their respective backstories but not in the story at hand, which makes it refreshingly not an issue book which it could very well be).

And then the murders started.

I think the book’s saving grace is the way the young people and the old principal deal with all the nastiness: McGuire doesn’t wallow in it as many a lesser writer would. Some of the things that would have made me throw it against the wall (metaphorically, I won’t do that to my Kobo) were touching, even beautiful, because of McGuire’s light hand.

There’s a sequel coming, and I’m torn between “ooh want want want” and fear that it will be creepier still because it’s about the girls apprenticed to a vampire and a mad scientist, both of which are things I tend to avoid in books. I want a book about Kade who was taken for a princess but turned out to be a prince (and when you write that, @seananmcguire, I’ll certainly pre-order).

Which reminds me of this story by Ana Mardoll: