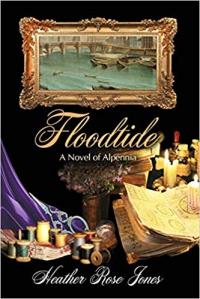 Another splendid Alpennia novel, set alongside Mother of Souls which I mysteriously neglected to review. I read a beta of it and the final version felt much better; I didn’t read the versions side by side but now it’s without a couple of scenes that made me cringe and go “eww, local colour I suppose”. (Heather, if you’re reading this: the brothel scene and its aftermath during the fever)

Warning: I don’t care much about spoilers. If you don’t want spoilers at all, don’t read on until you’ve read the book. Read the book anyway, whether you object to spoilers or not. You don’t need to have read any of the “main” Alpennia series to understand it, though I think it does help to already have some grasp of the setting.

We already saw a little of Roz in Mother of Souls but here she is head to toe, with her loves, her problems, her ambitions. I love the way she carves out a place for herself wherever she ends up. What the fortune-teller tells her comes true: “Three times your life will change before you know your path. But your path is on the heart and not the head.” And “what is wise is not always best” is also a very true word. It would have been wise to stay in safe employment with prospects instead of rushing headlong into her dream job (incidentally enabling her friend to follow her dream, too) but I’m confident she’ll land on her feet there, too.

I like the matter-of-fact religion, especially in combination with Celeste’s scientific approach to charms. I know the writer is not religious but that doesn’t keep her characters from it; and never does religion become just a tool of the oppressors, not even when Roz fails to make a confession because she doesn’t have the words and hasn’t learned yet that what she would have confessed isn’t strictly a sin, though the priest might have seen it as one.

The book is full of — currents, perhaps, like the river. Threads running through the story that divide and come back together, trails leading to larger connections, and I’m sure most of those are deliberate, but I’ll have to reread it a couple of times to see them clearly.

I admire Roz’ voice that stays consistent all the way to the end. I know how hard it is to keep that up, especially when that voice is completely different from your own.