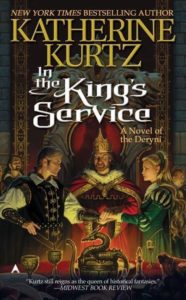 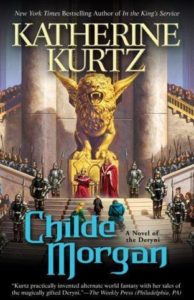 I don’t remember when and where I first came across the Deryni novels except that I was a  teenager and it was in England. There was only the first-written (but fairly late in the in-world history) trilogy at the time, now called The Chronicles of the Deryni: Deryni Rising, Deryni Checkmate and High Deryni. I snapped up the other books as they appeared and devoured them indiscriminately. Much later I discovered the alt.books.deryni Usenet newsgroup (don’t try to go there, it’s full of porn spam now, the last on-topic message was in 2008) and was kind of active on it for a while until suddenly I had a revelation: it was all trash. Stuff I was embarrassed at reading, and ashamed of liking, because I should only read Good Books With Meaning or it would make me a Bad Person.

Things aren’t that simple, of course. In hindsight I diagnose it as a bad case of “writers shouldn’t read”, because the revelation came around the time that I seriously started writing. At the worst stage of it I could only read Dorothy Sayers, Caroline Stevermer and Diana Wynne Jones without cringing. (But with despair– I’ll never be as good as any of those three.)

But now I’ve got an e-reader, and it makes me rediscover lots of old favourites. Somehow on the e-reader it doesn’t matter that something is trash. Perhaps it’s the fact that nobody sees what book you’re reading while you’re reading it, though I’ve set it to “show cover while in sleep mode” so everybody in the house sees what book I’m reading anyway. Perhaps it’s just that I’m older (and hopefully wiser) and dare admit that I like to read something fluffy at times. Because strictly it’s not trash –KK can surely write, and there’s a lot of thoughtful stuff in the books– but it’s fluff all right.

In the alt.books.deryni time I knew KK was writing Childe Morgan about the youth of one of the protagonists of Deryni Rising, Alaric Morgan. I think I read some teaser chapters online, because there were at least two times while I was reading the book that I recognised settings and events and even phrases. I was already planning to reread all the Deryni stuff when I found Childe Morgan in an ebook collection I already had, so I put it on the reader and dug in. Halfway through I found out that it was in fact the second of a trilogy, so I hunted down In the King’s Service and read that first.

Very disconcerting.  I knew from Childe Morgan that people’s friends and siblings had died, but in In the King’s Service I got to know and love them. I know, of course, that KK is very good at killing off sympathetic characters, sometimes for no apparent reason, it seems, other than making the reader wail, along with a number of other characters, “Why? Why? WHY?!” Is that for “realism”? See this post, and also the one that sparked it.

Yes, in the Middle Ages in the world we live in people died much sooner of things they’d survive with modern medicine, hygiene, resources and communication. Giving birth, being born, pneumonia, peritonitis, inflamed wounds. Characters also get murdered, executed, die in battle or have magical accidents, all completely appropriate for the story. I do wish, though, that KK wouldn’t dwell on it so; now I hardly dare like a character because I expect them to die more or less horribly anyway, and I’m not the kind of reader who wallows in that.

Childe Morgan ends when Alaric is four; Deryni Rising starts when he’s twenty-nine. There are tantalising glimpses in Deryni Rising of what happened in between and I WANT TO READ THAT DAMMIT. Yes, even with my favourite characters dying like flies. I know that KK was working on a third book in this series a couple of years ago and I wish she’d finish it already. I like Alaric a lot as a toddler, I’d like to see him as a growing boy and a talented teenager, and I’m very curious who teaches him all the stuff he clearly knows as an adult.

The setting of the Deryni novels is, as one reviewer puts it, “a medieval kingdom similar to those of the British Isles of the 10th and 12th centuries”. Most of the rest of the world is also similar though not identical to the world I was born in. This distracts me at times: I waver between thinking that I’d like it better if it was a pure fantasy world and wanting to figure out the correspondences. I like it that there’s Orthodoxy! Subtly skewed, like in-world Catholicism is subtly skewed from what I know of the this-world medieval Catholic church. I also like it that the “realistic” depiction of women doesn’t keep them from being scholars and artists and teachers and even politicians (though that last mostly covertly). It’s not alternate history, only an adjacent world in the multiverse. (Oh! I can use that to keep myself from obsessively seeking the parallels.)

I want to kick King Donal in the unmentionables. It’s probably another instance of “realism” that he leaves a trail of bastards, but wanting to sire a son on the wife of one of his friends for selfish purposes (to be the prince’s protector) not once but twice? (He succeeds the first time but the boy gets murdered; the second time the woman in question is (a) protected against coercive magic, and (b) already pregnant by her own husband.) This is a case of “I’m the king, so I can do what I want.” His son Brion is fortunately not like that, at least not in the very short time that we get the chance to see him as king at the end of Childe Morgan. His grandson Kelson actively (and successfully) tries not to be like that either. Donal is like that in all his endeavours. He butts in on a magical ritual because he is convinced he has the right to be in on it, and translates that in his own mind to an obligation. He marries off heiresses against their wishes. Alyce de Corwyn (de-facto protagonist of Childe Morgan) is fortunate that the man the king is marrying her off to happens to be her best friend’s father and her personal friend already so she’s actually happy about it, but there’s a great feeling of fatalism, “we’re women, we don’t have a choice”.

When I first read the books as a teenager I was thrilled with everything the Deryni could do, but on rereading (and reading further) I’m appalled by some of it. Not what they can do, but the ruthless way they make use of it: blurring or erasing people’s memory, messing with their volition, setting “controls” that are ostensibly for training purposes but are often used for coercion. And these are the good guys. This part of the Deryni books influenced Valdyas a lot –the way psychic gifts work, though in Valdyas it’s much less “magic” and much more only in the mind– but tampering with other people’s minds without their cooperation is what my bad guys do. A Valdyan reading the Deryni books would assume that all the gifted people are in the Guild of the Nameless.

The Camberian Council, too. They’re the quintessential super-secret cabal that rules the world. I admit that it’s intriguing and thrilling, but it’s also cringeworthy. They say they exist to prevent abuse of power but much of what they do looks like abuse to me. Most of them don’t balk at killing a child if he turns out to have the wrong kind of powers; it’s almost a relief that a real bad guy took care of that for them. They also arrange someone’s marriage completely against her will, as far as I recall by killing most of her family when she’s barely nubile, and are then surprised that she’s unhappy.

I used to love the Deryni books when I was younger, and I must admit I love them again, though for different reasons. I won’t call the cringe-inducing things “flaws”, though some of them probably are; others are probably authorial choices I don’t like. But then I don’t have to agree with a writer to like what she writes. The writing isn’t amazing, but not bad either: solid craft, shading to a hint of purple at times. There’s rather a lot of what I called “pomp and circumstance porn” in my previous post, like the meticulous description of a knighting at the beginning of Childe Morgan and some magical rituals.

I think I shouldn’t do any new writing for a while, not until I’ve shaken off Katherine Kurtz’s influence; she’s one of those writers. Much like an earworm.