May 2: So You Want to Be a Wizard, because I already had it open and noticed it while I was looking for some fanfic to read while cooling down from One Good Knight. Young Wizards is always a nice comfort read, and it might give me enough circumstance to finish the space meerkat story. (People actually want the space meerkat story!)

One Good Knight by Mercedes Lackey. Recommendation from Spouse when I told him what kind of thing I want to read now (“safe”, either well-known or guaranteed non-threatening). Wow, did it deliver. Some Goodreads reviewers hate it because the romance isn’t in the foreground but that’s one of the things I like most about it. If I was an artist I’d draw the princess leaning against the dragon, noses in the same book (and that would be a much better cover than it has now). I wish the fox had had the last word at the wedding, though! 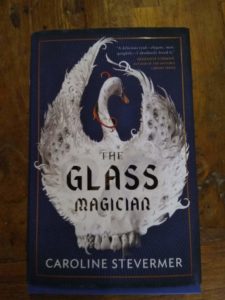 The Glass Magician by Caroline Stevermer. Wonderful. Spouse has it now but when he’s finished I’ll reread it and blog.

April 28: Knew you at all: novel-length Young Wizards/Labyrinth crossover. Rather messy but I wanted to keep reading to the end anyway even though it was ultimately unsatisfying.

Quiet Conversations: Damar. Aerin visits Harry in her (Harry’s) dreams. Makes me want to read The Hero and the Crown again — I reread The Blue Sword fairly recently but against my habits not both.

Eleven Echoes: Chrestomanci (Lives of Christopher Chant), a deep look into the life and motivations of Tacroy/Mordecai Roberts.

Betrothal Negotiations: Goblin Emperor fanfic in which Csethiro gets her way (with a sword!)

can’t fight against the youth: Goblin Emperor, Archduke Idra growing up. (Four stories with that title on Archive of our Own. It seems to be a song I’ve never heard of.)

Chenelo’s Treasures: Goblin Emperor, a collection of vignettes that turn out to have an overarching theme.

Catching the Snitch: Harry Potter, non-canonical pairings but the one we see (as opposed to just hear of) is excellent. (There are seven stories with that title, and a few more with a variant of it, on AO3! But most of the others don’t look like things I want to read.)

A Conundrum of Charms: Cecelia and Kate with letters from not only them but also their maids. Good voices, very true to canon.

The First Year After: Peter, Harriet and Charles Parker. Meh. Well enough written and ringing true, but not much plot, angsty, and confusing development. (First in this handful of stories that I’ll probably delete from my ereader and library.)

Get Me To The Church On Time: nice bit of Young Wizards fluff about Carl and Tom’s wedding. “an ordination from an actual religion that exists on this planet” — it’s the Archangel Michael officiating! That’s three actual religions at least, depending on how you’re counting.

Hello Operator, Please Give Me Number Nine: Dark (but not too dark) Calvin and Hobbes, or rather Susie and Hobbes.

The Hero’s Road: Damar, the end of Aerin’s mortal life.

April 26: A Jolly Kind of Detective Game, plain Lord Peter Wimsey fanfic by the same author as last week’s crossover, which explains the similar name of Hilary’s friend. Hilary and Jerry doing exciting things together and falling in love at the same time. Winifred has a role but not nearly as large as she merits: she’s as Ravenclaw as in the crossover. Happyish (though non-canonical) ending.

An Afternoon’s Adventure, in which the Dowager Duchess of Denver Honoria Lucasta and Miss Jane Marple turn out to be old friends.

Ladies who Lunch, in which the Dowager Duchess and Miss Marple become friends. By the same author but not the same timeline.

Like As The Hart, another domestic mostly-Harriet Vane story.