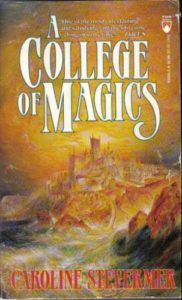 Caroline Stevermer, A College of Magics

I love this book to pieces. The copy I have is falling to pieces, and I may soon have to replace it with a hardback to go with its sequel, A Scholar of Magics. If it’s still in print, that is. (Or get an e-reader at last and try to acquire an e-book of it. but that’s Not The Same Thing, it makes books much more the same. Ah well.)

Caroline Stevermer isn’t my absolute favourite writer –that honour goes to Diana Wynne Jones, hands down– but she’s the writer I most identify with. If I ever get a novel published I intend to dedicate it:

To
CAROLINE STEVERMER
who I want to be when I grow up
It’s a school story, and an adventure story, and a bout of serious magic, not interleaved as a more conventional book might have it (frustrating me no end, making me go “Don’t interrupt! I’m reading this story, I don’t have patience for the other thing right now!”) but one after the other in a logical progression so they can all unfold at leisure. After all, it’s a three-part novel, like the ones the protagonist and her friends read instead of studying. I used to think I liked the school story best and was sorry when Faris and Jane (ooh! Jane! I think I have a crush on her (1). Must now reread the sequel, because more Jane.) and the others hared off to have adventures, but this time around all parts were equally delightful. I expect it to get better on every rereading, much like Fire and Hemlock or Gaudy Night.

(1) I can only think of two literary crushes at the moment –the other is Faramir (2)– though I’m sure I must have more.

(2) The proper Faramir, that is. The movie Faramir is… let’s not go there.

I love the “sort of this world with magic” setting, the interleaving of history and invention. (Goodness, some of the Goodreads reviews complain about having an additional country in Europe that “looks like a generic fantasy world rather than a real country”, never heard of Ruritania and that whole literary tradition? Also, “names like Faris Nallaneen and Jane Brailsford don’t belong in the same world”– what do they want, one single world language? In fact the existence of different languages is glossed over so seamlessly that I hadn’t noticed until now; let’s just assume that everybody with a modicum of education speaks French, the common language in Europe until quite recently.)

This was my fourth or fifth reading, and again I found lots of things in it that I don’t remember noticing before. The previous time was long enough ago that there were some crucial parts I didn’t remember: the nuances of Uncle Brinker, some of the magic– and the ending. I don’t think it is, as some reviewers have it, unnecessarily happy; if anything it’s necessarily happy, as it makes the difference between stasis and stability for Faris. I think I finally got it this time, complete with going back a dozen pages, “how did that happen? When did it happen? How could I have missed it when on hindsight it’s as clear as day?” and realising that the protagonist had missed it too, and she got it about a minute –in story time– before I did. Or perhaps I “finally” got it the previous four times as well, and it just doesn’t stop being surprising.

(Go and read Kate Nepveu’s review. Really. Then go and read the book if you can get hold of it. My copy you can only get from my cold dead hands.)