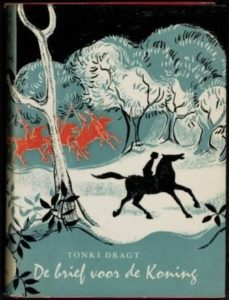 Another favourite book from my preteens and teens– perhaps a bit later than Ilja de kleine ganzenridder. It strikes me, now that I read it again after twenty years or so of Valdyas just as we’re having a bit of campaign with a difficult journey through a wood, how much of Valdyas has its roots in this book. Fortunately not so much that it begins to look like plagiarism, and not so clearly that people who happen to have read the book will recognise it except as “same ingredients, different soup”.

This is high on the list of Books That Made Me, along with Ilja and a couple of books by Paul Biegel that I haven’t reread and blogged about yet.

There’s actually visible religion. Clearly Christian visible religion too, for all it’s a fantasy world. Not all that strange for a book that starts in a chapel; there are monasteries too, and people pray occasionally. All as a matter of course, not as an issue, just part of the background. Chapeau!

I’m still in two minds about whether Tonke Dragt has a tin ear for names or only a very idiosyncratic style. “Tiuri”, the name of the protagonist, had a small brief flare of popularity when the book came out in 1962 and a slightly bigger flare of popularity when the film came out in 2008. It’s in fact an Icelandic name meaning “white star”, which I didn’t know for all the 40+ years that I’ve known the book. But I digress: some of the names are firmly in the “fantasy knight names” realm (Ristridin, Ardian), some are normal medievaloid names (Lavinia, Marius), some are variants that could be foreign (Jioesipu; the film-makers have taken that up and given the part to a young man with darker hair and eyes than the other four. More about the film below.)

I didn’t mind much when I was ten or so and devoured it for the first time: tin ear or not, everything just fits. This is, after all, a slightly alternate world.

What bothers me now is that the countries are called after their kings. Is the king’s name hereditary, or will the kingdom of Unauwen be called “Iridian” when the old king dies and his heir is crowned?(1) That would be inconvenient. And the other king doesn’t seem to have an heir, which is… embarrassing. There isn’t any mention of a queen either, but of course not everything must be in the book.

(1) ETA: or will the prince take the name Unauwen at his coronation?

I didn’t know enough English when I first read it to realise that the country to the south that does have a name, Eviellan, is in fact a bad case of Meaningful Name. It’s where the bad guys live.

Cities don’t seem to have names either, with Dangria as the exception that proves the rule(2). Other cities are called “The City of Dagonaut” (the king of the eastern country), “The City of Unauwen”, “The City of the North”, “Little City”, etcetera. Of course some actual names of real-world places also mean things like “Northern Capital” (Beijing) or, much eroded by the centuries, “On the Two Streams” (Leyden), but it does jar a little.

In spite of all that I devoured it again. The writing is pedestrian, sometimes a little awkward, sometimes with a hint of sentimentality, not elegant like Paul Biegel or coarse-but-agile like Guus Kuijer. But boy, can she plot. Also, tell a story in a way that makes the readers clamour for more. And there is more! Geheimen van het Wilde Woud is in my bag to read on the train tomorrow.

And seeing the film

When the film of the book came out in 2008 I didn’t want to go and see it, because I thought it would spoil the book for me. Also, I didn’t like the look of the film Tiuri, weak mouth and far too light hair. But now I had the opportunity and I couldn’t resist.

Well, it was splendid after all, and it would have made me reread the book if I hadn’t been in the middle of rereading it anyway. It cuts out exactly the right things –we don’t need an insurrection in a city, that’s okay for character growth and local colour in a book but would detract from the film– and gets the overall atmosphere right. It does suffer a little from “everything was drab in the Middle Ages” syndrome: it’s not until about halfway that someone in bright red shows up, admittedly a bit of a peacock in the book as well. (Yes, I know what colour peacocks are, that’s why it’s called ‘peacock blue‘.) The kingdoms are colour-coded: Dagonaut is in muted nature and forest tones, Unauwen is in muted jewel tones. Perhaps this is merely very cleverly done.

Another thing very cleverly done: at the beginning of the film Tiuri looks about the same height as his father; at the end, after months of adventuring, he’s clearly a couple of inches taller. And there’s an awesome scene in which he is learning a letter in an unknown language by heart, in a sweaty panic, while imprisoned and in danger of being searched. 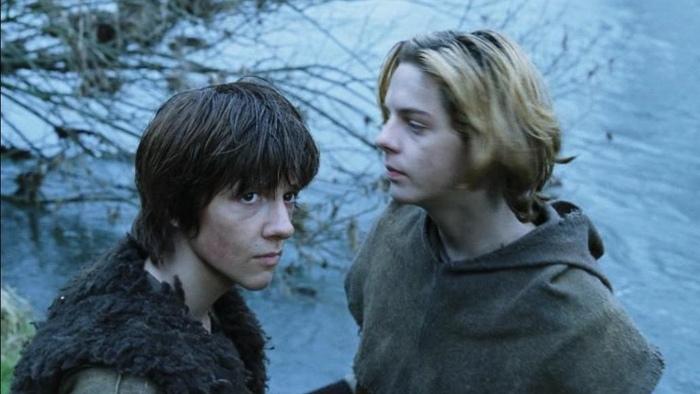 But still, I was right about the lead actor. The Faramir effect: my book crush who is completely disappointing on film. If I only had the film, or if I’d had the film first, my crush would be Piak.

The sequel is in the works, too. I intend to go to the cinema for it. Here’s the official film site.