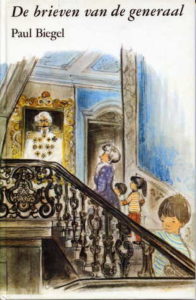 I love Paul Biegel’s writing style. Over time it grew, but didn’t change much; the difference between Het sleutelkruid (The King of the Copper Mountains) near the beginning and Man en Muis near the end of his long life is more in the way he handles the subject matter than in the style itself. And in this one too, little phrases occasionally make me giggle, or bring tears to my eyes.

De brieven van de generaal is written in an unusual viewpoint: first person plural, except when only one of the three protagonist children is active. It’s “we” throughout with a sprinkle of Bles (a boy), Orian (a girl, which threw me a bit because it’s also a Valdyan male name) and Knevi (a boy, probably the youngest). Note that these aren’t usual Dutch names; but their aunt Mathilde has a completely normal name, as do all the mice.

There are several concurrent storylines: the children’s story at their eccentric aunt’s house, the general’s story from the letters he sends to the aunt, the story of the mice that cross the lake in a toy boat, and the story of the sparrow and the siskin. All comes together at the end in a big finale– and then the children go back to school. In spite of that it doesn’t end on a disappointing “this was all a dream/a holiday/a standalone episode” note, because there’s a promise of coming back to the stories. Indeed there’s a sequel, Tante Mathilde en de sterren van de Grote Beer, which I faintly remember reading (from the library) and Secunda once wanted for her birthday but I think it was out of print then. [ETA: the sequel is disappointing.]