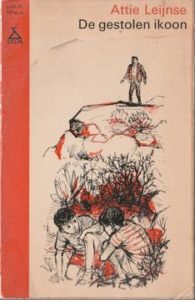 Not a single link that isn’t “buy this book here second-hand” or “I have this in my (historical) collection”. That is to say, only bibliographic information, nothing about the content. Serves me right for reading obscure books, probably.

This is actually rather well written for a 1960s children’s book by an otherwise unknown author. I think it was one of the things that formed my image of Greece as a child, which made me so politically aware in the 1970s that I did research in newspaper archives and wrote a long article for the school magazine about the Papadopoulos regime. But this is obviously before that, in an almost-idyllic Greece where the worst political trouble is a teacher strike –which seems to date it in 1963.

The author really likes her background. So much that fully the first half of the book is exposition– not infodump, but little things and side-plots and character development, people’s backstory being waved in front of the reader tantalisingly, and then she goes on with the main plot and does hardly anything with all of that. Even a promising sub-plot gets swept by the wayside. It makes me think that this was to be the first in a series, or at least a number of books about the same set of characters, but I can’t find anything about that. It might be an interesting thing to research if I happen to get to the Children’s Book Museum again. Indeed she seems to have written very little else, I can find a reference to something called De speeltuin (The playground) but without any actual information.

When the real adventure starts, around page 100, it’s a nice “boys doing their own thing in spite of adults” romp, nothing out of the ordinary except that it’s set against that splendid background. It’s a background that doesn’t ignore religion, for once: celebrating Easter and venerating icons are normal parts of it.