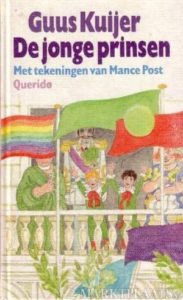 I remember this as a “kind of all right” book, probably because it came out when I was already an adult (in 1986) and I didn’t read it at the appropriate age. For this is, I think, very much a book to read when you’re about ten, the age of the protagonists, and not concerned about Kuijer’s social-commentary agenda. (Looking up some facts I was distracted by a whole tapestry of different  individuals and groups quoting him, alluding to his ideology, using him as an example of their own particular hangups; if you’re interested and can read Dutch I can recommend doing your own research, because that’s not what I’m writing and you might be interested in different aspects.) Bregje Boonstra, in an article I can’t find the original of but which is quoted here, says he “wastes energy rebuking the world”, which is probably exactly the reason his writing annoys me, however funny some of the details are. Unlike Paul Biegel he seems to be angry all the time, even when he’s having fun or making the readers have fun.

One point on his agenda is “children aren’t being taken seriously enough”, and while I agree with that on principle I don’t think making all visible adults incompetent, ineffective, silly and/or explicitly evil is the way to do something about that. Even the invisible adults –the presumptive princes’ hypothetical parents– are ineffective, because they stay hypothetical, giving a thoroughly unsatisfactory open ending. Lampshaded, even: it ends “And will they ever see their parents again? If they’re lucky they will. So we can only hope.”

I’m not tagging this post “invisible religion” because one of the antagonists (silly, perhaps evil) is a cardinal. Religion obviously exists, but it’s part of the problem, like the monarchy and the military. Kuijer is an atheist of the moderately hostile sort (and a hero of some atheist groups, as I’ve found), so I’m not surprised.

Still, it was fun to read again because of the really small details I probably missed the first time, “he stares at Petronella as if she’s a hippopotamus” when one protagonist’s aunt says something outrageous, the cheerful insubordination of the teacher (but he’s another ineffective adult, though the boys had high hopes of him), the cardinal’s pink underpants with little Donald Ducks that “gasp for breath” when the cardinal loses his temper. Also, Mance Post can draw.