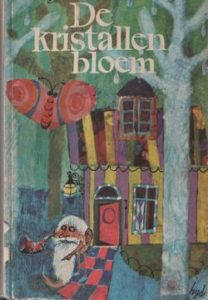 I’m glad I was nine when I first read it, because one of the authors is someone I wouldn’t voluntarily read a book by now — he’s mainly known for pop-sci books about practical witchcraft in which he gets most things spectacularly wrong. Most of De kristallen bloem is cheesy, but in a good way: a nice fluffy romp. And surprisingly well-written at that. It reads as if the authors had lots of fun writing exactly what they liked.

The premise is that when a Very Messy Person loses something for the eleventh time (the eleventh thing they lose, not the same thing 11 times over), creatures from another world are entitled to come and get it. These creatures are Papels, small globe-men like a toddler’s drawing (the one on the cover is Balbol the Old and Wise Papel, who alone of all his people wears a long beard because he’s Old and Wise). The protagonist, Robbie Ribbel, has lost his math book and stumbles on an entrance to the Papel world when on his way to get another one from the school principal. He meets not only Papels, but also various animals, as well as other people from our world such as an opera singer who has lost her voice, an ex-prime minister who has lost the election, and King Louis XVII who, er, has got lost. Add Dirk the Dragon in the Shoe Forest, an evil sorcerer who turns everybody into furniture, and the completely useless genie of Robbie’s magic whistle: instant fun.