I’ve been rereading the Elemental Masters series by Mercedes Lackey (and have now also read all but one of the new books in the series) and I intend to write at least a little bit about each one. Too much for one post, though; I’ll see how far I get. Don’t expect elaborate reviews: just reading notes.

SPOILER WARNING. If your enjoyment of a book is spoiled by knowing parts of the plot in advance, please stop reading now and read the books first. Spoilers never bother me, quite the contrary, so I won’t try to guess what may or may not annoy my readers and just write everything I want to write. Anyway, most of these are fairytale retellings or adaptations: we already know how it ends.

I’m in two minds whether to number the books like Wikipedia —The Fire Rose as number 1– or the way DAW Books numbers them, skipping The Fire Rose entirely because, after all, they didn’t publish that (Baen did). I think I’ll go with the latter and start, nerd-wise, with 0. That way I can call the books what it actually says on the book and have less chance to get confused halfway through. 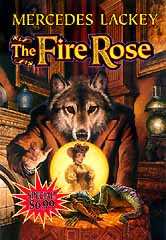 It’s Beauty and the Beast, told without the “father gets lost in forest” wrapping story: the protagonist is an orphan, and the Beast wants specifically her to come and live in his house because of her skills, not a random girl in payment for a traveller’s transgression. Lackey is very good at making surroundings come alive, and the descriptions of luxury are splendid. The characters, except for the Beast and the Beauty, are less detailed, more like a rough painting with a few salient markers picked out. The evil secretary,  Paul, is my least favourite kind of villain — not love-to-hate but just plain ewww. Sexual depravity as a marker for evil, check. And dwelt upon as well, though not in graphic detail: Paul makes elaborate plans, and carries them out, but we see only the planning and a hint of the result. Paul’s mentor Simon Beltaire, who is the Beast’s real nemesis, is done better but still almost a caricature. I wonder if Lackey has the same problem I have, in that she finds it much easier to deal with good than with evil. But unlike me, she writes extensively about evil anyway. (This problem becomes acute in Steadfast: evil doesn’t appear there until about 3/4 in, and then it’s devastating.) It doesn’t help much that I still can’t get my brain around why someone would be evil (well, in Unnatural Issue the villain at least has a reason), I don’t see the attraction of power at all. Power to do something, yes, competence, knowledge; but not power over people.

I don’t know enough about Chinese culture in San Francisco in the early twentieth century to be able to say if that’s (a) realistic, (b) romanticised, or (c) cultural appropriation. Probably mostly (b) with a small helping of (c). [ETA: Someone said that you can’t accuse someone of cultural appropriation if you don’t belong to the culture you think they’re appropriating, or you’re guilty of it yourself. Eeek! Can’t get out of this catch.]

And then the magic. “Realistic” isn’t the word for it, but it’s absolutely believable. The world is firmly a Magic Next Door B world: magic exists and some people know about it but it’s mostly outside people’s field of vision. When the Beast Jason Cameron and Beauty Rose do a ritual to find a book they need, even the smallest details (Rose can’t see without her glasses so she has to hear from Jason what happened) are just right. In fact, the Elemental Masters grew on me so much in my bout of rereading that I had to make an effort not to have the concepts seep through into Valdyas.

Here I start squeeing because it’s got MAYA WITHERSPOON. And PETER SCOTT. And also Peter Almsley, who is a blatant Lord Peter Wimsey tribute (which, if anything, makes me appreciate Lord Peter Wimsey more because I can now see him in this light as well).

It’s based on Snow White, which doesn’t show much except that Maya has seven, er, pets– it’s unclear at times who is whose pet. Also, she gets tricked into a coma by her nemesis disguised as an apple-seller, and saved by a kiss (or rather, by the love expressed in the kiss). But that’s about the whole of it: the story is about family, and tradition, and doing the right thing, and dealing with prejudice, and like all the Elemental Masters novels about learning to use one’s innate magic.

The villain here, Maya’s aunt, is squicky-horrid but I’m not as repulsed by her as by Paul in The Fire Rose, possibly because it goes with the theme of the dark side of Hinduism. (And again, I’m not sure how much of that is authentic, and how much is fantasy-based-on, and how much is cultural appropriation.) I can just hate her like the light-side characters do .

This was my second reading, as with most of the other books except The Fire Rose which I’ve read several times more, and anything from Home from the Sea on which I read for the first time on this binge. I think I read a slightly different book from the first time, especially as I knew what was coming so didn’t get any unpleasant surprises. (“Unpleasant surprise” is usually a tautology for me, especially in books.) Reading a slightly different book is one of the great joys of rereading.