I wanted to say which one of the series is my favourite, but (a) I can’t decide, every time I choose one there’s another that I remember more fondly; (b) I don’t actually like rating things; and (c) it tends to change with my mood. I was also going to say which is my least favourite, but that one has good parts so extraordinarily good that it balances out, sort of. (Unnatural Issue, and I’ll explain when I come to it.) I do like them all, and I’ll probably read every one of the series again at some point.

2. The Gates of Sleep

Here a salient thing about the series becomes very visible: Lackey builds up a whole world for the protagonist to be comfortable in and then destroys it in one fell swoop. So much so, in fact, that I’ve learned to distrust any good thing happening to the protagonist, and especially a whole series of good things! It’s like Katherine Kurtz setting up nice secondary characters who get killed so I don’t even dare like them any more. My earlier reading was long enough ago that I’d forgotten when to expect the turn, I only knew that it was coming, so I was cringing for quite some time. There must be readers who actually like that kind of thing. (Yes, I know there wouldn’t be a story without bad things happening to the protagonist, but it’s the extent of it, the knowledge that all this is just being set up to be broken.)

We have Sleeping Beauty here, with a whole bunch of good “fairy” godparents, Elemental Masters of the homey, unspectacular kind. Also Elizabeth Hastings, who is somewhat more spectacular (she wears her designer clothes as a sort of armor) and does a very good job teaching Marina to use her gifts.

(Argh, trying to quote other people’s reviews but everybody seems to have read a different book, not only different from what I read but also different from each other. It would help if about half the reviewers didn’t seem to be disappointed because the romance isn’t in the foreground, making me want to yell THAT’S NOT WHAT IT’S FOR, PEOPLE!! Anyway, the romance is okay for me, more than one couple of the right people get each other.)

The villains’ villainy is very well done, shiverworthy, though I can’t completely believe in it– a teenager lying about his age to go to seminary and get ordained so he can get himself defrocked in order to celebrate the Black Mass? He doesn’t seem to be very strong-willed at the time the book is set, I can’t imagine that he had that much initiative in his teens. But perhaps his mother put him up to it.

Refreshingly against the overall tone of the series, here’s a vicar who does elemental magic himself. Most masters and mages seem to be pagans, or “spiritual but not religious” avant la lettre, possibly because Lackey sees Christianity as a religion for uninformed people. (This is conjecture, and it only comes from this particular series, because all other Lackey I’ve read was set in worlds with gods of their own.)

Another running Elemental Masters theme, which Lackey shares with Tolkien: industry = evil, in this case because pollution is bad for elemental magic. Well, the kind of industry that the villains are running is evil, but it’s cleared up by abolishing it entirely, not by trying to make it better. Also, sexual depravity as shorthand for evil, a facile trick I’m trying very hard to avoid in my own writing. I concede that it’s impossible to be good while indulging sexual tastes that hurt other people, but can’t you be evil by indulging different tastes that hurt other people? The villains do that too, in fact, mostly lust for power, which is a motivation I accept though I still don’t really understand it. (I do understand a lust for money. Money is nice. But in my opinion not important enough to become evil for.) 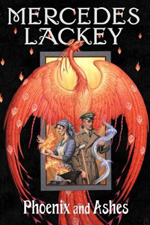 If I do rank, this one comes in high, mostly because I like Reggie. It’s a bit disconcerting that his first name is the same as that of a villain in The Gates of Sleep, but that’s my own fault for reading them back-to-back, Not that they have the same name of course, but that it disconcerts me. It’s normal for different people to have the same fairly common name, after all, even though novelists usually try to avoid it unless it serves some purpose.

There’s a love-to-hate grandfather who gets put in his place, a brief appearance of Doctor Maya Witherspoon, and a strong heroine, though reviewers on Goodreads call her whiny. (Goodness! did they even read it?) She frees herself from her plight, slowly, because persistence is the way to do it, not a sudden burst of violence.

I love what Lackey does with the fairy godmother. A witch godmother, more like! And I like it that this one practically starts with the protagonist in trouble, rather than having her happily established for numerous chapters and then thrown into the soup.