I must either do the rest of this quickly before it all fades from my mind because I’ve got lots of new books to read on holiday (Hild! and the makings of a Willa Cather binge if it turns out to be as readable as I’ve been led to believe) or leave it until a later reread. Or blog on holiday, of course.

4. The Wizard of London

This is an adaptation of The Snow Queen, a fairy tale that I remember not liking much as a child, though reading up on it makes me think that I might like it now. (Good Gutenberg! More holiday reading!) I do like most of the people in The Wizard of London, especially Isabelle (a human person) and Neville (an avian person). Nasty villain though, not properly-villainous-nasty but sickening-nasty, with some horrorlike traits. That’s the main villain, not poor Lord Alderscroft. It does explain some of Lord A’s idiosyncrasies.

Everything at the school is splendid and reminded me of the best bits of A Little Princess — making me fear that there would be a similar turnabout in Sarah’s fate. [ETA: Perhaps another quiet tribute. The Little Princess is called Sara, after all.] Fortunately, when disaster hits as it must in any Elemental Masters book (a) it hits other people and (b) there’s a way to fight and overcome it.

Minor nitpick: a better copy editor/proofreader would have been no luxury. Case in point: Isabelle is indiscriminately called Mem’sab and Memsa’b. It goes for the whole series, in fact, but this particular detail made me acutely aware of it. 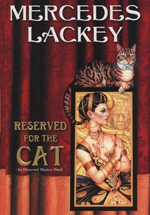 5. Reserved for the Cat

This one is delightful. Puss in Boots, of course, and the cat is very catlike though eventually he turns out not always to have been a cat. I don’t know if I like all the deception that Ninette perpetrates, but it’s functional at least, and she is not the trickster.

I like all the trappings of the music hall, a world I didn’t know until now. I must say that Lackey certainly does her research, because this is a world that vanished long before she was old enough to hold a pen. (Not that I have any first-hand knowledge either! But it feels very real and true.)

Villain: of the disgusting sort, but scheming all the same. She (it?) fails when the disgustingness overcomes the schemingness, in a fit of poetic justice.

Oh, and the spunky Scottish maid Ailse is splendid, especially when she catches a nasty earth elemental thingy in a cast-iron pan and keeps the pan in case they have to catch something else in it.