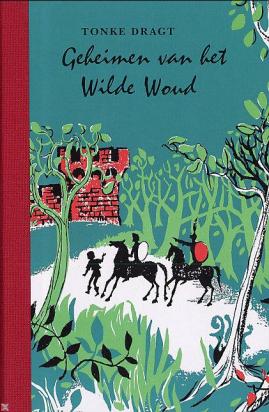 This is the sequel to De brief voor de koning, and I’ve always liked it less without knowing why. After all, it was about the same people, and a lot more people like them. But I think I may have laid my finger on it this time around: Tonke Dragt can plot, but she writes only the outside. Which is okay for adventure but Geheimen van het Wilde Woud is full of politics and psychology and it just falls flat. There are lots of hints of hidden depths below the surface but once we get close it turns out to be just reflections: mysteriousness for the sake of being mysterious, not because there’s a real mystery. Also, though less often, adventures for the sake of having adventures, not because there’s a real issue.

This is a recurring problem with Tonke Dragt’s writing for me. I used not to notice –even think that the mysteries were real mysteries– but I think that doing some writing of my own has made my vision clearer. (Rather than gaining years or even reading experience, I mean.)

I also suspect that the setting is secretly Storybook Land after all– an eclectic mishmash of the good parts of the very broad Middle Ages and perhaps even early Renaissance. Nothing against it, of course, but it’s useful to know. I suppose the film-makers knew too: one song sung at a castle in the film was to a tune first written down in 1539, even in the Netherlands hardly the Middle Ages any more.

There’s a lot of Noble Savageness, another thing I like so little that it makes me like an otherwise good book less. The hereditary leader of a tribe who is so detached –and demands of his whole tribe to be so detached– that he lets the bad guys pass to invade the country of the good guys “so it can be concluded as it has been ordained.” I don’t see that as all that noble, but perhaps I’ve been reading too much C.S. Lewis lately.

And then there’s this girl of nineteen at most who decides to spend the rest of her life pining for a knight at least twice, perhaps three times her age who has told her that it’s useless. Well, let her! She wasn’t for the protagonist anyway, because there’s a much nicer spunky girl who has set her eyes on him.

I do still like it; only less than the other one. It stays on my list of Books That Made Me (which I’m actually writing down in dribs and drabs) regardless.