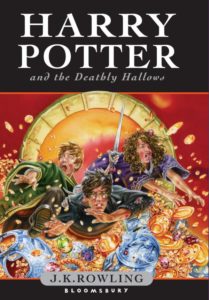 Not such a reading binge as Miss Marple or the Elemental Masters, though we had a film binge: all the films in the course of a couple of months, two a week on average. We started at the beginning –how cute they are!– and ploughed through all eight, even the ones we kind of dreaded, like The Order of the Phoenix in which Harry is angry at everybody and everything all the time, and The Half-Blood Prince which is a splendid film but full of pain.

(Of book 4 and its film I’d rather not to say too much. The book is arguably badly written, definitely badly edited, and I think it’s impossible to understand the film if you haven’t read the book, though I can’t speak from experience there.)

I reread the Deathly Hallows book to see if the films really were better than the book, and I think they are: tighter, more consistent. The first film, like the first half or more of the book, consists mostly of interminable bitching in a tent in various bleak landscapes, which made us roll our eyes because our own offspring are not all that much older than these teenagers (and still younger than the actors were when they played the teenagers) and it was all so recognisable. But even that has its moments of brilliance, mostly in character interaction.

The second film– wow. Well, except for the opening that continued from the first film’s cliffhanger and will forever make me think of the WB logo as the Dark Mark. But Neville. Neville. The day after we’d watched it I went to the supermarket with a daughter and one of the young men in store uniform was so much like him in looks, stance and voice that I’d have pointed him out if the daughter hadn’t been Tertia, who already has a boyfriend who is physically about the opposite of Neville, but in a similar way both shy and brave.

I still don’t get the whole Harry Potter hype — it’s not as if these books are all that good, and especially in the middle of the series they’re very sloppily edited, as if Rowling was coasting on her fame and not listening to her editor. Even towards the end of the series they suffer from “kiddie book” over-explaining, which, say, Diana Wynne Jones has always refused to do because adults need things spelled out, but children don’t. And it can’t be just marketing either, because the hype started right with the first book when, as far as I know, nobody knew how big the whole thing would become. The world is inventive enough for a kids’ book, but when the story grows to a much greater scale there turn out to be holes in it large enough to drive the Beauxbatons coach through.

Why does the wizarding world even exist? How does it exist? There doesn’t seem to be a single occupation for wizards that isn’t wizarding, unless you count landlord/lady of an inn and Knight Bus conductor. There’s a huge administrative overhead: it looks like eighty percent of all available jobs are either at the Ministry or for the Ministry. Hogwarts is a vocational school. Wizard children have to get all their general education in their first eleven years of life. Everything taught at Hogwarts is magic; there’s no mathematics except Arithmancy, no history of anything except magic, no languages, no domestic science even. Molly Weasley must have taught herself to cook. And Dumbledore is right that they sort too soon: it railroads people into a cultural ghetto on the basis of their outlook when they’re eleven. I don’t think the Sorting Hat can actually tell the future. No wonder that wizards can’t function in the muggle world.

That’s not to say the books aren’t fun to read, or that they don’t touch on deep human issues, but all those questions are rather distracting, especially on rereading. I don’t know whether Rowling realised when she started on the Philosopher’s Stone what she was letting herself in for.

Case in point: Snape who turned out to have been a good guy all along. That he tries to protect Harry in the Quidditch(1) game in one of the early years might be a foreshadowing, but mostly he’s set up as the character we love to hate. I’d have liked to have some more pointers to his underlying loyalty and tragedy, and not get it all in one Pensieve dump in a late chapter of the last book. Also, every time I do the math I’m amazed that James, Lily, Severus Snape, Remus Lupin, Peter Pettigrew and Sirius Black are all the same age– Snape is about forty at the end. I suppose tragedy makes a man older. (It reminds me of my nemesis the German teacher, too, who was twenty-seven when I was thirteen and terrified.) I don’t get what Lily saw in James either– a bully and on top of that a nasty species of prankster. That we see him only through Snape’s eyes may have had something to do with it, but I’m afraid he really was a bit of a bully from the snippets of history we get.

(1) Another of my pet peeves: Capitalitis. I’m tempted to write ‘quidditch’, like muggles play rugby, not Rugby.

Back to the Deathly Hallows: perhaps it should have been two books as there are two films, because it seems too full of “this ought to be in it as well”, more stories than a single book can carry. I understand that it’s still a school story: seven years of school, seven books, even though the protagonists don’t go to school that year except to fight in the battle. And that’s a good battle!  I wrote a total of one battle (in the book I’m currently trying to pummel into shape) and I know how hard it is. My only complaint about the Battle of Hogwarts is that Remus and Tonks both died in it, which feels a bit like “kill a couple of people everybody likes to make a point”).

What I’m not even touching (which doesn’t mean I haven’t given it thought): Grindelwald, Durmstrang, the Dark Arts and the whole convoluted cross between Nazi Germany and Imperial Russia. Dumbledore’s less than spotless past– I don’t think he’s ever grown out of his benevolent-dictator ambitions. Snape is absolutely right when he balks at Dumbledore raising Harry as a lamb for the slaughter. And Harry and the others not being told what’s going on, but given clues to guess — I suppose that’s the children’s book trope of ineffective adults.

Now I want to read a whole series of books and see a whole series of films about Albus Severus Potter and Rose Weasley.  I do hope Rose ends up in Ravenclaw, where her mother ought to have been. She isn’t destined to be the sidekick of someone famous from infancy.