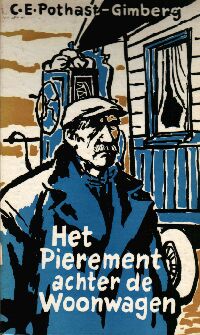 Another of those books from my childhood that can only be found on second-hand-nostalgic-books sites, and very much in passing on academic and slightly academic children’s literature sites. I remember first reading it at the house of a friend of my parents, at a boring adult (not in the XXX sense) party, where the grown-up (I thought at the time– I must have been about 7 and she in her mid-teens) daughter took pity on me and gave me something from her bookshelf to read. For years and years I only remembered one scene– no, one phrase: “Doe open voor mij, Floris de Vijfde, de jongere!” (“Open for me, Floris V, the younger!”) said in a dream, building on a daydream, by the fourteen-year-old co-protagonist. When already grown up I bought a copy of my own and either never reread it until now, or read and instantly forgot it.

Because it’s a very different book from what I remember. When I was seven it was exotic, about real people in a totally fantastic setting. Now it reads like social commentary, though I’m not sure if it was that when it was written, in 1955. It might just have been realistic for the social classes it’s set in: travellers and labourers. At the end, the fourteen-year-old and his slightly older sister get jobs with a coalman, he as an apprentice and she as a housemaid, and they see it as a step up.

I still like it. Perhaps I should say “I like it again” because I’d completely forgotten it except for that one bit. It has a happyish ending without full closure, the people are real people, their culture feels real, quite alien to me but not as grating as some books I borrow from my daughters that are set in present-day lower-class families and everybody seems to be a delinquent,  or unhappy, or suffering from mental-health issues, or a combination of those. It doesn’t say anywhere on or in the book what age it is for; I read it at seven, but I think the friend’s daughter estimated my reading age correctly and it’s aimed at the early teens.

It’s a story that probably can’t happen at the present time, if only because the people would be stuck in a net of regulations. An organ-grinder suddenly dies, his brother comes back from sea to assist the widow and family, children aged 15, 14, 7 and unspecified younger (but probably about 5: she doesn’t go to school yet but can think, make decisions, talk intelligibly and do small tasks; she even rescues a newborn foal from falling into a ditch by hanging on to it with all her strength and shouting for help). The story focuses on the elder three.

Riek, fifteen, goes to live at her old schoolmaster’s house as a maid. Her mother and uncle don’t really trust it– the master is a pleasant man but his wife is a bit of a vixen, and indeed the moment Riek crosses the threshold the mistress starts giving her a hard time. She’s been promised a free afternoon every week, but from the first time it gets taken up by mending. She’s been promised a room of her own, but what she gets is a curtained-off corner of a draughty bare attic. She’s been told the laundry is sent away, but she has to do it all by herself, by hand. And on top of that she can do nothing right in the mistress’ eyes. She realises at some point that helping her mother in the house hasn’t prepared her for real work, and that she was expecting far too much, but it’s clear that the abuse isn’t only through her eyes, it’s objectively real. Even one of the daughters of the house tells her so (“mother is like that sometimes, you were supposed to have the little room, I don’t know why you didn’t get it”), which gives her the courage to run away when it gets unbearable. Then she discovers, when cleaning the little trailer, that she’s really learnt to work.

Seven-year-old Kees has to go to school so he’s put into the poorhouse. That didn’t register immediately on rereading, only now that I’m writing it up in English so I had to look up what exactly “bestedeling” meant: someone, usually a child, who is being kept by the (local) government because they and/or their family can’t take care of their own keep. Now I also know why he asks anxiously “do I have to wear institutional clothes?” The poorhouse is run by sisters, but it never becomes clear whether they’re Catholic nuns or Protestant lay sisters or just nurses (as in ‘childminders’ not ‘paramedics’) called ‘sister’.

In the meantime their brother, Koos, fourteen, goes with the organ and really learns to work under the eye of his uncle, who is strict and gruff but, as Koos realises, a good man. Koos is a dreamer– his daydreams, and occasionally night-dreams, are a recurring motif in the book. It speaks for the author that dreaming as such isn’t pictured as a bad thing; only it shouldn’t keep you from dealing with the task at hand. He thinks up a name for the organ, and his uncle accepts it without discussion: this is when he starts considering himself an adult, though some of the established adults don’t seem to see it that way yet. When Times get a bit Hard, Koos tries to earn money for the family by hiring himself out as a farmhand, unsuccessfully as it turns out, but he gets a lift from the coalman who offers him work. At first he thinks it’s beneath him (what he wanted was to be apprenticed in the coalman’s other trade, motor mechanic), but then he takes the offer anyway and it turns out that he likes it. Also, it’s convenient to be an organ-grinder in summer and a coalman in winter. He’d probably have been clever enough to continue at school, but there’s just no money for it and it doesn’t fit his home culture. (This becomes painfully evident when the people with the cart encounter Mr Klomp, who used to be in military service with Uncle Tinus– he’s not at all stuck up, but he is a high-school teacher, and the travellers never lose that last bit of deference. He also helps them with various things, trying very hard not to look down on them but I don’t think he quite succeeds.)

As seems to be usual in mid-twentieth-century children’s books, religion is invisible: no communal prayer, no mention of church though many Sundays pass, no matter-of-fact prayers by characters. There’s a lot of moralising –most of it having to do with work ethos and respecting your elders– but none of it has a Christian or otherwise religious flavour. I have an inkling that the author may have been Protestant (though I can’t find any proof), but the publisher is socialist, so it could be an editorial decision.