Here’s the first of the promised rereading posts. Note that this is not a review, just random observations. I’m handicapped by the fact that this is probably the first post ever that’s about this book, rather than being a mention on a book-search or used-books site. The Dutch Wikipedia doesn’t even know the author. 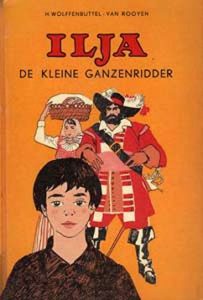 I have the 1958 three-in-one edition. There aren’t any obvious breaks in the flow, so the three separate volumes (which I’ve never seen) must have been edited into one story very competently.

This was my absolute favourite book when I was nine or so, and I dressed up in page-boy clothes –I had the haircut already– and was peeved that all the girls in the book were far too girly. One weaves and sews in an enchanted cottage, one is rich and demure in a castle, one is poor and sick (but sweet) and waiting for her brother to come home from sea… you get the idea. I seem to have liked it only a little less for that at the time.

I still liked it on rereading, but the virtue, oh my! Ilja is almost too much of a proverbial good boy, doing a good deed every day to keep the evil sorcerer away. And indeed, when he hasn’t had the chance to do a good deed the evil sorcerer promptly carries him off. It’s also full of– well, I won’t call it bigotry (though there seems to be nobody at all of a different ethnicity [1]), but a certain kind of prejudice, being able to tell from someone’s looks whether they’re a good or an evil person. But this is subverted, in TV Tropes‘ terminology, by Ilja’s foster-father in spite of himself, a sea under-captain [2], who is the diamond-in-the-rough type. Also, there’s the good-by-birth trope: the protagonist is a foundling and has manners and virtue far above his station. His foster-mother, an excellent woman, must have had a hand in that, but it’s said explicitly several times that he must be of noble birth because he has noble manners.

[2] Not to be confused with an undersea captain.

There’s no sign of religion, though all the signs of virtue have a very Christian flavour. You’d expect young llja to kneel for his evening prayers, or cross himself, or call on the Virgin Mary, at some occasion, but he just doesn’t. And all the bells of the city ring for him when he comes into his birthright, but it’s never said that they’re church bells. This same author wrote Geschiedenis van het Oude Testament and Geschiedenis van het Nieuwe Testament, “History of the Old/the New Testament”, published in a propaganda drive for biblical history in the Catholic family, so I wonder why she didn’t just come out and do it– perhaps because she balked at having magic (evil sorcerer and his wand-wielding servant, good butterfly fairy, enchanted stuff, bells not ringing until the real prince was in town) and Christianity in the same story. There’s far too much anachronism in the story for it to be a pure fairy tale [3]; this almost feels like a setting that ought to have the church, except that it’s been edited out. Like the Russian fairy tales book from the communist era I used to have, in which all crosses on the onion-dome towers had been carefully retouched out of the illustrations.

[3] Now that I write this: the emperor (but no kings), the army and navy, the peasants, artisans, houses and inns have a sort of seventeenth-century feel, the food is more nineteenth-century, and then there are knights and castles. I think this is Storybook World without any real historical relevance. Didn’t bother me when I was a kid, but now I notice, of course.

One pet peeve that did bother me as a child already: cringeworthy names. Not all of them, and in general the more annoying a character is the more outrageous their name– the nasty neighbour is called Mareemoetsa, her wimpy son Errebrem. (One really nice character is called Saskewietsa, a name in the same “not quite a name” category but a bit less cringeworthy.) Also, REALLY IMPORTANT names are printed IN ALL CAPITALS. That last is probably a sign of the times.