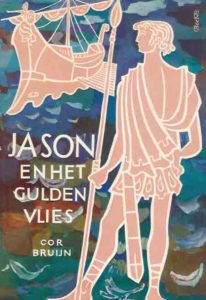 Like Ilja, de kleine ganzenridder, this appears only on used-books sites. There’s one mention on LibraryThing but that gives no information at all.

Getting this book from the library in my very early teens was part of the reason that I wanted to go to grammar school. (And never regretted that I did — my Greek curriculum was much more Homer-oriented than that of my daughter who is doing Greek in grammar school now, and we read whole chapters of the Iliad and the Odyssey.)

Reading this version again was a strange experience. Parts were as glowingly mythical as I remembered, and parts were –well, intentionally over the head of children, I suppose. And indeed, the author says in the afterword “I did not recount everything that is known about [the voyage of the Argo]. I left out episodes I thought were less important, and added a few elements –for instance, the relationship between Jason and Hypsipyle– to make the story more acceptable to the modern reader” (emphasis mine). I think I could do a close reading on the whole book and find all the places where he made the story more acceptable to the modern reader; and I suppose I’m not a modern reader in that case. He also left out the horror story about Medea and had her and her sons stoned to death instead, explaining that different sources have different versions and he picked the one he preferred. I don’t know which one I prefer (I remember reading the other version somewhere else), whether I’d rather have Medea evil or unhappy.

But yes, my eleven-year-old self was cheering on Jason and the Argonauts the same way as on her first reading. She at least, with teenage coarseness, prefers Medea evil.

One thing I don’t remember having noticed the first time (granted, it’s forty years ago): Pelias sent them to Colchis to retrieve Phrixos‘ bones and incidentally get the Golden Fleece; they left with the Golden Fleece, with Aietes in hot pursuit, without even thinking of Phrixos’ bones until they got back to Pelias. This time I said “wait! what about Phrixos’ bones?” the moment they were fleeing, perhaps because I’ve been writing a lot myself in those forty years and I’ve acquired an antenna for continuity.