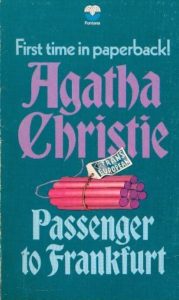 I wonder why there’s a pack of dynamite on the cover of the edition we have, because while there’s a lot of explosive stuff going on (especially in interpersonal relations) there aren’t any actual explosions, at least not in the foreground.

I must have finished this the first time around, because I kept recognising tiny bits of text (mostly atmosphere) throughout, but I’d forgotten most of the plot so I could read it as an entirely new book. Not a very good book, I thought, — and lots of people seem to agree with me (on a forum that’s disappeared, grr) — but enjoyable, especially for the outrageous conspiracy stuff. I don’t usually read spy stories at all, not even if they are by Agatha Christie, so they may all be like that for all I know. Perhaps I should read some Dan Brown for comparison!

My biggest gripe is that about 80% of the book moves at a normal pace, makes sense, hangs together– then suddenly a HUGE PLOT POINT that’s only been hinted at very subtly at the beginning takes over and the ending is only about that, a villain turns up who isn’t the obvious antagonist (as evil as they come, and powerful as well) who we’ve seen earlier, and it ends with a bang. Literally. All we’ve got after that is an epilogue. I’ve read enough Diana Wynne Jones to be used to sudden endings, but those usually consist of all the threads coming together in convoluted ways and making an unexpected but completely plausible final chord. Passenger to Frankfurt ends implausibly and makes me doubt Agatha Christie’s clarity of mind in her old age (it was published to celebrate her 80th birthday).

But there are some nice people in it, especially the protagonist Stafford Nye, and his Aunt Matilda, and the woman whose real name is still a mystery to me– she calls herself the Countess Renata Zerkowski (and seems to be an actual countess, though perhaps not by that name) and borrows a Greek relative’s name, but is known as Mary Ann when she’s at home, or at work, or whatever. I remember now, from my first reading, that I thought at the time that “Mary Ann” wasn’t just a female spy, but the female spy.

And it does make me want to reread The Prisoner of Zenda.