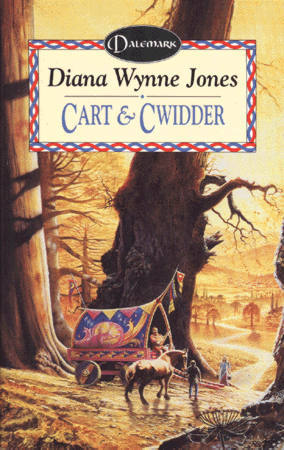 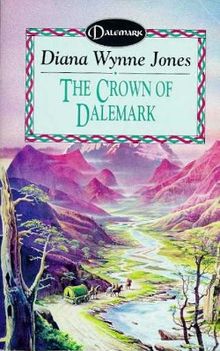 At least there are some real sites describing and discussing the books! Perhaps because Diana Wynne Jones has a substantial fan following. I was about to say “a large fan following” but as I don’t know other authors’ fanbases I have no way to estimate whether or not it’s large.

The Spellcoats and Cart and Cwidder, in no particular order, may have been the first Diana Wynne Jones I read. I bought them for one guilder each in the remainders shop when I was in my late preteens or early teens, not an age when I thought “wow, I need to read more by this author”, it was rather “I need to read more like this book”. I did get Eight Days of Luke from the library around that time but I don’t know whether I even realised it was by the same person. All of these were in Dutch translation, and I later found out that the Dutch translation of The Spellcoats –and perhaps some of the others; I hesitate to borrow the ones Secunda has– is excruciatingly bad, even leaving out whole parts that the translator apparently couldn’t make sense of. Also, the translator thought she had to render names into something her audience would understand, making ‘Kialan’ into ‘Kilian’ –pointless but harmless– and ‘Moril’ into ‘Merijn’ –severing the connection with Tanamoril, so with the mythology. (Post about localising fiction put into mental processing machine. Will come out when ready.)

When I got all the books in the Mandarin (Macmillan) edition I thought for a long time that The Spellcoats and Cart and Cwidder were “the real Dalemark books” and the other ones “political stuff I should also read for completeness’ sake”. On this rereading, however, I found that Drowned Ammet has awesome gods in it! and nice secondary characters! and convincing nasty villains! and well-rounded morally ambiguous people! In fact all the things I appreciate a book for. Also, it’s got much more plot than I remembered; all I really remembered was the beginning with Mitt as a child, and an endless boring sea voyage with Hildy and Ynen. (Well, there is quite a long sea voyage, but it’s not all in one piece, nor is it endless or boring.) Similarly, The Crown of Dalemark wasn’t “obligatory pulling-it-all-together with gratuitous modern-day infringement” but a good story in itself with a neat resolution, that makes me shout “More! MORE!” — I’d happily read more about modern Dalemark, with all the myth and history running through it the way it does through the modern-day parts of The Crown.

Those are the very best books: that make you want more.