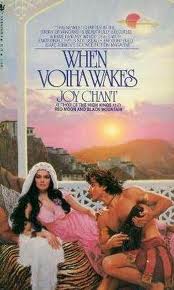 I first read this when it came out, in 1983, when I was young and foolish impressionable. Also, I had little use for men at the time, making the female-dominated society in the book seem natural and desirable. In short (the review, on the title link, has much more information): in this society women do government and politics, trade, religion and farming, while all men are craftsmen unless they turn out so incompetent that they have to become labourers. Women live in houses with their children, while men live together in lodges. It’s said that men don’t know how children are made, but I disbelieve. The society is very rigid: innovation is too upsetting.

Then one of the ruling class of women falls in love — not so upsetting in itself, but the man she falls in love with is a musician, and in this part of the country music is practically unknown. It’s hard to imagine people who don’t have music beyond drums and rattles and occasional children’s or work songs, but it does make sense: there’s very little recreation in the setting, everything that’s done is utilitarian. Music doesn’t make anything so it’s not a craft, and it has no practical application so it’s not work. Work –and not work as such but assigned to people in the precise patterns given by the goddess Rehera– is all-important. Leaving one’s work, or wanting to do something outside the ordained role, causes more of a scandal than leaving one’s family and friends.

I remember the book as dreamlike, exotic and immersive, but this time I found it much harder to read because it’s really an odd patchwork of exposition (and even infodump), history, and narrative. Not layered or inclued, but in patches that I could colour with different markers if I had a spare copy. It’s clearly set in the past from the narrator’s (who isn’t the protagonist) point of view, it’s full of “In those days…”, and the history goes further back, and the mythology further still. This makes the real-time story jarring at times, as if The Silmarillion had random bits of The Hobbit in it.

Religion is far from invisible in this book, at least! At least three goddesses and one god are in evidence, and it’s also fun to match the goddesses and the god and the occasional hero/saint/demigod to the deities and mythological figures from Red Moon and Black Mountain. I don’t think I like many of the characters: really only the protagonist’s four-year-old daughter, and the caustic old priestess, and the master musician at the end. I can’t put my finger on why I don’t like the protagonist; it may be just that she’s so right about everything, stuck in the pattern, told off by family, friends and neighbours when she goes only this much out of line. Or perhaps it’s because most characters in the book exist to make a point, and the protagonist is an expression of the author’s agenda rather than a person with her own agenda and her own problems.