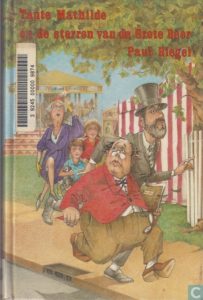 I’ve looked for this sequel to De brieven van de generaal ever since Secunda had it from the library about ten years ago — first for her because she had it on birthday and St. Nicholas wishlists a couple of times, then, when she grew out of wanting it, for myself.

Now I had almost thirty euros’ worth of gift tokens from a web bookshop, and someone was offering it second-hand at a normal book price (that is, not a collectors’ price; about ten euros). So I ordered it, along with English Bread and Yeast Cookery which hasn’t arrived yet.

I don’t know if I actually read it the first time or just browsed it when the library copy was lying around in the house, because I vaguely remembered some scenes but not any of the plot. That might be because the plot is singularly unmemorable: it’s one big chase that turns around in the end when the prey has reason to hunt the hunters. This, in Paul Biegel’s hands, might be a delightful romp but instead it’s one episode after another of more-of-the-same. My other half thinks the writer may have been distracted or going through a bad time when he wrote it.

I read on the book’s Wikipedia page that Paul Biegel read it on radio as a series; this may be a cause of the one-thing-after-another plot, somewhat like some of our soap-opera roleplaying campaigns: fun to play but wouldn’t work so well as a book.