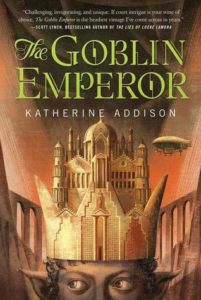 If I’d realised –I almost wrote “if I’d known” but I did know, sort of– that Katherine Addison was Sarah Monette I’d never have picked up this book, because Sarah Monette under that name mostly writes much darker than I like. And I’d have been so wrong.

The Goblin Emperor is the opposite of dark. It’s a profoundly optimistic book. Most of it is due to the relentless optimism of the protagonist– he stubbornly refuses to succumb to all the pressure put on him to give up, to give in, to live his life by the rules set down by (mostly) his late father rather than to do what he knows is good even if that gets him into trouble.

I love it for that, and for the tentatively happy ending: an ending with a strong potential to be happy because the people concerned both want it that way, no magic involved.

There is pleasantly understated magic. There is strong explicit religion. There is politics, more than I thought I’d like in a book I read for enjoyment but it’s all functional and the protagonist is as baffled as the reader, or even more so. Oh, and there are names which would be totally over the top if they weren’t so consistent. Though I can’t resist reading “Untheleneise Court” as the original name of what we, humans, call “Unseelie” because we can’t handle all the syllables.

The people in the book are elves and goblins (there seem to be no humans in this universe) and it was a while until I realised that elves are really white, like a sheet of paper, and goblins are really black, like a lump of coal. I could attach all kinds of this-world political significance to it. but I don’t want to do that — other people will, if they must. It was disconcerting to discover that Maia, the protagonist, has slate-grey skin and not, as I thought at first, medium brown. They do have red blood, though, both elves and goblins; and elves blush pink. I still don’t really see the mechanics.

One review from the list I’m linking below says that they’re elves and goblins “for no reason”, but there’s a very good reason: so they can USE THEIR EARS EXPRESSIVELY. Want.

This is one of my top four books that I read in the first half of 2015 (I admit that most of them were released in 2014, but I usually don’t snap up new books immediately unless they’re by one of a very small group of writers). The others are The Mystic Marriage by Heather Rose Jones, The Invisible Library by Genevieve Cogman and The King’s Deryni by Katherine Kurtz. The latter two still deserve a blog post. The King’s Deryni is hard to reread: I have a hardcover with tiny greyish type because I refuse to buy e-books with DRM.

Other people’s reviews of The Goblin Emperor, some of which I used to whet my opinion:
Liz Bourke at Tor.com: For some days after I read The Goblin Emperor (and I read it three times straight through in three days), I had to sit on the urge to open any discussion of this novel with CAPSLOCK EXCLAMATIONS OF ENTHUSIASM, continue the discussion with more such exclamations, and conclude with CAPSLOCK JOY.
Pornokitsch: The Empire isn’t an entirely happy place, the various nobles are grumpy, his Chancellor is playing politics, his grandfather – the king of the Goblins – is suddenly paying attention and, oh – his dad was assassinated. Maia’s very existence, much less his political presence, is extremely inconvenient to everyone.
Neth Space: A fantasy book that largely lacks violence, and is the better for it.
Fantasy Book Critic: She has three different levels of diction depending on formality: I am one of those nit-picky readers who gets irritated by misuse of “thee”s and “thou”s, but she nails it.
Bibliophibian 2014: There are educated women, women who pursue their skills and interests, women who are not afraid to defend their rights, their children, and in Maia’s fiancée’s case, her husband!
Bibliophibian 2015: While it’s a rich world, it goes much more for immersion than for infodumping. And if you begin it confused, well, so does Maia; he’s been kept away from most of this society for most of his life, so he’s in the same boat.
Come Hither Books: In a genre that’s grown very dark, it’s a reminder of the sense of wonder and optimism that’s missing from so many recent works.
Dear Author: If a reader is looking for intense action, sorcery or swordfights, he or she should look elsewhere.
Staffer’s Book Review: How often are we treated to a protagonist who’s actually just a good person?
Infinite Free Time: Ignore all of these things, and if you start reading the book and they get on your nerves, keep reading, because somehow this book, which by rights ought to be unreadable crap, is fantastic, and I promise it will grow on you and then suddenly the book will be over and you will be sad about it.
The Midnight Garden: Steampunk, feminist elves (and goblin) for the win!
Blue Author Is About To Write: The book understandably elides the toilet habits of the emperor, but the refrain about the emperor having no privacy and the bodyguards’ reaction to the few times he requests it makes it clear: they are there all the time.
The Book Smugglers: (Ana) And to be honest, inasmuch as I loved all of the quiet diplomacy, my heart went pitter-patter when Maia’s fiancée Ceredin was all fierce and protective and ready to gut his enemies with her sword, which fills my heart with hope that theirs could be an awesome marriage. What can I say? I am a romantic. (Thea)… the impossible bridge that Maia builds to define his reign as Emperor Edrehasivar VII is the perfect metaphor for The Goblin Emperor as a novel: a seemingly impossible feat that succeeds because of its ingenuity and optimism.
Strange Horizons: Maia doesn’t angst about whether he’s “really” elvish or goblin, or fret about what it means to be both; neither does he have any special powers or crippling weaknesses as a result of his heritage.
io8: As the story follows Maia’s journey into self-assurance, this complexity often takes the place of a plot. Which, honestly, is not much of a loss.