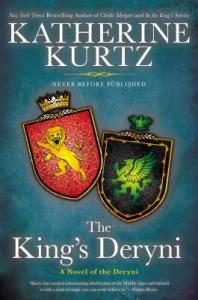 I already had this in hardback, from the moment it was out (late 2014) but unfortunately it has such small type in a light font, in such huge line lengths, that my middle-aged eyes gave up. I thought I’d finished it regardless but the last 20% or so was a complete surprise when I’d finally acquired an epub version.

Perhaps I gave up even earlier and I just don’t remember what I did and didn’t read, because the first 80% (or even more) of the book is completely unsurprising. Bill Capossere of Fantasy Literature nails it. Children grow up, little boys become pages, pages become squires, squires are knighted, people get married, babies are born, people die, battles are fought, kings come into their magical inheritance… oh wait. Yes, that is surprising, and I’d have liked to see more of it. As it is, most of the psychic training of young Alaric Morgan happens when he’s in a trance. That is the way his mentor’s religious-knights order trains its novices, as the mentor tells him. Yes, that’s as may be, but we readers would like to be in on it! All we get now is “you’ll know that when you need it”.

I have very high tolerance for low-plot slice-of-life writing, but even I was “what, it’s Twelfth Night again?” after a few iterations. And much like In the King’s Service and Childe Morgan, when something does happen it’s likely to be the killing-off of a beloved character. That may continue in the fifteen-year-gap between The King’s Deryni and Deryni Rising, or the adult Alaric Morgan from the latter wouldn’t be an almost friendless man with hardly any family! The King’s Deryni ends with him having three half-sisters, each with a husband and children, and many friends, who he’s in intensive contact with.

Yes, I know that Deryni Rising was the first Deryni novel Katherine Kurtz wrote, when she didn’t know about all those people yet and wrote only the ones pertinent to that story. All writers know that’s how it happens. I’ll call it “prequelitis”, and if that wasn’t a word, now it is. But my fanfic brain thinks up several scenarios to get rid of all those friends and relatives. (No, I won’t go there; I’d rather think they’re all living happy lives and just aren’t needed for the plot of Deryni Rising and its sequels.)

The pet peeves from my earlier post remain: however much it’s stressed that good people use their powers for good and only evil people for evil, much of what Deryni do with their powers is coercion. As I said in that earlier post, that’s what my bad guys do. Setting “controls”, altering people’s memory — urgh. Also, the Camberian Council is much more in the spotlight than in other books, masterminding people’s lives.

Alaric Morgan, then. I like him a lot, but isn’t he far too competent and precocious? At four he seems seven, at seven an adolescent, at fourteen an adult. Granted, it’s alternate-world historical fantasy, you can argue that children grow up faster than we’re used to, but that doesn’t excuse all of it. You need some experience to be an adult. I somewhat miss the almost-adult brittleness of a fourteen-year-old[1] when he leads the magical ritual to confirm King Brion’s Haldane powers. (But that magical ritual is impressive. Too bad that the king’s soldiers arrive just too early and distrust him because of it.)

I’ll now go on to reread Deryni Rising[2] and try to figure out if Alaric Morgan is different in the light of what I now know about him.

[1] Like my eldest, fourteen and a half at the time, who was on the phone for a whole afternoon organizing a class party after the original band had cancelled and the original venue with it.
[2] After I’ve finished reading and reviewing a friend’s book because I promised to do that.