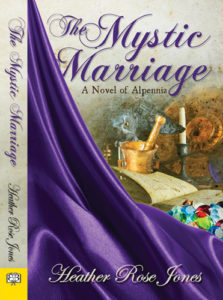 When I read Daughter of Mystery last year, I first devoured it in big gulps to come back and read it with more attention the second time. This time I had the privilege of beta-reading the book so I’d spent all the initial squee already. That didn’t make it a less joyful experience, quite the contrary because I knew what to expect and could savour it all the better. Rereading something I like usually makes it better for me anyway; people who know me will know that I don’t care for surprises and I don’t mind spoilers.

When beta-reading the first couple of chapters I sent email to Heather saying “Eek, I’m rooting for the antagonist!” but the one I was rooting for, Antuniet, is very much a protagonist here. She’s an awkward kind of person, not immediately likeable, but in the course of the book I did grow to appreciate her. I especially liked it when she was actually doing alchemy: people may advise authors to leave out the details of their characters’ work because readers don’t want to read it, but this reader does. I don’t know enough about actual alchemy to see if the facts are correct (though I suppose they are, knowing the author’s habit of research), but the atmosphere is excellent.

Barbara and Margerit from Daughter of Mystery chain the books together nicely, and it’s good to see how they’ve solidified and grounded their relationship. It’s a welcome counterweight to Jeanne’s desultoriness and Antuniet’s insecurity. Jeanne and Antuniet, too, eventually stabilise each other: I think that’s the only real romance component of the book. Good, because I’m still not a romance reader. Rather than straight-up romance or fantasy, The Mystic Marriage is a drama of manners with romance and fantasy in it.

It’s a deep novel, full of intricate relationships and convoluted plots. What I like most about it is perhaps the way women make a world for themselves inside and around the male-dominated and patriarchal world of nineteenth-century Central Europe. Oh, men are useful enough: for instance, Margerit takes her uncle-by-marriage along to a meeting with the young Baron Razik so as not to be scandalised and “she couldn’t deny how much his presence smoothed her path”. (This makes me suddenly wonder how it would have been if Alpennia’s ruler had been a prince: Princess Annek fits seamlessly into the women’s world, while her son and his friend are a foreign element in the alchemy workshop.)

I love Anna: her innocence, her common sense, her matter-of-fact Jewishness. I love to hate Sain-Mazzi. I heartily dislike Kreiser. Tionez annoys me, but I know from the source that she’s meant to annoy.

I can’t wait to read Mother of Souls, or indeed anything else set in Alpennia.