We wanted to go by train all the way, and already had the tickets! Then SNCF decided to strike two out of every five days, and one of those days was the first day that our Interrail ticket was valid and because it was a special bargain price we couldn’t change it. Travelling later, skipping all of Barcelona except one night in transit and arriving at our apartment in Sevilla a day late was no option, so we went to Barcelona a day earlier, by plane. The difference between a Thursday and a Friday flight paid for the extra night at the hotel, and the refund for the Schiphol-Paris and Paris-Barcelona parts of the journey that we weren’t using almost paid for the flight! But I still want to send the bill for the plane ticket to SNCF because, confound it, it’s completely their fault that we had an uncomfortable first lap of the journey.

Spouse doesn’t like flying at all, and I hate security theatre. Though I’d taken care to dress conservatively, they had to pat me down because “my skirt swished around my legs” and found something suspicious in my hand baggage which turned out to be the tiny handbag I’d stuffed in my rucksack because I didn’t want to pay for an extra piece of cabin baggage. It has large copper rings, that was probably why.

Then we had mediocre food after security (when I order a chicken burger, I expect a burger, not a piece of a grilled bird which might have been an old laying hen or a turkey, put on a soft soggy bun with icky sauce and limp lettuce!) and our flight was delayed 25 minutes until we could board and another 10 on the runway, landing us in the middle of a queue of five planes at one point. It was a good idea to pay extra for front-row seats so we could at least put our legs somewhere, but it was the narrowest plane seat ever so we arrived stiff and grumpy. Fortunately the taxi was fast and less expensive than we’d been led to expect, and the people at the hotel wonderfully nice and helpful.

We walked through the neighbourhood for a bit and sat down at a small cafe for a beer. 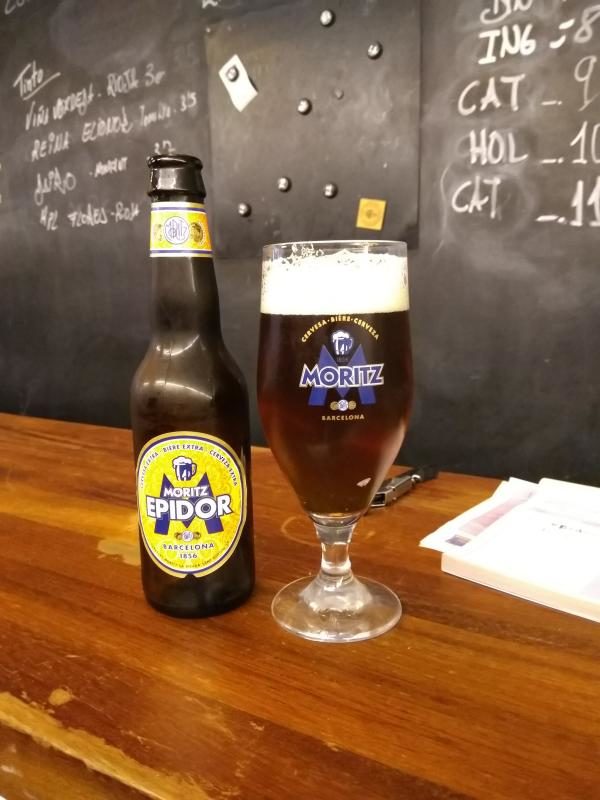 Moritz Epidor! Spouse had the ordinary Moritz and that was already pleasantly bitter, but this had more depth and definition. (We’ve since found the Moritz shop, but didn’t go in because we were on our way somewhere else; if we find it again we might buy some to take home.) Also homemade croquettes, four different ones, chestnut and spinach and cheese and (quite tasty) mystery meat, and anchovies, and complimentary fried potatoes.

And in the evening we went to eat at Gat Blau. The hotel receptionist could make the reservation, which was a good thing, because she did it in rapid-fire Catalan that we caught about one word in fifty of. Catalan is a great language, I like it a lot better than Castilian because it has more sharp edges, but it’s hard to understand and it keeps making me try to speak Galician, Portuguese or even Italian instead (I said “obrigada” to someone who held a door open for me, and the only thing I could think of to say to the priest after Mass was “sono ortodossa” — good thing I didn’t get to speak to him).

For a starter, Spouse had artichokes on artichoke puree with seaweed butter and crispy seaweed foam. “Completely uncompromising,” he said, “if you don’t love artichokes you won’t like this!” I’d considered this as well but I fell for the candied leek topped with Gamoneo cheese (which is what the Catalans use for Parmesan, I think, dry and salty and full of cheesy goodness). I tasted an artichoke (mmm!) but Spouse doesn’t eat leeks so I couldn’t reciprocate, but it was LEEK HEAVEN and I’ll certainly try to reconstruct it at home.

Then we had red mullet with assorted vegetables (him) and chicken dumplings on creamed parsnip (me). OH WOW. That made up for the ambiguous bird parts at Schiphol. This came from what had been a well-fed farmyard chicken in life, done right by in the kitchen, stuffed lovingly into four large dumplings. Exactly the right number: I’d have been satisfied with three, five would have been too much, now it was “oh yes, I’ll eat this last little bit as well”. And the creamed parsnip complemented it perfectly. The fish, too, was perfect, with a sauce probably made of a broth from all the parts of the fish that weren’t on the plate, reduced to their essence.

No fries or steamed vegetables like you get in Dutch restaurants — but we’d both had an all-vegetable starter and that definitely made up for it.

Wine from the “rosado profundo” category of the wine list (the categories are probably their own invention, but worked better for us than just having the wines listed by region and/or price). 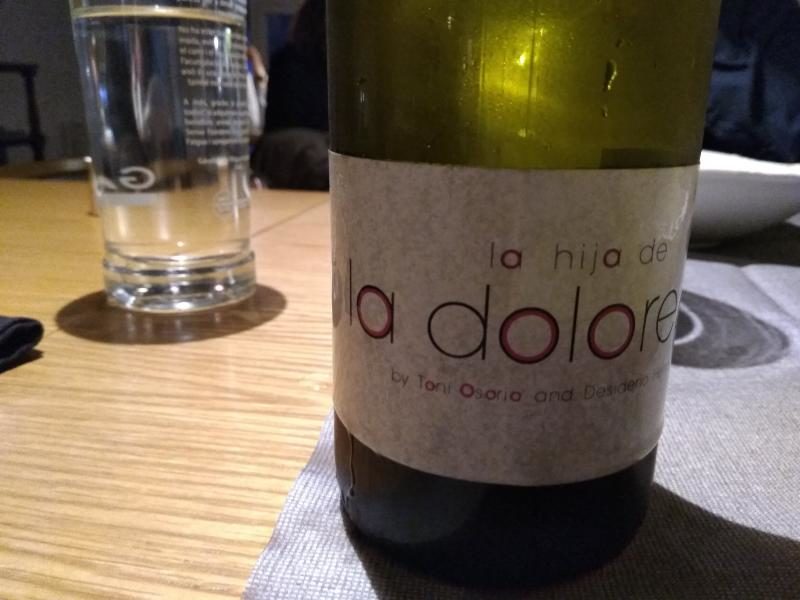 La Hija de la Dolores. Got interested because of the name first, then because of the description, and we thought it would fit with everything we might consider eating. And it did! Especially with the artichokes it was amazing. It was quite dark pink, almost a light red, and it reminded us of the pale-red wine we had in Greece once and could never find again, not even at the same restaurant. It had the bitter [1] high note of a good Albariño. I can’t find any reference to it! Searching only gives it as the name of a play, which it may have been called after.

[1] Which sparked a nice discussion about what things can be called “bitter”, leading us to conclude that it’s about the same thing as deciding what colour is “blue” — that is, different people have different perception. I think artichokes are bitter, and asparagus for that matter, but for Spouse both lie outside that category. I may be a supertaster, but I’ve always heard that supertasters don’t like bitter and I do! (Not everything, but bitter vegetables, and most beer, and wines with a bitter note, sure)

Then dessert! Apparently it’s quite normal for people to share a dessert at Gat Blau, because we ordered only one dessert and got a spoon each, and across the aisle a mother and daughter were sharing a plate of hazelnut mousse and caramel ice cream. But this dessert was for me, and it was also amazing. Sheep cheese, apple, fennel, almond crisp, with smoked sheep yogurt (how?!). The only things that made it sweet at all were the apple and the moderate amount of sugar in the almond crisp. I had a glass of sweet wine with it that the waiter said was the most interesting on the list (after I’d said I liked PX and asked about the things I didn’t know): made of nothing but grapes but it absolutely tasted like cherries. And Spouse had a glass of Gewürztraminer “in the Hungarian way” that tried with some success to be Tokay: it smelt very interesting but tasted like ordinary pleasant sweet wine.

After this, coffee would have been an anticlimax, so we went back to the hotel and bought a bottle of brandy at the all-night store on the way. We already had some ham from the covered market — not the covered market we really wanted to see, but a different one; and we didn’t taste the ham until the next day, when it turned out to be vile and we threw it out.

The bed was okay but I slept somewhat haphazardly: still stiff from the plane and an unaccustomed amount of walking, and alternately too warm (threw the cover off) and too cold (crawled under the cover again). We can remedy that last by sleeping without the blanket or the coverlet or both, but the unaccustomed walking isn’t any different today.

The Salesian church — nearest church, and we’ll be on a train on Sunday — had a Catalan mass at 8 am. So that’s where we went! 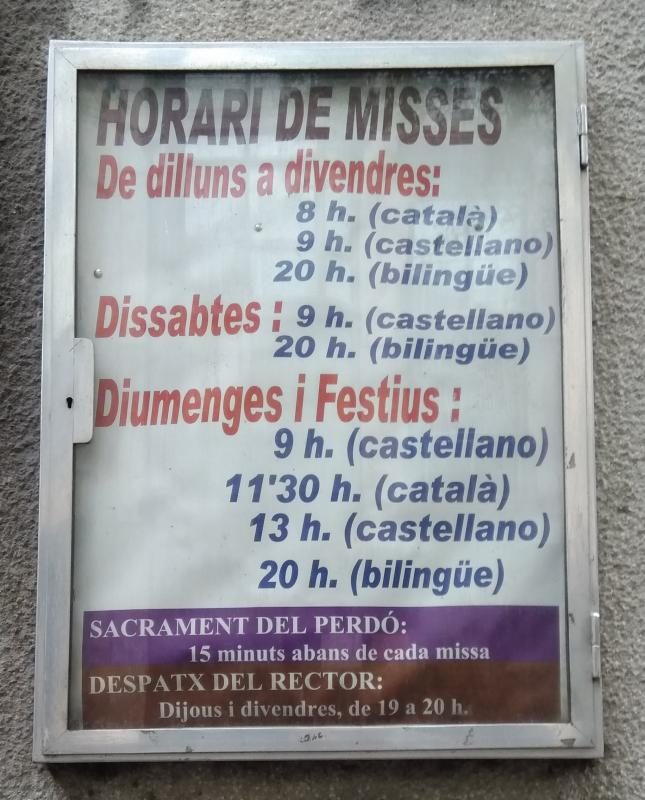 A quiet, unassuming, matter-of-fact priest who still had complete reverence. But we could only follow the Mass because we knew what to expect: Catalan is really beyond us at the moment. Glad that we went, anyway. Then we had breakfast at Café Mono (monkey), great coffee and nice bread rolls so we might go there again tomorrow. Into the city for more adventure: St. Anthony’s covered market, which is greatly under reconstruction, but we stumbled on its temporary barracks-like location yesterday. Fish, glorious fish! And shellfish! And meat and sausages! And vegetables! And fruit! We couldn’t resist the temptation to buy some strawberries *eats a strawberry*: ripe, not really sweet but they absolutely taste like strawberries, not like nothing at all as strawberries do in the Netherlands so early in the season. We’re looking forward to having a kitchen in Seville, and hoping Seville has a good market too, or else it’s likely that we’ll find a big supermarket with a nice selection of meat and fish and produce.

The under-construction market, meanwhile, intrigued me: how can something that’s clearly a temple of Mizran look so much like a temple of Anshen? 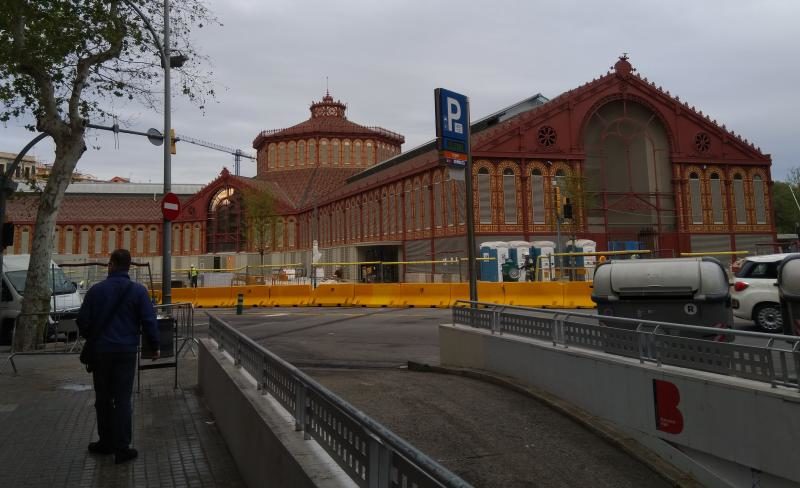 (Spouse’s back on the left.) Or a nineteenth-century railway station, come to think of it. Not that Barcelona has any lack of eight-sided towers: the cathedral alone has at least three.

We’d seen, through a building with some Roman remains, a patio with tables and chairs were people were drinking coffee, and when we’d found it by turning a couple of corners ordered some coffee. The coffee was excellent! And very cheap: it turned out to be the local seniors’ social club. Well, we’re almost senior enough. (I said at the museum ticket desk: “I’m 60 years old! Do I get a discount?” But no, it was from 65.)

Then to the historical museum. Which turned out to have a lower floor set in the year -12, namely part of the Roman town of Barcino which was excavated and made accessible. 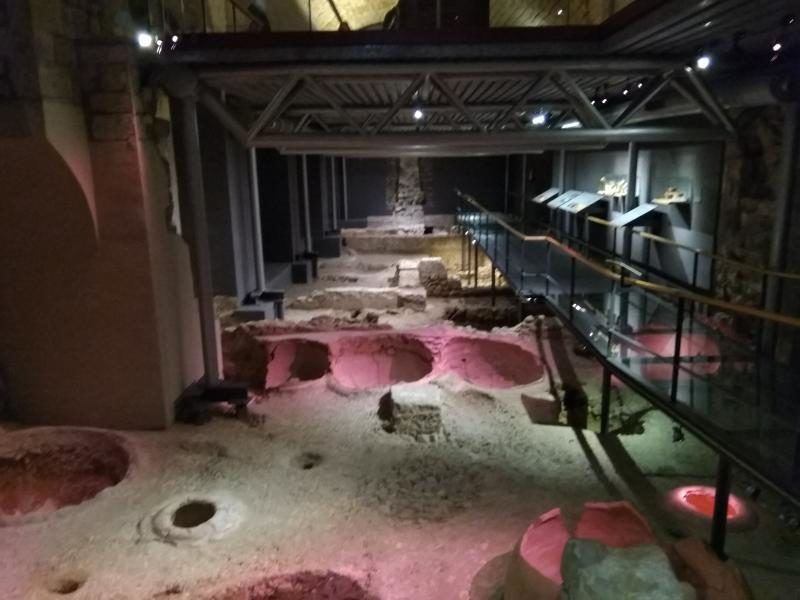 (That red is 2000-year-old wine residue! This is the wine-making workshop.)

This filled up our brains so much that we only glossed over the medieval section of the museum and went to have lunch at the Bishop’s Cafe: the set menu was cheap and edible (aubergine filled with minced meat and vegetables, like the bare essence of moussaka, followed by fried fish balls and a decent salad) and the flan caramel was as good as the one I had in Coimbra (Portugal).

We’d planned to have just bread and cheese and sausage in our room, but were so exhausted [circumstances redacted; will elaborate when resolved because it involves several good people being good and I want to credit and remember them] that we went to eat in the hotel’s restaurant. Where we inadvertently completely confused the waiter: Spouse ordered a steak and red wine, I ordered a hamburger and draft beer. First he registered only the drinks and wondered if we wanted anything to eat, then when we’d ordered food he’d forgotten what we wanted to drink. After a while he appeared with wine and Coca-Cola, which I promptly said I hadn’t ordered. Finally I did get beer, but he put it in front of Spouse even though (1) I had ordered the beer, twice over even! and (2) he already had a glass of wine in front of him. Apparently he was convinced that beer is a man’s drink. We also got food, and the hamburger was EXCELLENT, as good as Spouse makes, the meat juicy and only barely done, with onions and real cheese. (The steak was also okay, I hear; and there were fried green peppers with it.)

We didn’t want any dessert, only a glass of white wine; and the waiter brought us cava and truffles “as a present” because we’d told him about being exhausted (and perhaps also because he’d fumbled with the drinks earlier).