Sleeping under only a sheet did the trick. We didn’t need to get up so early as yesterday anyway, because on Saturday there’s no Catalan service at 8, only a Castilian service at 9. When we were walking to the church we passed a cafe and I said “if Café Mono is closed we can go here after Mass!” And yes, Café Mono was closed. Things tend to be closed on awkward days all the time.

The Castilian priest was old and not nearly as quiet and unassuming as the Catalan one; also a very different crowd of people (mostly women ten or more years older than me, with a sprinkling of old men). I could understand about twice as much as of the Catalan service: that is, slightly less than half, more from the parts that I know by heart anyway, and almost all of the first reading because that was a bit that I’ve read myself several times, the beginning of Acts 6 about appointing Stephen, Philip etcetera to do the practical work so the Apostles could concentrate on prayer and ministry. (Women readers of the world, unite!) And there was singing. I picked up the Alleluia and the Gloria right away, and the thing that was sung at the end I knew, in Latin but that made hardly any difference. Both the priest and the reader-cum-acolyte had low singing voices so it was all in my range.

We had breakfast at the other cafe, after greeting several women from the church in the street when we recognised each other. The coffee tasted okay but it did something funny to my stomach and I didn’t want another cup right then, so we went to the station to handle a transport problem [also redacted, belongs to the thing I’ll elaborate on when fully resolved]. I had strawberry lemonade at the station cafe, which settled me (or it was the relief at having handled the problem, but anyway it was nice).

While we were sorting out metro lines — I wanted to find out how easy it is to go to the station by metro tomorrow; probably very easy — we decided to take a metro and the funicular and the cable car (the funicular goes on the same metro ticket, the cable car is somewhat expensive but great fun) up to Montjuïc to the castle. 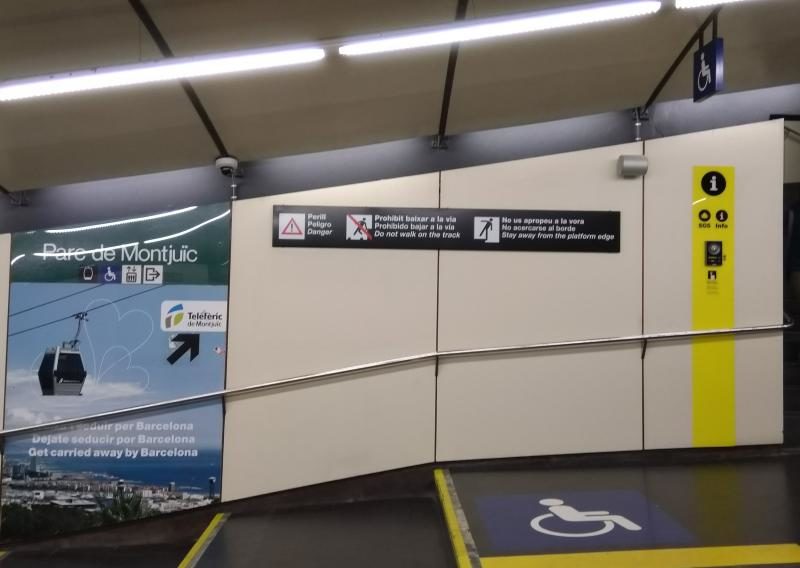 The funicular itself looks like a sort of slopy metro when you get in, but it rights itself once it’s underway — then it’s the track that slopes. The Catalan parts of the large sign read to me as “Kissing on the road is forbidden” and “Don’t appropriate something and eat it” but they really do say what the English does.

It was raining when we arrived at the castle. It rained incessantly until — well, until the time I’m writing this, about half past three. The first person outside the cable car station was an umbrella seller but we brandished the ones we had. Not really weather to climb a flight of stairs to the battlements, and the tour that goes to the really medieval part of the castle (guard rooms, dungeons and cisterns) was at 11 which it had already been, and 4 which was later than we wanted to wait for. Ah well. Really impressive pieces of artillery. View over the foggy Mediterranean where several big container ships lay anchored which a smaller container ship moved out between, and a HUGE container ship came in around. Gulls hanging against the wind and crying “Eow” every so often (like “meow” but with only vowels). And rain.

Inside the castle it was at least dry, but when we wanted something to eat it turned out that the rooms marked on the plan with a fork and spoon were closed, and the room that had a steaming coffee-cup on the sign had only vending machines. There was a rather interesting small exhibition of Barcelona under the Nazis, with a young Dutchman mansplaining WWII and the trial of Nuremberg to his girlfriend; I’m glad most people take us for English before we open our mouths, and sometimes even after we do. The other (part of the, I suppose) exhibition was about the Catalan president shot in 1940 for being the president, but we looked at each other and decided we didn’t need another two rooms of pictures and text about a bit of history we weren’t really planning on being informed about.

And rain. Back on the cable car, back on the funicular, and then we were so hungry that we decided to go and find somewhere to eat right there outside the metro station. Where we ended up looked so dingy that we wondered whether to stay, but we did, and got a “medium” beer that turned out to be half a liter, and some surprisingly good tapas, and decent coffee. And it was still raining.

What we wanted was to find a taxi and make it take us to the Museum of Catalan Art because taxis are dirt cheap here (only slightly more than two metro tickets) and we didn’t feel like trudging up another hill in the rain, but first it was quite a walk to find a working ATM (the fourth, I think, yielded money instead of “out of order” messages) and then we saw lots and lots of taxis, all occupied. There were free taxis on the other side of the road so we crossed, but none would stop for us until we’d walked even more, getting wetter and wetter. By that time even my socks were wet: water had crept into my shoe from the soaked hem of my skirt. All we wanted now was to go back to the hotel, change into something dry and spend the afternoon in the lobby with the laptop, going back into town in the evening to have dinner with friends.

Then we saw a place where people were getting out of taxis! And, unfortunately before we’d reached it, other people were getting into those taxis. But I stood on the corner and waved at the next free taxi and it stopped and picked us up. Lesson learned and put into practice: when in doubt, pronounce ‘b’ as ‘v’ and vice versa. Especially vice versa! We’re in Hotel Vilamarí and I can now make taxi drivers understand that. 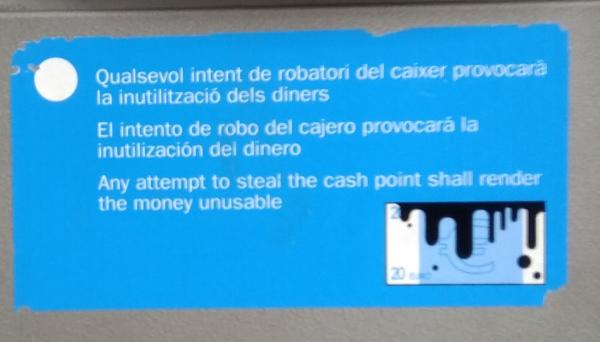 Which shows that “money” is plural in Catalan (and singular in Castilian, and undecided in English). I’d say “rob the cash point”, not “steal the cash point”: it would have been hard if not impossible to make off with the whole thing! Nice false friends too: intent and intento don’t mean “intention” but the actual attempt. And the splendid qualsevol “whatever one wants”.