Second weekend in September, without fail. And our church has been taking part for as long as I can remember (more than twenty years now).

This year, most of the people who tend to volunteer for it couldn’t make it because they were various elsewheres — on a train, at a family gathering, at life drawing class — so I was alone for the first two hours.

I hung up the flag all by myself! 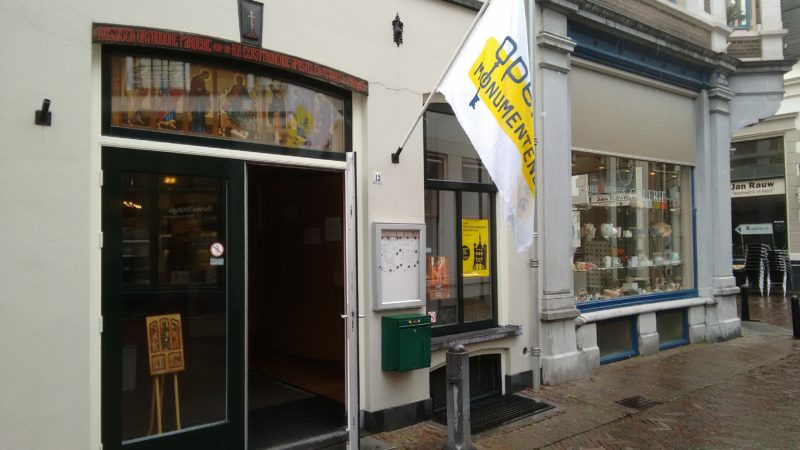 This was scary because the ladder wouldn’t stand straight on the pavement, but I used our own flagpole instead of the church’s heavier one so the flag didn’t unbalance me much.

It was raining when I opened the doors and put the “Church Open” sign out, and for the first half-hour I could even do some writing, but then people started coming, First in dribbles, then in droves. We had 355 visitors in 7 hours, just over 5 every 6 minutes on average. The largest number in the church at the same time was about 20.

Choirmistress came for the Sixth Hour at noon and stayed until the end. Strangely, both times we read one of the hours it seemed to chase people out of the church, just the opposite of what we intended! But perhaps it was because people wanted to talk, to ask questions, and we weren’t available. Or they thought it was a private affair, like the woman who asked if services were public or she needed an appointment.

Most amusing question:”Are those your former leaders?”

Two of them are bishops, and the one on the right is St Basil the Great, so I guess yes?

(But she thought they were actual portraits of our previous priests, like the portraits of professors on the wall of the room in Utrecht University where Tertia got her BA).

The theme of the day seemed to be that people assumed “Russian [Orthodox Church]” rather than “[Russian Orthodox] Church” and were surprised, sometimes even disappointed, to hear that we’re not a quaint ethnic thing or a Russian cultural institution.

Several people counted chairs and thought we must be a very small community, as in “you can seat only eight people”. Some people thought we brought chairs in for services. Some people peered at the staircase to the library and office, looking for the organ. One person tried to convince me that we were wrong to use only the human voice for music because there are so many musical instruments mentioned in the Bible. I think I managed to get it across that the Bible is a library, not a single book, and it’s impossible to follow each and every commandment.

Also, the ubiquitous “Do you still have services here?” with expressions varying from incredulity to pity (in which case there was usually a “some” or “occasionally” included), assuming that we’re a dying breed. Spouse said later that people probably expect that monument = no longer in use. He has a point. Or perhaps the number of icons on the walls makes it look like an exhibition.

No, our services aren’t occasional. They’re very regular, every Sunday, every Saturday except in July and August, the eve of the great feasts, and I’m not even mentioning Holy Week and Easter. (Well, I’ve gone and mentioned it now.) The only Sunday we might skip the service is the Sunday after Christmas, especially if it falls on New Year’s Day. And we don’t have a morning service on Easter Sunday, hopelessly confusing some people, because we’ve already done it in the night.

When talking to some people Choirmistress said “it’s a living building” and I think “Living Buildings” would be a great theme for a monument day, showing that buildings are actually being used either for their original purpose or for another purpose enitirely, like our church that started life as a smithy. I’m not going to suggest that to the organizers, though, because a national lottery sponsors the event. If I had a monument of my own I probably wouldn’t take part because I don’t want to give the impression that I endorse gambling. It was annoying enough that their logo is prominent on the flag, mercifully hidden inside a fold in the picture above.

I floored a mansplainer (who came in with four women, two middle-aged and two young, who looked at me pleadingly) by taking over smoothly in the middle of his (incorrect) explanation. I never said he was wrong, just repeated his discourse but with the actual facts.

At one moment I thought “I keep repeating myself!” but that was because people kept asking the same questions, of course.

There was a vigil in the evening but I didn’t go because I was exhausted. Not only from being on my feet for seven hours, but also from talking to people all the time, lots of different people.

Takeaway for next year: have an “Accessible WC” sign. Two people were very pleased that we had one. We’re not fully accessible — can’t do anything about the acoustics, and don’t have the resources for Braille signs, for instance — but people with wheelchairs or mobility scooters have no trouble getting in.