Repost of a 2008 post on my defunct blog because I want certain people (you know who you are) to be able to read it. 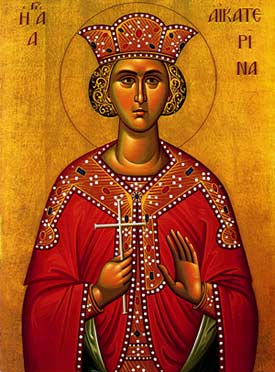 November 25, the feast of St. Katherine of Alexandria, happened to be on a Sunday so I moved the third-Sunday church school (six- and seven-year-olds) one week to accommodate Girl #2, whose name-day it was.

I had the saints’ calendar handy, because rewriting Father Adrian’s story in terms suitable for a seven-year-old had been beyond me; his appropriate but hard words kept slipping in. Also, I wanted to tone the story down a bit because I didn’t know how squeamish my students would be. (I know Girl #1 to be bloodthirsty, so that was no problem; wasn’t sure about the other two.)

Girl #1 starts reading, stumbles over the hard words, gives the book to Girl #2 who does a little better and struggles on to the end of the paragraph, prompted by me when she meets a particularly hard word, like “confiscated”.

Me: “That’s what’s in the history books, it doesn’t say much, does it? Now this is what else happened: There was this noble girl in Alexandria called Katherine, the one you [pointing at Girl #2] have been called after. She was very beautiful [they all giggle; Girl #1 pokes Girl #2 in the side], she liked to study, she’d read a whole library full of books, and she could recite lots of poems from memory.”

“Lots of men came to her house to ask her to marry them, because she was so beautiful and clever, but she didn’t want to marry someone who wasn’t as clever as she was.”

Brief digression about Girl #2’s boyfriend (currently just a friend who is a boy, but she can imagine marrying him if they still like each other when they’re old enough to marry) who isn’t as good at reading as she is, but better at arithmetic, which makes them about equally clever.

Me: “Now in that time, all women got married, you couldn’t very well do anything else, so Katherine did want a husband. [very relieved that that didn’t spawn any questions or digressions!] So her mother sent her to the desert to talk to a very wise man who she knew lived there. This was an old monk. He told Katherine: yes, such a man as you want to marry really exists, he’s the master of everything in the whole world, and not only that, he made the world!”

Me: “Exactly! That’s what the monk said, too. Katherine promptly wanted to know everything the monk knew about God, and when he’d told her everything he knew she asked to be baptised. Once she’d been baptised, she had a vision –that’s like a dream, only while you’re awake– in which Christ came and put an engagement ring on her finger.”

Me: “We’ll come to that yet. –Then the emperor, Maxentius [that was in the saints’ calendar; other sources have Maximinus], who’d promised to destroy the whole church and all Christians, sent fifty wise professors to argue with Katherine, but she said such sensible things that she convinced them all that being a Christian was right, and they were all baptised too.”

Girl #2: “That must have made the emperor angry!”

Me: “Yes, he was so angry that he had all of their heads cut off.”

Girls: <shudder in obvious delight> [one lesson I learnt: there’s no such thing as a squeamish seven-year-old]

Me: “Then the emperor thought he’d try to get at her another way, and he went to see her and promised to send his wife away and marry Katherine.”

Me: “It didn’t work, anyway. Katherine said to him, ‘first, I’m engaged already, and second, you’re too stupid!’ So he seized her and threw her into prison and went to his castle on the other side of the country. While he was away, the empress came with her general to talk to Katherine, and they were so impressed that they both became Christians, and the general’s wife and two hundred soldiers as well.”

Me: “Of the general and his wife and the two hundred soldiers, yes, when he came back. I’m not sure about the empress.”

Girl #1: “And what did he do with Katherine, was she still in prison then?”

Me: “The emperor built a great big wheel with knives attached to it on all sides, and he pushed Katherine at it when it was turning so she’d be cut into pieces.”

Me: “But as soon as the wheel touched her it broke apart and the knives all flew into the audience and several people were wounded.”

Me: “You see, Katherine had prayed to God that she didn’t mind dying for Him, but she didn’t want her body violated. So the emperor gave up, and had her head cut off too, and angels came and carried her body to Mount Sinai so it wouldn’t be damaged any more, and there she was buried.”

Then we discussed that a martyr story necessarily doesn’t have a happy ending for the protagonist, because the point of being a martyr is dying for your faith. If they’d been a little older, I’d probably have talked about different kinds of martyrdom –holding out unto death rather than actively seeking to die– but now we talked mostly about different ways to become holy, that you can be a saint without being a martyr. Finally:

Girl #1, always fond of closure: “But what about her fiancé?”

Girl #3, who had been mostly silent until then: “She went to heaven, silly, they’re together again!”