I’ve been making new templates for reader notes for the church, because we have one singer/reader per Liturgy now and not all singers are experienced readers so we’re including more information. Here’s how the new templates show up in the Open File dialog (and in the Open Template dialog, which is the same dialog but has a different effect: Open File gives a new .odt document from the template, Open Template gives the template itself for editing): 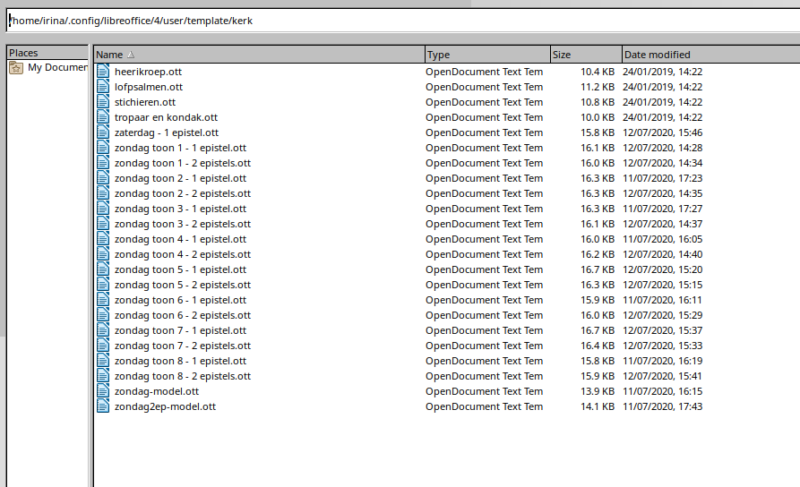 I started on Friday by converting today’s existing reader note because today’s reader needed the extended version. I saved it, printed it (so it would exist even if I screwed up completely), replaced the number of the Sunday and the Epistle text with placeholders, and saved it as “zondag toon 4 – 1 epistel”. Then I stripped all the changeable text and saved it as “zondag-model” to make the other templates from. Not that I did that every time: it proved easier to make each new one from the previous one, replacing the changeable text. I’m keeping the “model” templates for non-Sunday occasions, though.

While making the rest of the templates I made a few foolish mistakes (save the new tone over the previous one so what I’d just saved as 4 got replaced by the new 5, things like that), and LibreOffice has a weird way of saving with version numbers, which might be useful in some contexts but not in my context. I renamed the “1 epistel1” versions in a text terminal because they made the list look messy.

Then I went on to make templates with two Epistle readings, the “2 epistels” versions. While doing that I noticed that the Manage Templates dialog was missing some of the “1 epistel” templates, but I could do ls -l in the text terminal and see that they were all there, so I wasn’t worrying. (Except that at some point I accidentally deleted 7 so I had to make it again. Ah well.) Also, they duly appeared in Open File and Open Template and I could grab them to add what needed to be added and save as a new template.

As such things go, just when I had a good workflow (open document from template so I can’t save it over the original by mistake, change what needs to be changed, save as template) I’d finished all eight tones for Sunday as well as a special template for Saturday.

They were all there (see the list above). But the Manage Templates dialog still looked like this: 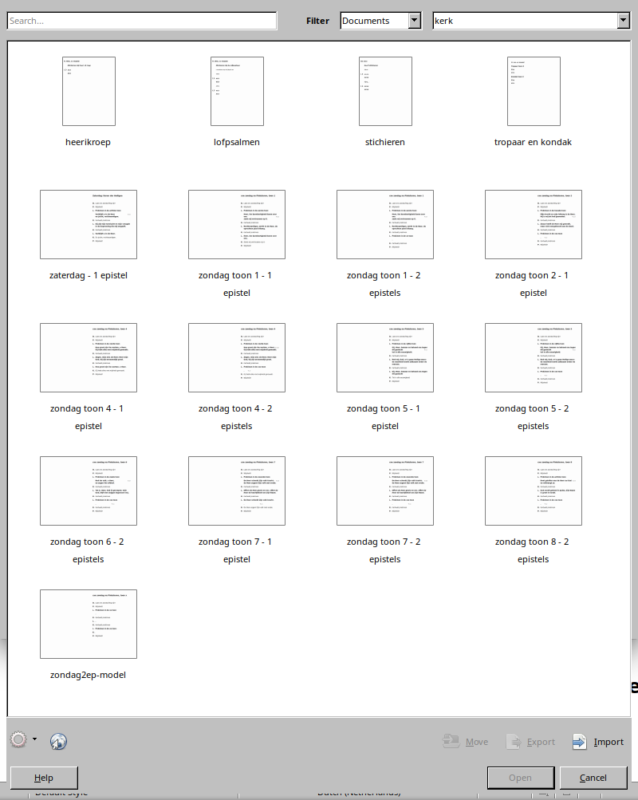 Missing: the one-epistle master template (zondag-model), the two-Epistles instance of 2, all of 3 and the one-Epistle instances of 6 and 8. Of course I don’t remember whether I made all of those one particular way and the ones that do show up a different way, I was making reader note templates, not doing scientific experiments! But I can pick any template from the Open File dialog (though that’s a hassle to navigate to when I start in the reader-notes folder) or from the Open Template dialog as long as I remember to save it as what it ought to be. Before I do anything to it, ideally.