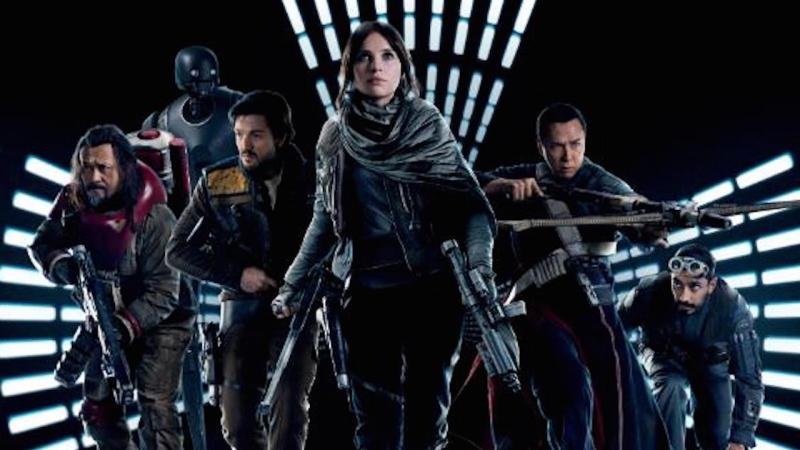 So we went. Hard to find a suitable showing: neither of us can handle 3D with our glasses, let alone the vertigo that it gives me, and we had to go at an impopular time. This was in fact a good thing, because the cinema wasn’t over-full (though the foyer was, with kids waiting for two different holiday movies) and everybody who was there really wanted to see it, no casual evening-out people.

It’s definitely Star Wars. Even though it doesn’t start with the opening crawl it’s clear from the signature grimy run-down military stuff. I know (from fencing events in military sports centres) that this is completely true to type, but it says “Star Wars” to me more than anything else does. Except possibly the destruction of historical buildings, including not only a holy city but also the entire archive of the Empire. Do I hope they had backups for historical reasons, or hope they didn’t for military reasons?

What it did start with was the blue “A long time ago in a galaxy far, far away….” text, and then several short bits that looked like prologue, all labelled with the name of the planet. I should really see it again (but I don’t want to; this amount of death and destruction was quite enough, I don’t think I can handle it twice) to know whether there was one of those naming-the-actors parts that movies have after the prologue. I don’t remember one, but that doesn’t say much because I was immersed in spite of the patchwork of planets.

These are my thinking notes. Read Emily Asher-Perrin’s review (Having a rough battle sequence and character deaths does not make a movie “grown-up,” and grit has never been a guarantee of quality) and Heather Rose Jones’ review (… it slipped over the line into predominantly being a genre that I’m supremely indifferent to) if you’re looking for, well, a review. I agree with both, though there are things in them that I would never think of on my own.

War films aren’t my genre either, and this was absolutely a war film. I don’t mind a fight, I appreciate a good space battle, I rather like explosions, but if you need to blow something up, why must it be a historical holy city full of civilians just to make a point? Only to show that the bad guys are evil, it seems.

It’s a good thing that the band of rogues was led by a woman, but why must she be the only woman? That makes her the token woman again. Fortunately she turned out to be an equal partner, not the figurehead of half a dozen stalwart men. Those stalwart men were all human, though we know (and see, at the council meeting) that the Resistance has a sizeable complement of different species. Different sorts of human, okay, also in the larger group of volunteers that they take along later. Take that, Empire, at least 95% male and 99.9% white! (According to my other half, all the imperial scientists were old white men because that’s what the usual image of a scientist is: an old white man. As if there aren’t any women engineers, or alien engineers for that matter. But the Empire doesn’t seem to have any aliens.)

Talking of the Empire: it’s disconcerting to know, after The Force Awakens, that stormtroopers are human beings in a suit, not a sort of droids. (And we also know from TFA that some of them are black human beings.) I used not to mind that they were mown down like stalks of grain in any fight, but now it added to the already overwhelming body count. (Daughter who hasn’t seen it yet: “I sort of know how it ends but you don’t need to tell me exactly who is going to die.” Me: “You can assume basically everybody.”)

Also disconcerting: ships, and even the Death Star, dropping out of hyperspace just like that. Without even causing turbulence when that happens close enough to a planet to disturb the atmosphere. And I still wonder how lightspeed-capable shuttles can fly in an atmosphere at all, and if the answer is “antigravity” why they have those ridiculous folding wings.

Subtle: Mon Mothma‘s little smile when the Resistance Alliance Rebellion (whatever) decides to go to Scarif after all.

Slightly annoying, though I ended up liking the character a lot: Blind Asian Fighting Monk. Why not, for instance, an Inuit woman with superior fighting skills? Or a hulking blond Viking for that matter — oh wait, we already have Baze Malbus (though Chinese) for that.

Very annoying: yes, we have diversity in the Rebellion; why is Senator Pamlo, the black woman who makes this film pass the Bechdel test by a hair’s breadth (charitably assuming that when she and Jyn discuss the Empire they’re not talking about the actual men that the Empire seems to almost completely consist of), the worst coward in the whole council?