Whenever I’m in Germany I want to eat poppy seed pastry. I love it and we don’t seem to have it here. Last time in Berlin I bought a half-pound bag of poppy seed to bake my own, forgot about it, and found it again when I was looking for something else, as those things go.

I searched for “maanzaadgebak recept” (poppy seed pastry recipe) and the first link I found looked as if it would work: sweet yeast dough filled with crushed poppy seed. Though I usually make a new recipe unchanged to see what it does, this time I started out with reducing the sugar by about 20% because it looked as if it was going to be too sweet for me, though poppy seed can bear a lot of sticky sweetness. 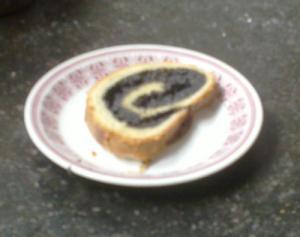 Sift the flour with salt into a large bowl and cut the butter into it. Dissolve the yeast in the milk and add to the bowl, with the sugar and the egg. Knead into a supple dough, then knead some more. Leave to rise for about an hour while you make the filling.

I suppose that if you don’t have fresh yeast you can use 1/3 of a sachet of dry yeast, but I never have that in the house (when I did, for emergencies, it had always lost its potency when I actually had an emergency).

Crush the poppy seed in a mortar (or, conceivably, give it a whirl in a food processor). In the mortar it goes best if you do about 2-3 tbsp at a time. Put it in a saucepan with sugar, honey and milk and bring to the boil. You may think this isn’t possible because it soaks up all the milk immediately, but it boils into a sort of thick blue-black grainy porridge. Turn the heat down and stir until you don’t see any liquid. Take it off the heat, stir in the lemon peel and let it cool a bit. 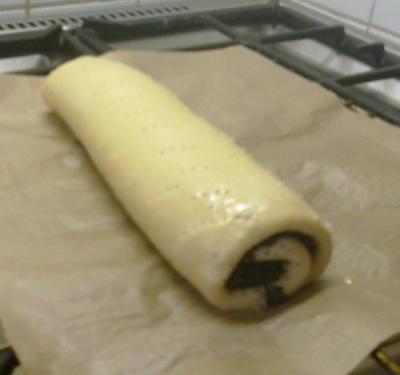 Knead the dough through –it should have risen, but probably not much because of the butter and eggs– and roll it out into a rectangle. It’s easiest to roll it into an approximate circle first and fold the sides to the middle. Turn it over, roll it flat again and fold the corners to the middle. Turn it over again and it will probably behave. Make it about as thick as your little finger, unless you have huge hands.

Spread the filling on the dough (it’s likely to be a thicker layer than the dough itself) and roll up from one of the short sides, very carefully, until you end up with a roll with a seam on the underside. Unavoidably, some of the filling will spill out at the ends. This is already yummy, so you might as
well eat it.

Brush the roll with beaten egg. (The original recipe says “with a beaten egg” but that’s far too much, you can reserve about a tablespoonful from the egg that goes into the dough.) Prick a pattern in the dough with a fork.

Bake for about half an hour, until golden brown. I actually turned down the heat to 175° and covered the pastry with baking parchment after 15 minutes because it was already golden brown, but I know my oven is quite enthusiastic. 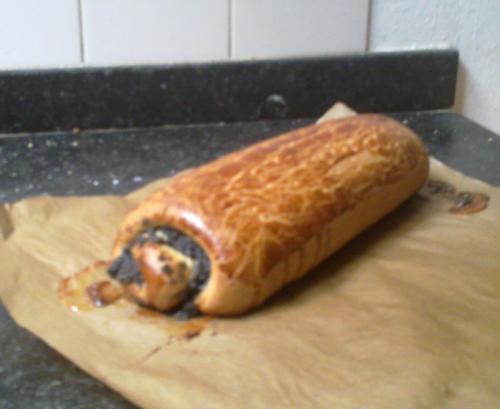 I forgot the lemon peel –didn’t notice until it was in the oven and I wrote the first part of this post– but that doesn’t seem to have hurt it. It’s very falling-apartish, so perhaps next time I’ll use less filling (or more pastry) and put apricot jam in the filling (which was in the ingredient list, but not in the instructions) to see if that will make it stick together more.

Verdict: it’s very tasty but fairly dry, seeds tend to stick to teeth.  Making it sweeter (with the apricot jam) probably wouldn’t help, but perhaps grinding more finely and/or adding some butter to the filling would. I’ll experiment when I have more poppy seed (only 50g left now from the Berlin bag).