When I first started trying my hand at Indian cooking I thought ghee was an esoteric substance, only to be obtained at forbidding cost from specialist shops. And indeed, whenever I found ghee for sale it was expensive and marketed as something really special. But in fact it’s extremely easy and cheap to make, rather like seitan in fact. It doesn’t require special knowledge, experience or equipment.

Ghee is aggressively clarified butter. Normal clarified butter comes into being when you let melted butter solidify so it separates into its components: butter-fat on top and water with milk solids dissolved in it at the bottom, looking milky from the protein and tasting sweetish from the lactose. Heating melted butter further so the water boils away and the milk solids brown makes it taste nicer and keep better. 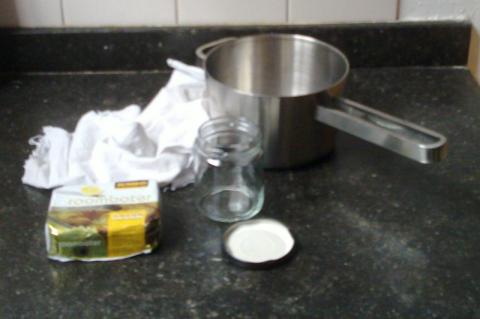 You need: 250g unsalted butter (make sure it’s not a “light” variant, it should be at least 80% fat), a thick-bottomed saucepan, a wooden spoon, a clean 200ml jar with a lid, a closely-woven cotton cloth (like a piece of old bedsheet or a clean handkerchief that doesn’t smell like detergent).

At any point before or during the boiling, place the cloth over the jar and push it in so the jar is lined with cloth.

Jar lined with cloth for pouring liquid ghee in

Melt the butter on medium heat and turn the heat down as soon as it bubbles and foams. Stir occasionally. Let it boil until it doesn’t sizzle any more when you stir it: that means all the water has boiled away. This takes about 15-20 minutes. The fat now looks rather like golden syrup, the milk solids are between dark golden brown and black.

Pour the contents of the pan into the cloth-lined jar (yes, it fits, you’ve just been boiling away 20% of the volume), gather the edges of the cloth in one hand and lift it out carefully. Hold it above the jar until it stops dripping or if you’re impatient squeeze the last bit out with wooden tongs.

Put the lid on the jar and screw it on loosely. You can screw it on more tightly once it’s completely cool, but you don’t want a jar you can’t open. The ghee will become opaque as it cools. It will keep outside the refrigerator for months. (I’ve read 6-8 months but mine tends to run out before I can test that.)

Ghee shouldn’t contain any lactose, but nobody in my family has a severe lactose intolerance so I don’t know whether there are traces that can cause trouble.

You can use ghee to enrich (vegetable) dishes and for frying anything you would fry in butter, except when you need the butter to brown. One of the advantages of ghee is that it can’t burn (it’s the milk solids that burn) so you can fry at high temperatures, for instance in a wok. I usually fry fish or vegetables in ghee, potatoes in a mixture of ghee and oil, and meat in goose fat or rendered bacon fat.

(My phone crashed halfway through taking pictures, that’s why there are only two)