One of my superpowers is “Make Food Into Pie” but of course that’s only a subset of Putting Food Into Other Food.

I’d been wanting to make lemper for some time (anecdote: the first time I made lemper it was almost accidental: cooked a new chicken dish and we noticed it tasted like lemper filling so that was what I used it for), and Spouse suggested doing it with leftover meat from the guinea fowl we’d had. There wasn’t much meat left, but I bought a bag of adzuki beans and made red bean paste so I could fill rice balls with it. It was only a small bag of beans, but I do now have enough bean paste to make filled rice balls for an orphanage, when I boil up some more glutinous rice.

I’m not giving a recipe, because I combined two and took some inspiration from a third and haven’t consolidated (let alone internalized) them yet. It worked, though. Note to self and whoever else is googling recipes: next time I’ll parboil the rice, then add coconut milk and salt and aromatic leaves, then steam again, instead of trying to steam both times. The first steaming came out uneven, the second time a bit overdone, but not so much that I couldn’t form it. The resulting lempers (now frozen) are very soft and I’ll have to thaw and heat them in the microwave on the plate they’re going to be eaten from, because they probably won’t hold their shape in the steamer.

I thought I’d be able to fill at most four lempers with the amount of filling I ended up with, but eventually I had eight! 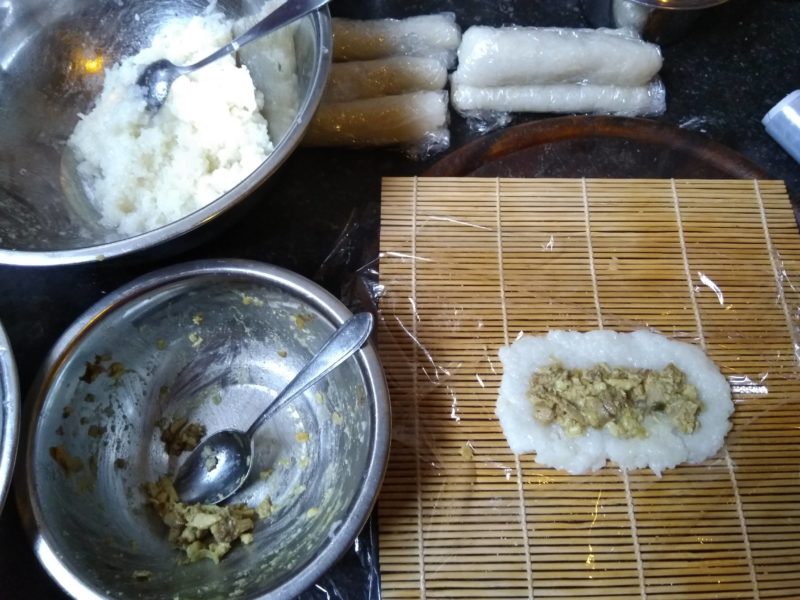 (filling the seventh here: the amount of filling left in the bowl is barely enough for the eighth, so that one is a bit smaller)

The sushi rolling mat wasn’t absolutely necessary, I could have put the cling film directly on the board and indeed did the first join-the-edges roll only with the cling film, but it was nice to get the lemper into shape with.

I got 11 (and a tiny one I ate immediately) rice balls with red bean filling from the rest of the rice, and they’re in the fridge and I eat one whenever I crave one. They’re too sweet and probably too pudding-like for Spouse so we can’t share them. Next time when I plan to make sweet rice balls and not something savoury from the same batch, I’ll sweeten the rice very slightly because now the rice tastes bland by contrast, but they’re yummy anyway.

After all this rice I went on to make vegan stuffed cabbage leaves: blitzed garlic and ginger and rather a lot of brown mushrooms with turmeric, ground coriander seed, black pepper and a bit of miso, fried the lot in oil until the juice ran almost dry, then crumbled tofu into it. I’d already teased the outer leaves off a cabbage and blanched them to soften — overcompensating because usually I leave them underdone and they’re hard to roll, this time they fell apart while rolling. But I got an oven dish full of reasonable packages, covered with tomato sauce (roux made with oil and strong miso broth, a bottle of passata di pomodoro, spiced with ginger, dark soy sauce and tamarind) and gave it 40 minutes in the oven. (And we served them to friends and everybody liked them, even the person who always grumbles when there’s no meat.)

There’s some filling left that I could arguably make vegan lemper from, it’s the right structure and has a strong enough flavour, but I think I’ve done enough modelling with sticky rice for a while. I’ll probably put it in some kind of dough tomorrow.