Last Friday of the holidays– at least for Prima who goes to a school that started on the Monday after (i.e. yesterday as of writing this) and we had a handful of rail day-passes to use up. So we set off for a town where two of us had never been, and a third only once: Groningen. It was a girls-only outing, as my other half was abroad.

It’s very hard to avoid the Groninger Museum when you get off the train, because it sits across the bridge leading into the centre, and indeed we never did go any further. Because of this: 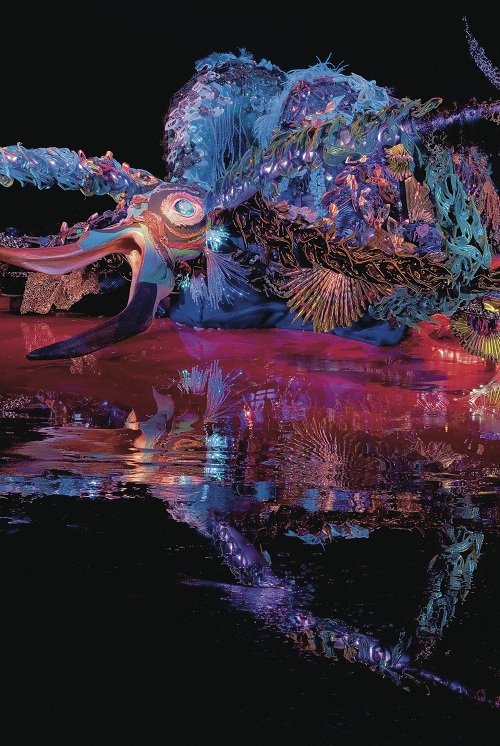 Two paragraphs deleted which failed to do justice to the thing. It was bleeping awesome. In fact it filled our brains so much that all we wanted afterwards was food and a train home.

We did see the rest of the museum too; in fact we saw most of the rest of the museum first, and used the nifty little electronic key-fob they give you to make our own collection webpage. (Link sadly gone now.) I thought I didn’t like modern art much, but it turns out I mostly don’t like modern paintings. That’s an opinion I share with Prima, who expressed it as “Pff! I can do that!” (and in fact I know that she can, because I’ve seen her do it, mostly better, or at least with results I liked better.)

I do like modern art objects and installations. Not indiscriminately, but there are things that speak to me. I found out that when something is called “Untitled” it’s less likely to speak to me, whether or not I know that when I first see the thing, so probably it means that the artist doesn’t have a clue either.

Some of it was disconcerting, like the exhibition that paired portraits by old masters with photo portraits. It gave me the uneasy feeling that perhaps the old masters weren’t all that …well… cultured after all, that even though a painting didn’t go as fast as a photo it was just a snapshot. And then I’d always thought that I wasn’t that much of a culture snob. Some, perhaps most, possibly all, modern art is meant to disconcert, of course, and it did its job admirably. I like that– though I didn’t care for most of the photo portraits, but that was probably because those were of people (celebrities) I don’t like much.