The second week of November we were in Brussels. Here: 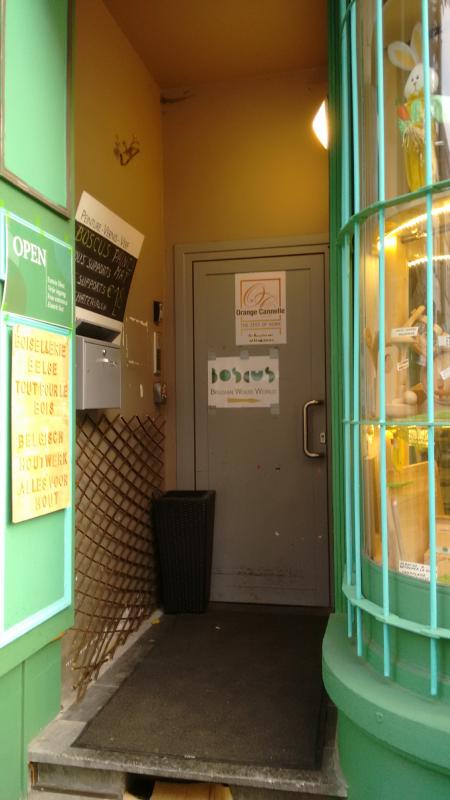 An apartment in the Rue du Midi, Zuidstraat, which is rife with second-hand bookshops and comic shops and where we’d have gone anyway if our lodging had been anywhere else in the city. It was a bit confusing how to get in, but my other half can speak French on the phone (a skill that I envy: I can speak German on the phone, never failing to amaze my daughters when they were kids, but French is way beyond me) and summoned a friendly black man to open the door for us. It turned out that we weren’t supposed to arrive before 5 — though we’d told the booking site we’d be there between 2 and 3 — because the apartment had to be cleaned first, so we left our stuff and went in search of beer.

Unknowingly, we ended up in one of the most famous places in Brussels, next to Manneken Pis: the Poechenellekelder. Not, on a Tuesday afternoon, as crowded and touristy as it probably is in the evening: a woman at a table next to us was even working on a laptop. 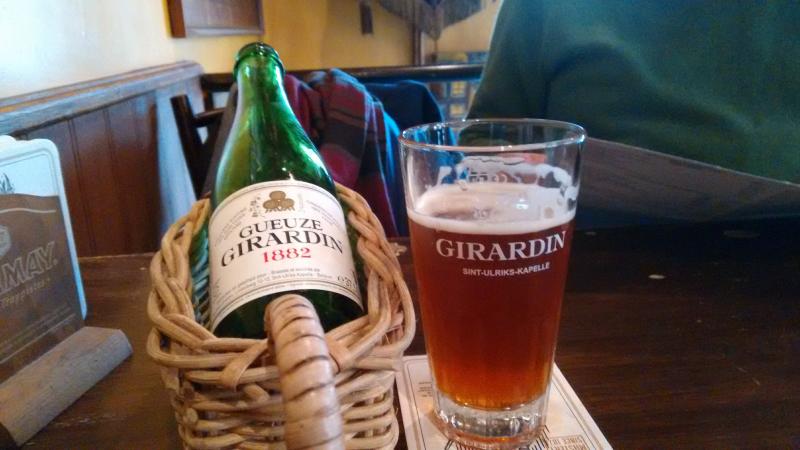 They had Gueuze Girardin.

After some traipsing through bookshops and the supermarket we came back for more. 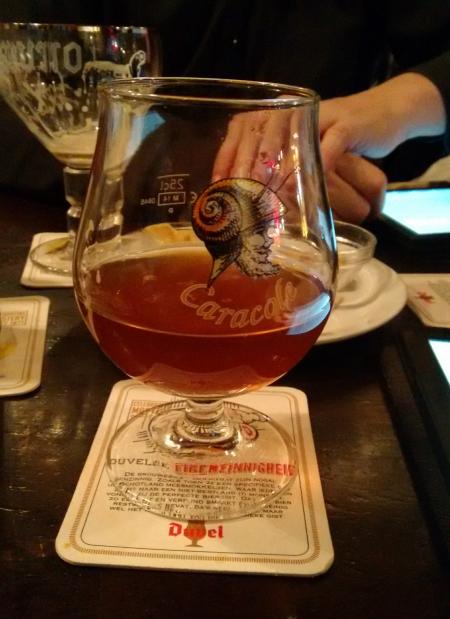 I went for things I didn’t know — half of the three-page beer menu turned out to be things I did know, either from Haarlem or from our excellent local shop (more than 300 different beers from all over the world). I don’t remember what the Caracole tasted like, only that I liked it, but that’s quite easy with amber beers. 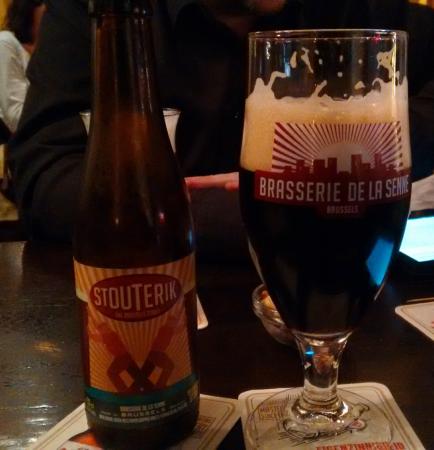 Stouterik: one of the best stouts I’ve ever had, smooth and deep like liquid black velvet. Unfortunately, very local: I bought another bottle in the shop about a hundred meters from our apartment but have never seen it outside Brussels.

Wednesday fell prey to our exhaustion which was the reason we went to Brussels in the first place. The day dawned with unwelcome news, then there was unsatisfactory breakfast, rain, a brewery that turned out to be closed because I can never get it into my head that ‘mercredi’ isn’t Tuesday, more rain, my old Eccos giving up the ghost (fortunately I had my ankle boots with me), a museum that we didn’t actually want to visit (didn’t notice it was that museum until we were inside) but where they searched my bag so aggressively that it literally made me cry. This was mitigated by a nice cafe, Houtsiplou, where we fled from the rain and the misery, and I learned that the Wallon for milky coffee is ‘lait russe’. ‘Café au lait’, which would have worked in Paris, gave me a cup of ordinary coffee and a small jug of milk at breakfast at the bakery across our street. Their milky coffee was ‘latte macchiato’, probably because they were trying too hard to be hip.

Thursday, on the other hand, was Good Museum Day. More beer! Lambic, in the last surviving lambic brewery in the city, Cantillon Brewery and Gueuze Museum. We considered staying until Saturday because that was their open brewing day, but we had unchangeable train tickets and would have had to get a hotel room for the Friday night.

But we did get to see how the lambic gets its wild yeasts, in a huge flat copper basin: 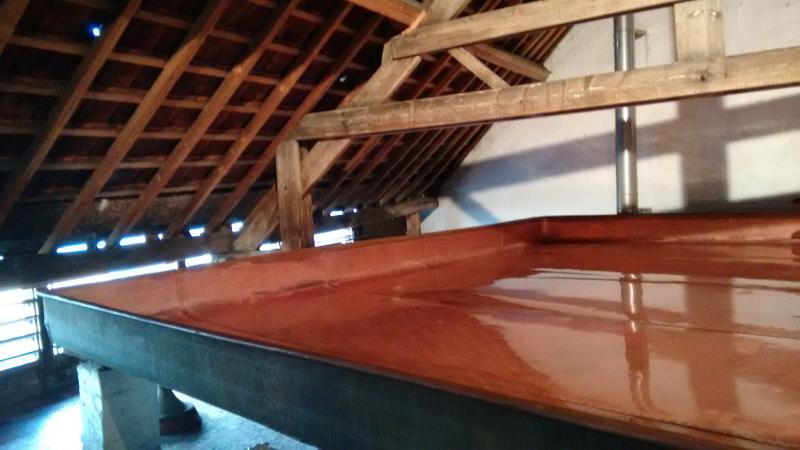 The holes in the roof are functional: that’s where the wild yeast flies in.

And this is some of the organic malt waiting to become beer.

The museum ticket included a glass of lambic, which we got from a jug just filled from the latest brew. We could have opted for gueuze or kriek, but we wanted to try the real thing, of course.

I have no proper words to describe tastes, but if the Stouterik was liquid velvet, this was liquid early morning sunlight. It tasted bright. Tart and slightly bitter, not a hint of sweetness anywhere. We made the man who served it to us smile and give us another glass from a tray left by a school outing — teenagers, half of them Muslims who didn’t want it in the first place, and of the other half only two or three didn’t make faces when they tasted it. (One girl, about seventeen, with bright red hair, obviously loved it as much as we did.) We tasted some three-year-old gueuze as well, and bought three bottles of it to take home.

(That’s 3 glasses of beer, albeit small ones, at 11 in the morning. Good thing I’d had beans on toast for breakfast at Houtsiplou, as well as another lait russe.)

And the afternoon was quite as good with the Palace of Coudenberg. Mostly underground, but there was only one bit (a road that went up while the roof didn’t) where I didn’t want to go.

Tasty food at the Thousand and One Nights restaurant because the Portuguese restaurant that we were trying to go to was closed. More rain. Beer at the apartment from one of the two Rue du Midi beer shops, with cheese and charcuterie from Catherine. 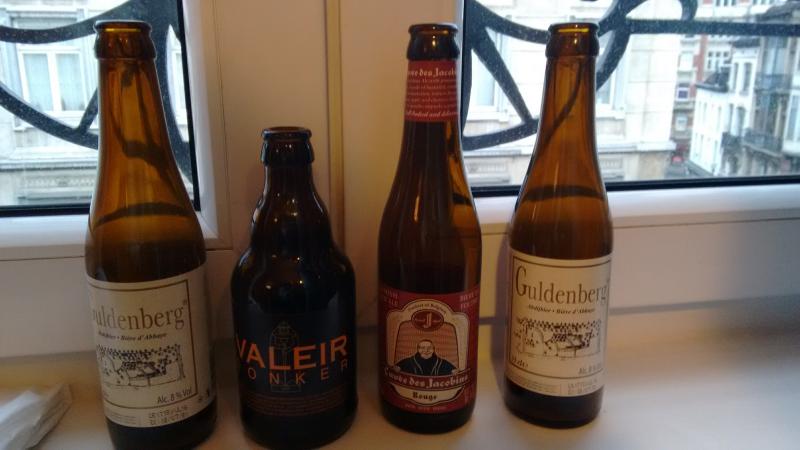 Uncropped to show the view.

On the way home on Friday we visited Mechelen and were surprised at how eerily quiet it was. It turned out to be Armistice Day! That’s one holiday we don’t have because we weren’t in that war. Most things were closed without notice — apparently people just know, except hapless tourists. Most people seem to observe it by staying inside. We did walk along the Dijle on a floating footpath, see an impressive restoration of some historic houses, and have an excellent meal (oven-baked chicory with 3 kinds of cheese!) in the main square. 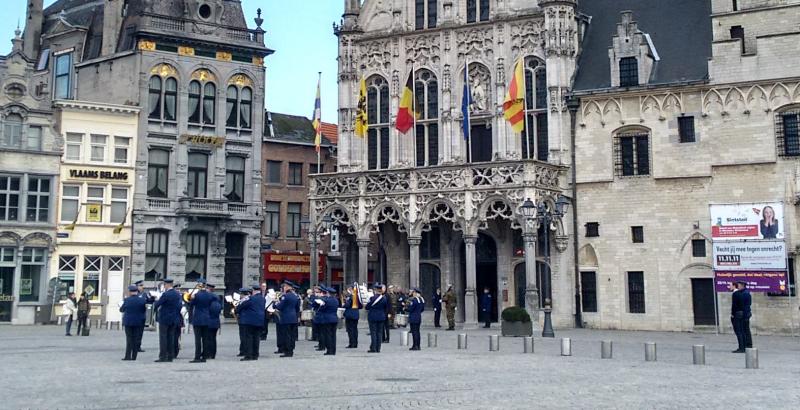 The small buff-coloured house on the left is the local headquarters of the Flemish extreme-right party. On the right is an immense poster calling for tolerance. Somehow I don’t think I’d like to live in Mechelen.