A few days ago I asked Secunda and Tertia, it being that time of year, what kind of birthday cake they wanted. Tertia said “something with lots of chocolate and cream” right away, but Secunda perused the baking book and found a hazelnut mocha meringue. “Can you make that?” “I’ve never tried,” I said, “but probably yes.”

So on Wednesday I bought a pound of brown hazelnuts, thinking I could blanch them like almonds. Hazelnuts are much less eager to part with their skins, though: it took me over two hours to peel 300 grams. The recipe called for two 24-cm spring moulds in the oven at the same time, but (a) I have only one large spring mould, and (b) I don’t have so large an oven, so I did it in two batches. This was convenient, because I could go on grating hazelnuts when the first slab of meringue was drying in the 100-degree oven. I didn’t actually get anything else done during the drying time, this complex a cake is like kulich in that it takes all one’s attention even while there’s nothing to be done to the thing itself.

The first slab came out of the oven still sticky on the underside, but I could turn it upside-down on the cake rack and put it back in the oven, rack and all, for another fifteen minutes. As I was putting the mixture (I won’t call it ‘dough’, or even ‘batter’ though it gets beaten a lot) for the second slab into the mould, I realised that I’d omitted the one tablespoonful of flour– probably not even necessary, I could have made this gluten-free, but there was flour in the first slab so I put it back in the bowl and mixed some in after all. This small mistake made me jittery, but fortunately aware of it so the jitteriness didn’t cause me to make larger mistakes.

I had to buy a jar of instant coffee for the mocha butter-cream because we never have any in the house. Secunda tried a cup and didn’t like it, but she did like the butter-cream made with it. I didn’t make it as strong as the recipe wanted (either that or the recipe writer had a smaller teaspoon), because we both thought it was coffeeish enough with about two-thirds of the coffee.

Secunda drinking instant coffee reminded me of Secunda’s godmother, my cousin the nun, who only ever serves instant– and who I’d promised to send a batch of prosphora by Sunday. So while waiting for the second slab I made prosphora dough. The second slab came out of the oven even stickier on the bottom, though drier on top, and it didn’t stay completely whole when I turned it but that didn’t matter as it was going to be covered in butter-cream anyway.

The recipe said, optimistically, “pipe a decoration with the rest of the butter-cream” after using a quarter each for the filling, the side and the top; as it was, I could only pipe ’16’ and a few swirls, not Secunda’s name as I’d intended. Also, butter-cream is a very strange and difficult substance to pipe with. I probably need more practice, but I don’t think I want to do this kind of thing more than once a year.

So here it is: 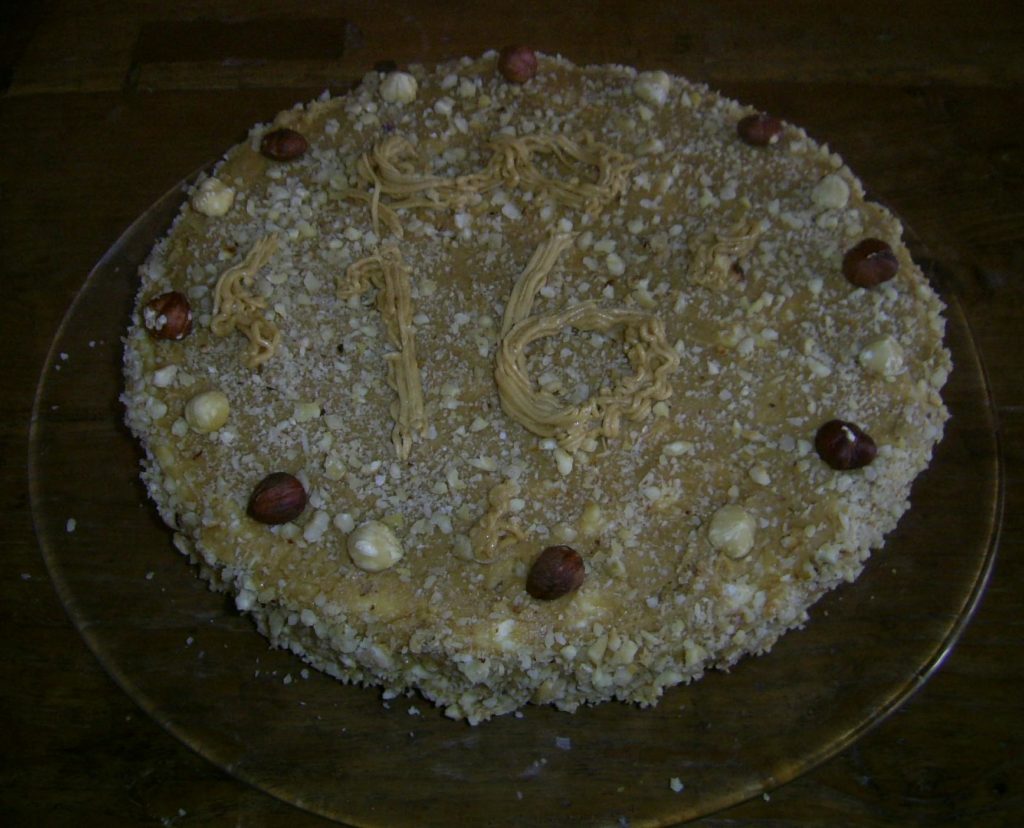 Then, after packing the prosphora and sending them off, I made an uncomplicated chocolate cake for Tertia. Only to go completely over the top with the decoration. There are also cherries inside, and cornflour-thickened cherry juice as a glaze under the cream (visible in the negative-space ’16’). 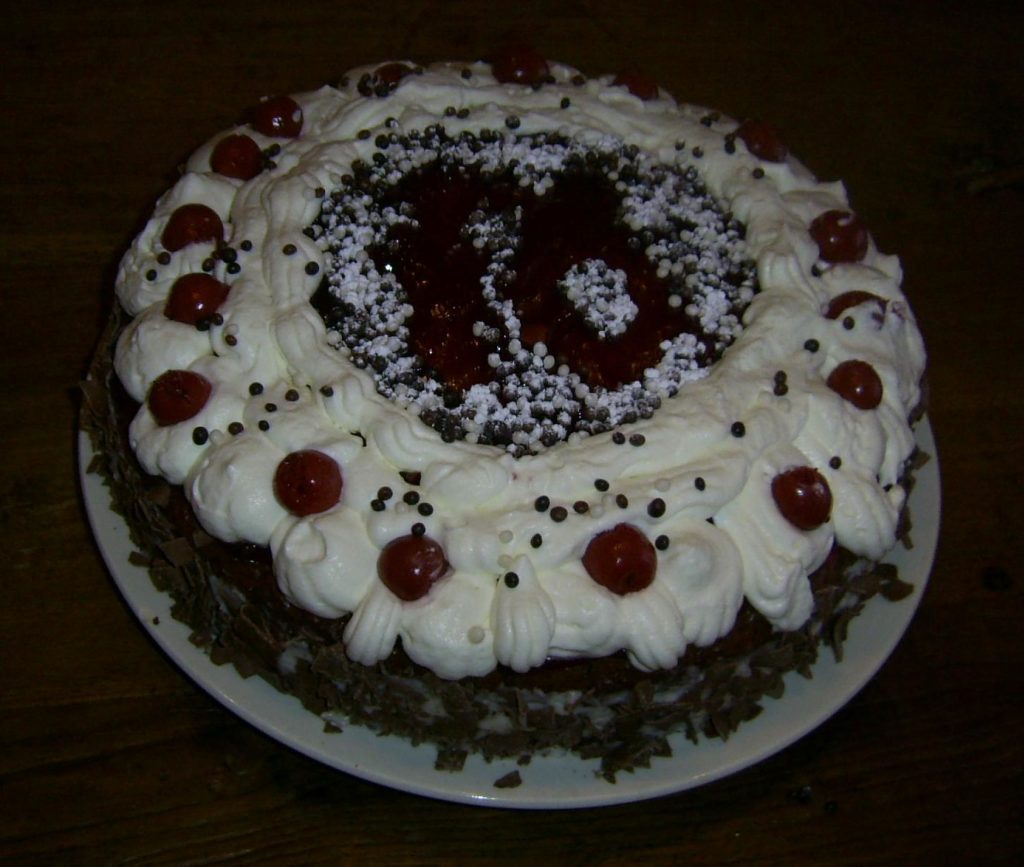 Now each cake also sports sixteen candles. I didn’t only have enough birthday-candle holders (which I’d doubted), but even more than sixteen white ones for Secunda’s cake and more than sixteen blue ones for Tertia’s. Only the candles themselves are all sorts.