I was so looking forward to CrossingsCon — what’s not to like about a primarily Young Wizards-focused virtual con!

Well, for one thing the timezone. I got up for the fanfic meetup at 2:30am my time, but for the other thing two days later I thought “well, if I wake on my own I’ll get up” and slept through it. Some things were my-evening but there was only one that I stayed up for, 23:00 to midnight, and abandoned halfway through because it turned out not to live up to my expectations.

Also, the interface. I’ve heard several people praising it because it was “so much like a real con”, but I’ve never felt this uneasy at a real con. I felt like everybody was watching me all the time, not only the people who happened to be next to me seeing me arrive or leave, or the people in the hallway seeing me pass. To make things worse, I couldn’t find an avatar that felt like “me”. 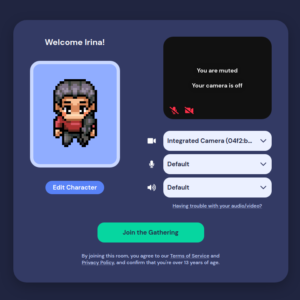 That was the closest it got. There was one avatar with glasses but it’s impossible to change the style and color of an avatar’s hair and clothes separately, the edit-character button just gives you a cycle-through-all-avatars function. It’s not even that it wasn’t realistic enough — in one of my favourite games I’m just an @ sign and that feels like “me” — but if I must have a person-like avatar instead of a symbol I’d prefer to have one I can somewhat identify with.

And the environment reminded me most of early 2000s Habbo Hotel, which we once forbade our then-tweens to play because (a) they were too young for it, (b) there was a lot of abuse/grooming going on, and (c) it had insidious payment traps. Okay, Habbo Hotel was isomorphic and Gather is 2D, and now I see that Gather is even more pixelly and 1990s-style. 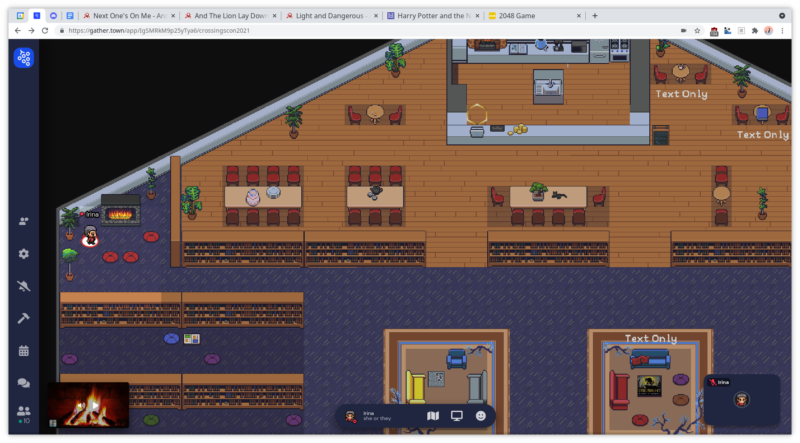 This is the library; there were a couple of nice Easter eggs, like books you could actually read (on Gutenberg), the virtual fire (left side where my poor little avatar is sitting, pressing ‘x’ got you the fire on YouTube full screen), the cat (next to the flowerpot on the table right of center, went to different livestreams of cats during the week), and in the “garden” a livestream of ducklings. Also, live games but I never saw anybody play one.

I appreciated the existence of “Text Only” corners, but never used even those because I was shy of strangers. I felt like I was in a group of people who all knew each other already, and for all I know it was that way because CrossingsCon is a thing that’s been around for a while. The only interaction I had was a couple of text exchanges in the chat tab.

I’ve been to two in-person Worldcons and I’ve had my share of shyness (check out my Helsinki and Dublin tags) but having this extra layer made that very much worse. Perhaps especially because I found the interface annoyingly ugly and unwieldy, and it was very disconcerting to see a voice/video connection trying to open every time I bumped into someone or even passed them at close quarters. I kept trying to run away, of course bumping into other people. I don’t do voice and video, unless it’s filking or a tabletop game or a Kaffeeklatsch or something else that really requires it!

If the fanfic meetup had been in meatspace, or even a Zoom-style “everybody in their own little screen space” meetup like the Christian-fans meetup at CoNZealand, I’d probably have talked about writing Young Wizards/Lord Peter Wimsey crossover, and that my first published fanfic was Young Wizards, but being a small ugly avatar in a bunch of other small ugly avatars (some of them conversing as if they were just continuing from last week) wasn’t conducive to actually opening my mouth. Also, it was nearly 3am.

Anyway, it was very nice to see Diane Duane’s and Ursula Vernon’s faces and hear their voices (also Megan Whalen Turner, whose books I’ll probably want to read now because she’s a wonderful person). Not that I was eager to enter a raffle for a private meet-and-greet with either of them; I didn’t have any actual things I wanted to talk about and it would have been random fangirling which they’ve probably had quite enough of.