Celebrating the forefeast of Spouse’s birthday (which fell on Sunday so we wouldn’t have time or energy to celebrate on the day itself) with a little city trip. We’d planned one day in Dordrecht and one day in The Hague, and booked a hotel room (a suite, no less) in The Hague for that.

Took a train to Rotterdam, where I realised that it was the Feast of Mizran (the autumn equinox) and we were in the city in the Netherlands I’ve always associated most with Mizran: industry, trade and shipping.

Then things started to get strange. “Atypical” was what we called it at the time, though in hindsight it was probably a fairly typical outing for us.

The water-bus site wanted us to be on the other side of the bridge from where the water-bus actually was, and when we’d found it we narrowly missed it. And the Erasmus Bridge isn’t hospitable to pedestrians. Remind me to take the tram next time — er, take the 7 rather than the 25 or get off one stop earlier.

A water-bus is ordinary public transport, at the same price as a land-bus (slightly over 4 euros with our chip cards) and gives a trip that tourists would gladly pay ten times as much for, and without obnoxious explanation. We saw lots of strange sights, including the replica of Noah’s Ark in Krimpen aan de IJssel. And more than one supermarket geared to the inland shipping industry. I love those “didn’t know it existed” things.

Dordrecht confused us by being eerily quiet. Almost as much as Malines, where we happened to arrive on Remembrance Day, but it couldn’t be that. We live in a town centre; on a normal Thursday there’s bustle below our window all day. It was nice weather — very nice weather — and early afternoon. The shops were open. Where were all those people?

We found a place to eat and sat down outside. 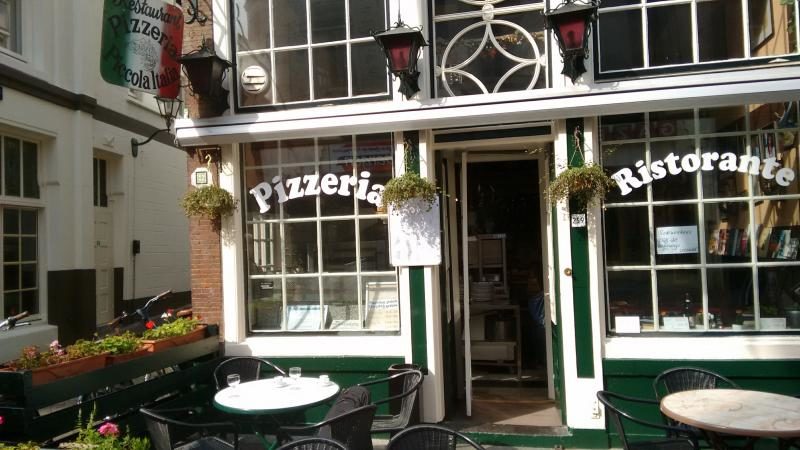 Real Italian. The pizza had a spongy crust, not the as-flat-as-possible as most other pizza places, and I think it was a regional thing though I wouldn’t know which region. It also came in two sizes, and the small size was a perfect lunch portion. Now the traffic was picking up a bit, but mostly because of Escape in the City groups, probably all from the same company outing. 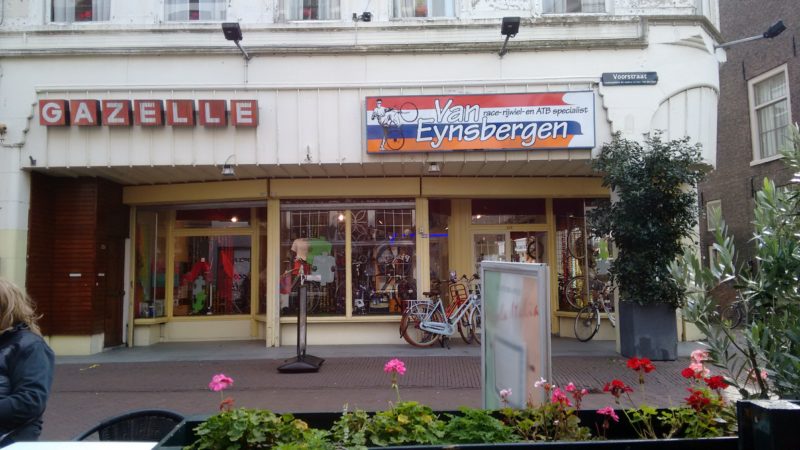 View from the terrace: large bike shop with puzzle pieces in the window, making me wonder if they had special bikes for autistic cyclists. (Not really. Just one of those random-decoration things that make one think there’s a deeper meaning, I suppose.)

The first thing we saw when we were walking around again was a board advertising boat trips. Well, we hadn’t been on the water enough, so we squirreled the information away (the next two tours were already fully booked) and went to investigate a passage to the water, the Dark Jetty (Donkere Steiger). 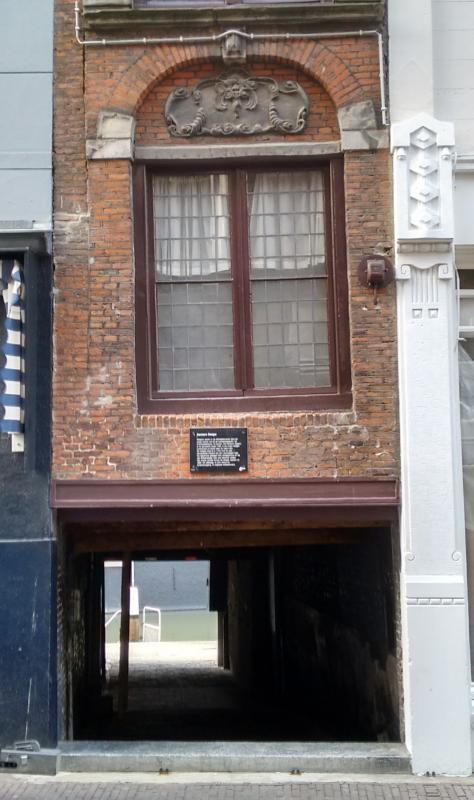 It’s called “dark” because it’s the only fully covered one of the numerous alleys-with-a-jetty connecting the town streets to the water. Nice medieval roof-beams, under the second narrowest house of the town (this is what the unreadably small sign above in the picture says, at least).

And what did we see there? A boat! “Can we still come?” we asked; the boat didn’t seem to be full. It was completely empty, in fact, because the people we thought were entering were leaving at the end of their tour. The boatman (helped by us) persuaded a couple from Antwerp who were dithering on the bridge to come as well.

That was hands down the best boat tour we’d ever had.

The boatman was working on his own, probably a hobbyist pensioner, so he didn’t have to conform to a corporate script but could show us what he was interested in, and what we were interested in! He even crossed the Beneden Merwede (or some other river, there’s a confluence of three right there, but I’m pretty sure it was that one) to show the cityscape from a useful distance. And there was a firefighter boat practicing with the hose, making a splendid rainbow which I was too late to take a picture of, but the boatman got one for his on-board picture book. 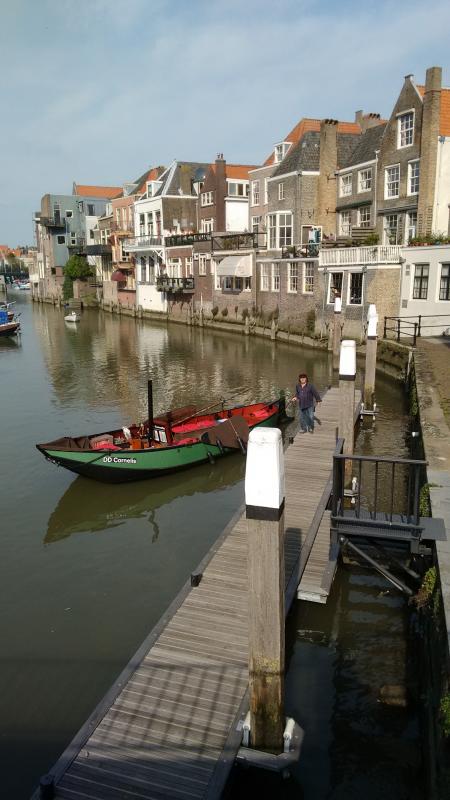 He’d got us so interested in the history of the town that we bought the local historical atlas when we happened on a Real Independent Bookshop.

Me: I should leave now because otherwise I’ll keep buying books.
Bookseller: I wouldn’t mind!
Spouse: Yes but we have to carry them to Deventer on the train.

Which led to a nice conversation about books, though no more purchases. The bookseller thought Deventer was as cool as we thought Dordrecht was, with the book market and all. But Deventer has hardly any museums, only a toy museum (not a museum that’s a toy, but a museum of toys) and the sad rotating exhibitions in the old weigh-house that purport to Tell A Story, but the people behind them seem not to be able to decide who exactly they’re telling it to, so they dumb it down so much that we felt we weren’t being taken seriously when we visited the current one. (Sorry, the language drop-down menu there has only Dutch. These exhibitions are obviously not for the tourists.) And Dordrecht does have museums, in spades!

“May I tell this story about the people who came especially to Dordrecht from Deventer?” the bookseller asked, and of course we said yes.

Then we just had time for the Patrician’s House, which we’d seen from the boat. Nice video in the attic, such a breath of fresh air after the inane videos we’d seen in Deventer. The view from the round room was amazing! It made me envious of the children who’d had this room as their playroom — just think that the parents moved out, to a house with a garden, for the children. I don’t know if they had any part in that decision.

We found an atypical comic shop: kept by a middle-aged woman, and with a lot of things that our local one doesn’t have. There was a beautiful boxed set that I gave to Spouse as a birthday present.

We found an atypical wine shop and bought a bottle of Macedonian red for the evening at the hotel. (But didn’t drink it until we got home, because we had a beer with dinner and cider afterwards.)

Back to the quay to narrowly miss another water-bus. Apparently it’s very easy to miss water-buses. 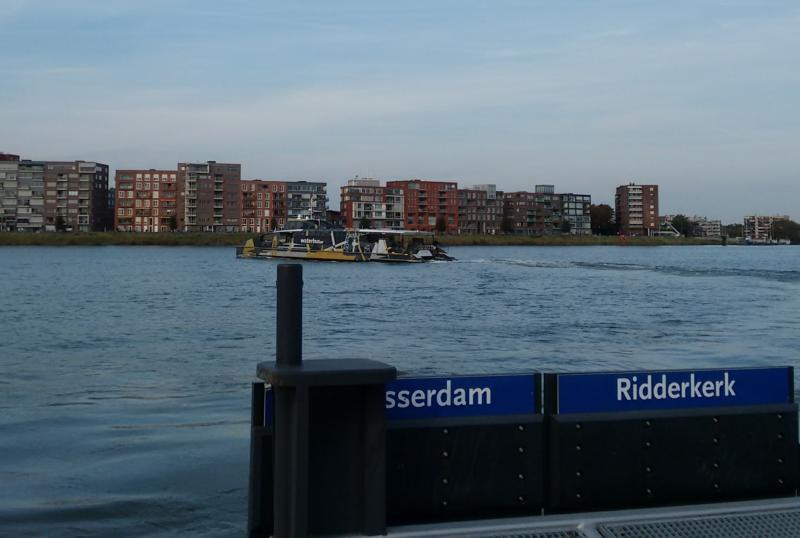 Water bus. Without us on it.

The next one made us reach Rotterdam just as the sun was setting, which makes me want to take an early-evening water-bus in the middle of winter to see all the harbour lights. What we did see was the party boat Nehalennia, looking deceptively historic.

On the train to The Hague we talked about how splendid Dordrecht was, “what’s against going back tomorrow?” Nothing, of course. But first the most luxurious hotel room I can remember having ever been in. A suite, including a huge bathroom with a bath actually designed for two people. 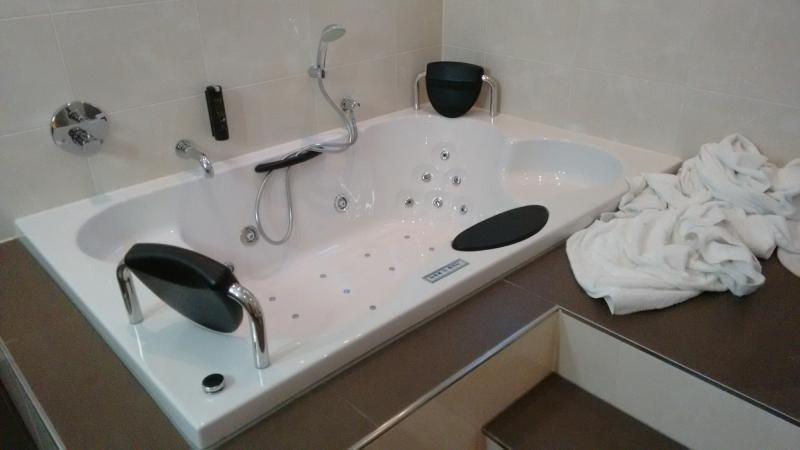 We shamelessly used nearly all the towels. And tried all the intriguing tiny controls, some for bubbles, some for water jets (turned those off quickly because everything made a dreadful noise) and some for underwater lights. We left the underwater lights on and lay in the bath reading for a while. Then the ultimate decadence: room service food (rather decent chicken satay with peanut sauce but far too many fries) which we ate dressed in hotel bathrobes. Cider from the craft beer shop on the corner — good thing we only had one little suitcase between us or we’d have bought far too much there.

The mattress was better than we had at home, but the covers were much too warm (besetting fault of hotel rooms everywhere, I’m afraid). Excellent breakfast but I’d have been disappointed by anything less at that price (32 euros! Each!)

And best of all, another day in Dordrecht. The weather wasn’t as splendid as Thursday, so it was a good thing we’d already had the boat trip and today was museum day.

Dordrechts Museum. I love this kind of medium-sized-town museum, with art as well as history, often set up by collectors and other rich donors in the 19th century. Exactly the right size: plenty to see but your feet don’t ache and your brain doesn’t fill up. Lots of wonderful paintings of families with many children, good-looking young men and women, and rich little kids. (One painting of a rich little kid I couldn’t see as extensively as I’d have liked because every time I got back to that room there was another high-school group being told about it, four times in all.) 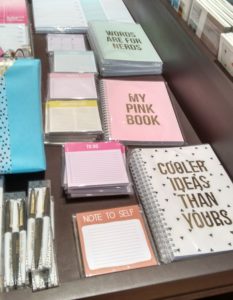 Also delectable stationery in the shop, which I resisted.

The fish restaurant on the bridge was advertising a lunch deal, so we went in and ate something completely different. Partly because the lunch deal included eel, which we don’t think humans should eat if they can help it — there are many less-endangered fishes in the world — but mostly because other things on the menu looked even more attractive: Spouse had proper bouillabaisse, with at least three different kinds of fish in huge chunks, and I had the best shrimp croquettes ever. With salad made of 90% tiny root celery cubes and 10% equally tiny tart apple cubes. And once we knew that we could get almost every wine by the glass, we had interesting wines (one each, different but I don’t remember what they were) as well.

Then Huis van Gijn, where what impressed us most was the wonderful lighting. Summary of the Dutch article: they’re using special LED lamps in the old lighting fixtures, which come as close as possible to the original gaslight or candlelight. It cost loads of money but it’s absolutely worth it: it gives a very good period impression, it doesn’t generate heat that can damage the exhibits, and it’s better for the environment than other kinds of lamps.

Here’s a random bull’s head in one of the narrow streets. 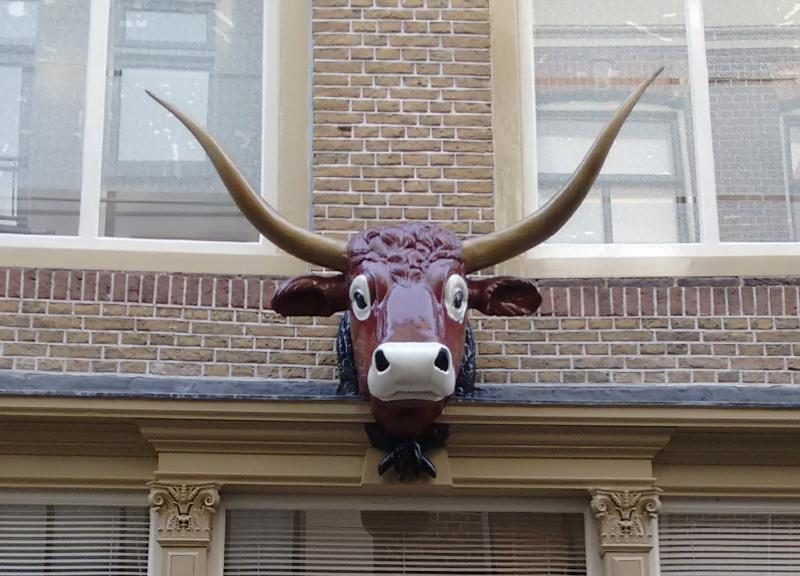 Or an ox’s head, probably.

We’d seen in the margin of the free tourist map that the Rutte distillery had tours with a mini-tasting, and it was actually more or less on the way to the station, so we thought that a good close to our outing. Bought interesting booze (alder-bud eau-de-vie, extra-aged korenwijn, pear eau-de-vie, ginger liqueur) and had a “kickass older woman” (in the words of someone who called me one once; she qualified) show us and half a dozen other people around. One woman wasn’t used to strong drink at all, and three others (including Spouse and me) wanted to taste our gin without tonic because we couldn’t bear tonic. Verdict: celery gin tastes better than most other gin I’ve tried but I’d rather have the juniper stuff.

We got home in the middle of the evening and ate the crackers and ham and cheese we’d bought for the hotel, and drank the Macedonian wine, and were content. (A)typical and wonderful outing.