(Warning: contains some door-and-key geekery because I like little strangenesses.)

We’re still in Sevilla, but the holiday is officially over: Libre Graphics Meeting, which we went to Sevilla for in the first place, started on Thursday night. I did take the morning off to go to a hipermercado, which probably deserves a blog post in its own right or at least a large part of the food post I’m planning. (Let it suffice for now to say that we ate lots of yummy food, some cooked by us, some at restaurants, some even bought ready-made.)

Our apartment is still wonderful. Even the times when we can’t sit in our tiny patio because it’s too warm, or the neighbours pour something stinky down the drain, it’s no penance to be inside. To get inside, we need four different keys. We have two bunches of keys and none of the shapes match, but I’ll describe the ones we use most often. 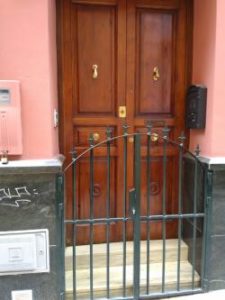 The front door itself has two locks, but we use only the upper one. It closes by itself, sort of, but we’ve been asked to lock it whether we’re in or out, unless we’re only in and out for one moment to fetch something or use the toilet. We usually lock it anyway because it’s become a habit. It needs the intricate safety key. 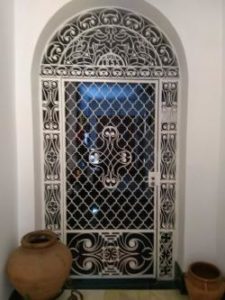 The white iron gate needs the eight-sided key, and I call it “the Anshen gate” in my head because of that. It announces that it was made in 1855. Closes by itself with a satisfying metallic twang. 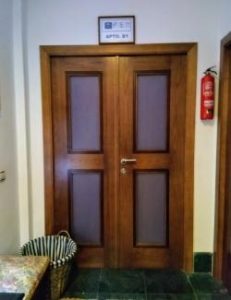 The apartment door needs the symmetrical-trapezium key (can’t find the right terminology: it’s like an equilateral triangle with the top lopped off) which fits slightly below where one thinks it fits so it can be hard to unlock the door. We lock the door and leave the key in when we’re in, though there’s probably no danger in leaving it unlocked.

There are ROADWORKS. Roadworks are the local hobby, or perhaps passion. All the streets are tarmac, meaning that if you need to dig up a water-pipe or something you need to dig up the whole street. And the stretch of street just around the corner from our alley is getting a new covering, meaning a new maze of pieces of yellow barrier every day. One dog was unlucky: 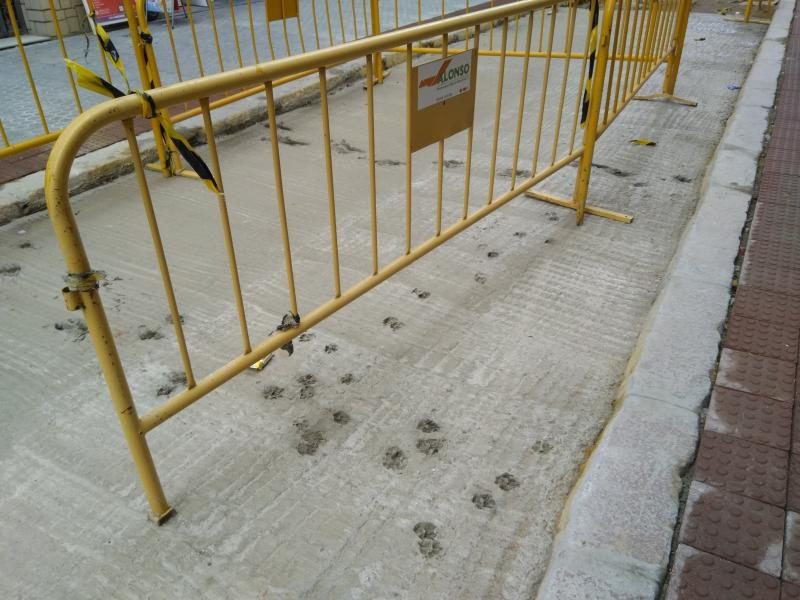 I was going to say “we did all the tourist things” but we did pointedly not do some of the more obvious tourist things: skipped the bullfight, the flamenco evening, the sightseeing bus, the boat tour. Even though we were so easy to recognise as tourists that bright young women and boat-captain-uniformed men kept trying to press flyers on us. (My father-in-law, who we went to Málaga to meet because he’s staying about 40 minutes by bus from there, did go on a tour of the bullring –when there was no fight on– and told us how badly he saw the bulls being treated, so even if I’d been interested for cultural reasons I wouldn’t have wanted to go. The fake knight tournament in A Coruña in 2015 was much more fun!) As I already thought, carrying a heavy shopping bag full of groceries protected me 100% from tourist touts, even though I was wearing my ordinary clothes (no little dark blue cardigan) and hadn’t dyed my hair black like most Spanish women my age seem to do. 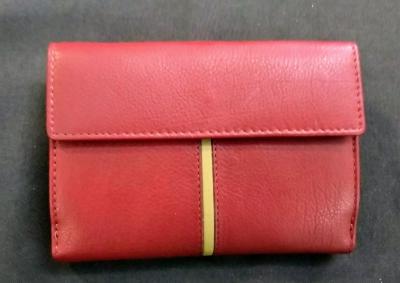 I bought a new purse! A wonderful red leather one with RFID protection inside. Pity I don’t have my new bank cards yet to protect in it. All I have is some money and my St Anthony medallion and today’s bus tickets and a couple of receipts that I’m keeping because they have Castilian, Basque, Catalan and (I think) Galician on the back. I also had a restaurant promo card, but gave it to some LGM people who considered going to that restaurant. 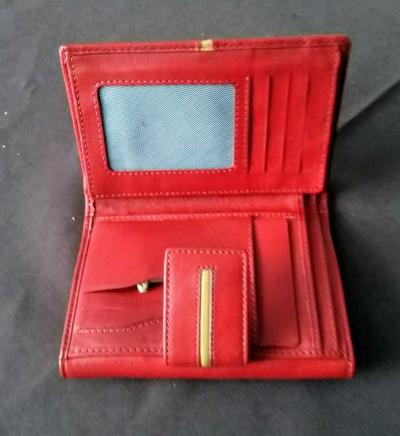 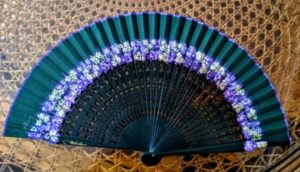 I also bought a hand-painted fan in a real fan shop where people buy stuff they need to be a Spanish lady or gentleman.

We went back to the Museum of Fine Arts. We were actually planning yet another visit, so Spouse could do some more drawing and I could sit down in front of an artwork and let it inspire me to write, but the afternoon we were keeping for that (Tuesday, after the admin stuff) both of us were too tired and hot and thirsty and lazy to do anything else than sit in the patio drinking anis seco with a lot of ice cubes and reading. Like many museums of fine arts where we’ve been, it must have started as “we have all these things we inherited or collected or accidentally acquired otherwise, let’s show them”. This one’s collection was mostly from the confiscation of monastic property in the nineteenth century. There was a small exhibition of paintings by Murillo, whose Inmaculadas are not at all boring, and some interesting other stuff. 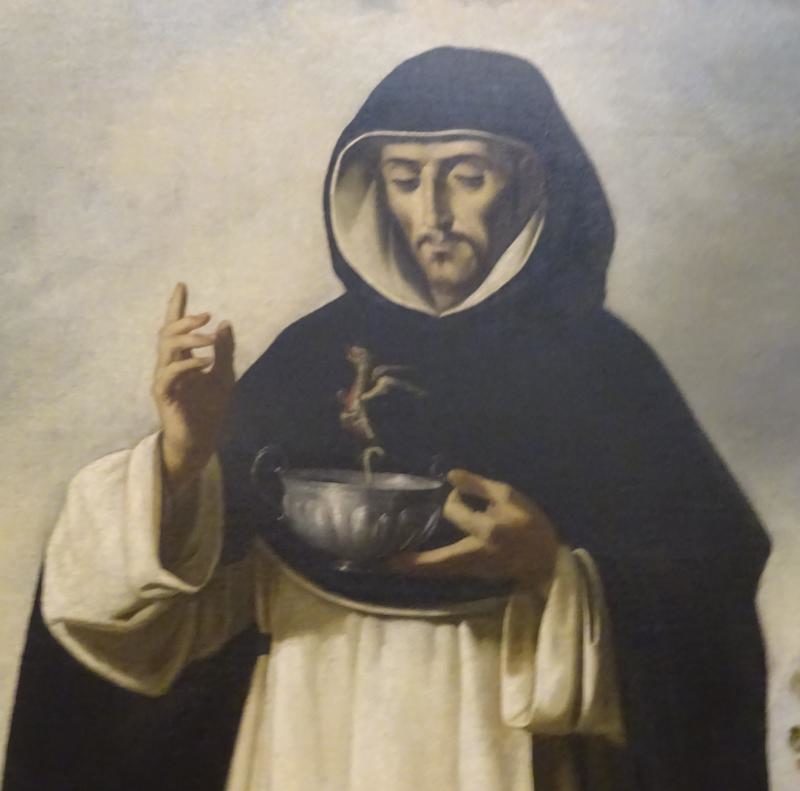 “All I wanted was to drink my wine, and now there’s this tiny dragon in it!”

The Duchess’ pages, who might have been painted by Lawrence Alma-Tadema (but in fact it was José Villegas Cordero; they’re contemporaries). 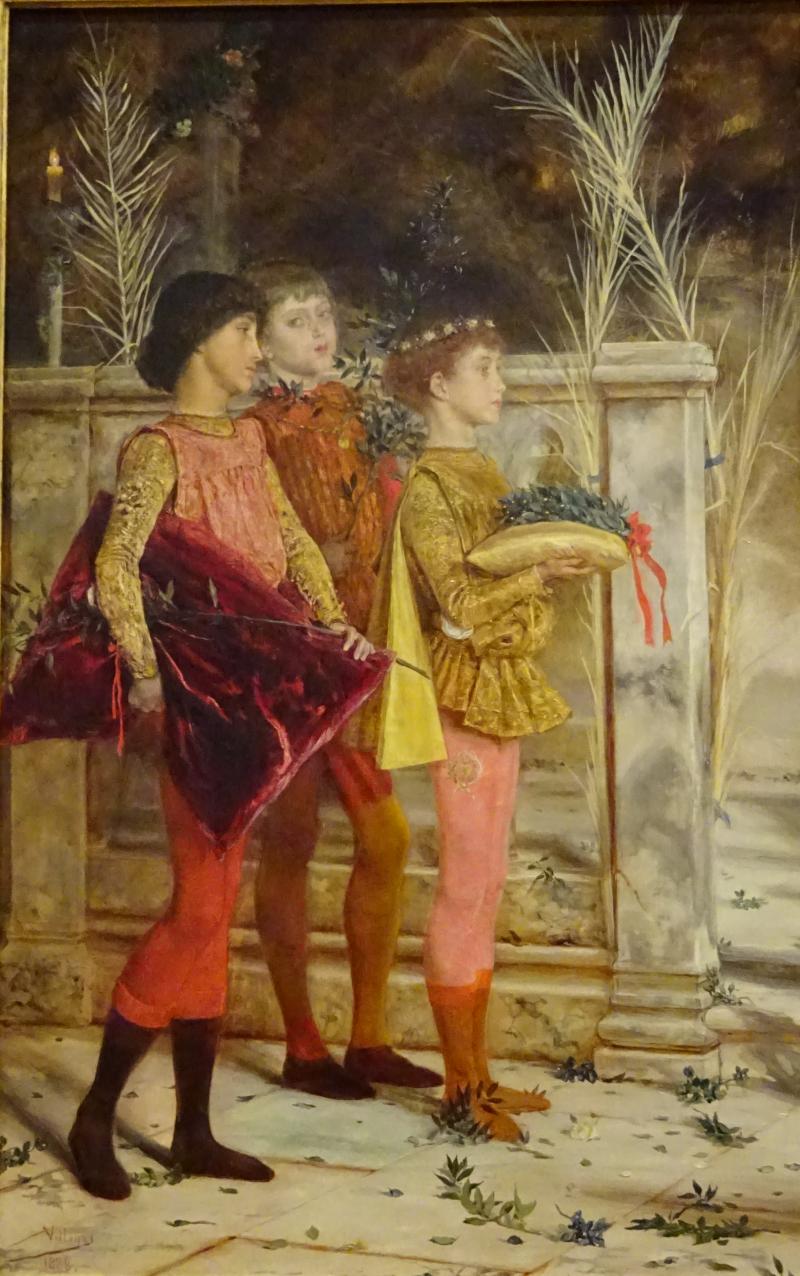 (I have more pictures but they don’t do justice to their originals anyway. Just go there when you get the chance; if you’re not a EU citizen it’s not free, but cheap, something like two euros.)

We went to the cathedral. It cost 9 euros per person, which seemed a lot until we learned that 2/3 is used for the upkeep of the building and its artworks and 1/3 for the poor of the city. It was overwhelmingly big, and full of groups of Japanese and Chinese (separately, not mixed), so very hard to actually see anything. But I did meet the patron saint of the internet: 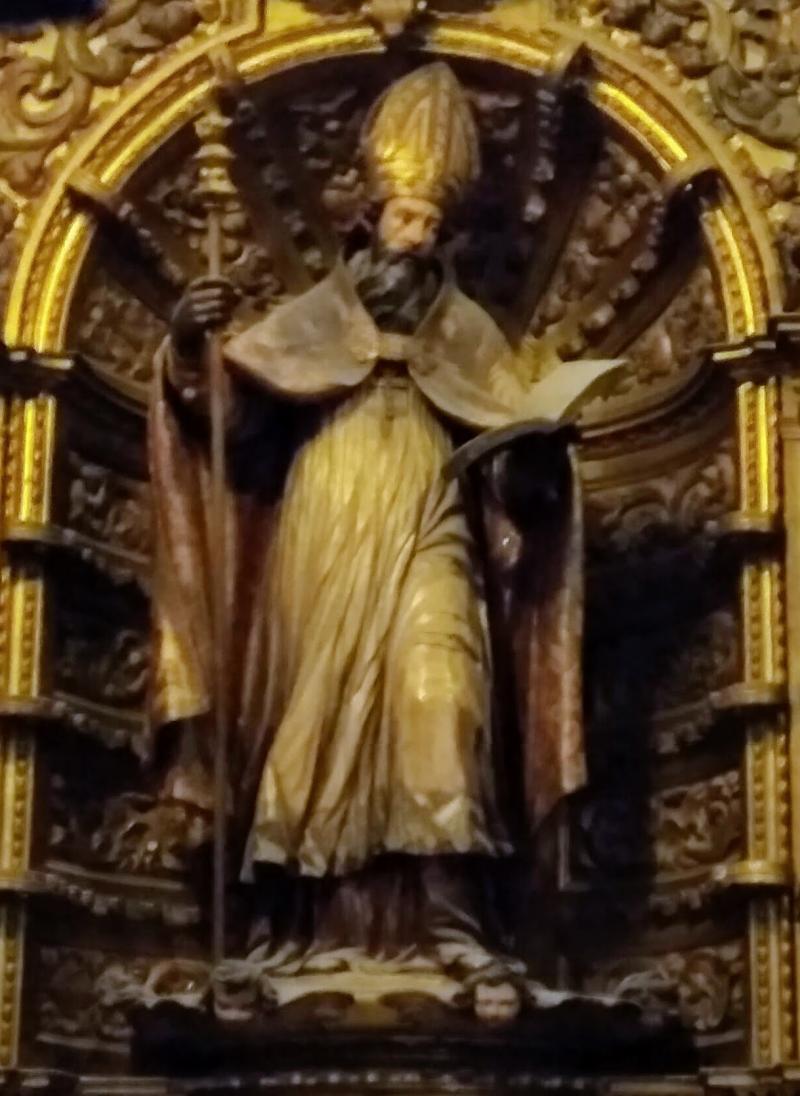 Apart from several schools and at least one street called after him, there seems to be very little evidence here that he’s important. Not even a medallion in the church-tat shops, though I found my bone St Anthony of Padua medallion while looking for an Isidore. The Orthodox church where we went on Sunday, and will go again tomorrow, has lots of icons for sale but no Isidore either.

We went to Real Alcázar (still not “the”, though that Wikipedia article is of two minds about it). More groups, though mostly French and some English and German rather than Asian. I felt that I was in the way of everybody’s pictures all the time, and I was becoming more and more unhappy until we managed to escape to the gardens. I still don’t know if the whole thing was disappointing — after all, we saw only the public part, not the famous royal apartments — or there were just too many people to feel the mood. I also found I liked the intricate stonework better than the tiling, but that could be a function of preferring (monochrome) quiet to (colourful) noise at that moment.

One question about the tiles: are these lions trying to eat snakes, or snakes trying to bite lions in the tongue?