It’s not often that I want to blog about a product. Especially not a brand-name product– I don’t use many of those, because the only quality that tends to set them apart from house brands is the price. 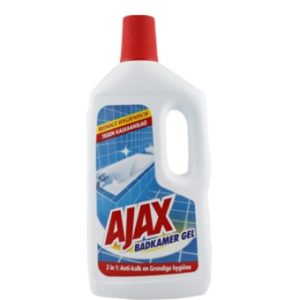 But I used to buy Ajax gel bathroom cleaner. I’m only barely good enough at cleaning, so anything that makes it easier is a boon. It was blue, so I could see where I’d squirted, and dissolved easily, so I could see where I’d wiped, thick, so it stayed where I squirted, it made washbasin-and-bath dirt go away better than plain water or default general-purpose cleaner, had a sort of nice smell, and wasn’t so expensive seeing how long a bottle lasted.

And then, as seems to happen with anything in a supermarket that I like, it was discontinued. After exhausting the last supplies of several shops I emailed the manufacturer “dear $MEGACORP, I liked your Ajax bathroom cleaner so much and nobody sells it any more, why have you discontinued it and what shall I use instead?” and got a non-committal “there was no demand for it any more, research has shown that customers prefer our spray cleaner which is easier to use.” (WTF, no demand for it? I demand it!) Well, at least they replied. Better than most. 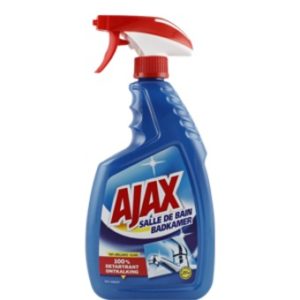 Giving them the benefit of the doubt I tried the spray cleaner. Perhaps I shouldn’t have– I know that I don’t like a spray, because it always spills where I don’t want it and doesn’t arrive where I do want it. I don’t see why so many people think it’s easier to use, because it’s not, the only difference is that you don’t get it on your hands so much. The smell is about the same, but that’s the only similarity. For one thing, it’s invisible. If it was electric blue like the old stuff, or indeed like the bottle, it would at least be possible to use it efficiently. Of course it’s profitable for $MEGACORP if people don’t use their product efficiently, it makes it run out sooner! I wonder if it’s advertising that makes people prefer a spray, because I don’t see much advertising and I prefer hands-on cleaning stuff.

Next: it’s thin, so thin that it starts running down whatever you spray it on as soon as it arrives. After a couple of bathroom cleanings I’ve learned to spray above where I want it, which still causes some waste but not as much as it did when I tried to spray on the relevant spot. And to make it that thin, it seems to have been diluted so much that it doesn’t clean as well as the old blue stuff did. Which also means that I’m paying through the nose for water.

No, $MEGACORP –it’s easy to find out which one if you’re interested– when this bottle runs out I’ll try something else, thank you very much. Perhaps even go back to default general-purpose cleaner and a bit more elbow grease.