Christmas Tree Light Up game. I found it when I wanted to play Deep Freeze, which lives (or at least is linked) on the same site. 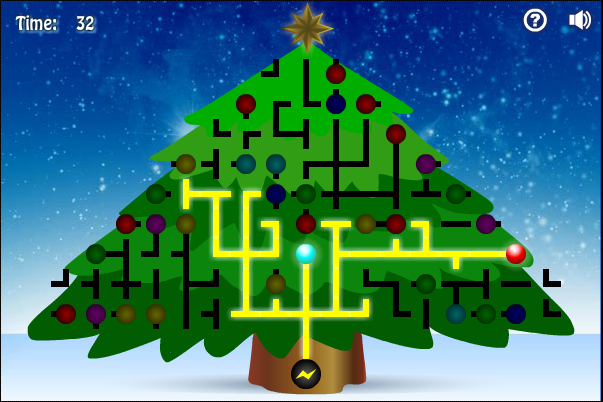 That I call it a toy rather than a game is because it’s non-competitive — it isn’t even scored on this site, though I found it on another site which does score it,  probably by reverse-rewarding fast play. There I got a score in the 32K range and the high scores were about 45K. There’s a winning condition (light up all the lamps) but no losing condition, the timer counts seconds but up rather than down. I typically need 2-3 minutes to finish, my record is about 80 seconds, and one very frustrating bout took me 693 seconds (eleven and a half minutes). You can’t get so stuck that you need to restart, as can happen in Pingus which I’ve also been playing lately.

Wat you do is click on the objects (lamps and pieces of electrical wire) to rotate them, in order to connect them with each other and with the source. As far as I can tell there’s only one solution. I can imagine that a more methodical way of working than mine can get at the solution faster, and I suppose that this is what the 45K people did, but for me it’s a way to have my conscious brain distracted while my backbrain works out how Jilan gets round Lyse, and what I will do to my players tomorrow when they investigate a suspected poisoning (they suspect that someone must have been poisoned; evidence found, but no victim identified) in Istila. –Er, I digress; that’s why I’m not seeking to actually get good and/or fast at the game.

Idly wondering how it’s set up; if I were to make it I’d probably build a perfect circuit first and then randomly rotate the pieces.