I was going to do a “The Train in Spain Part II” post, but then life happened and it was gone from the “really need to write this” part of my mind. So I’ll post the planned Part III instead: my collection of signs, with comments. Warning: long and nerdy and Full Of Pictures. 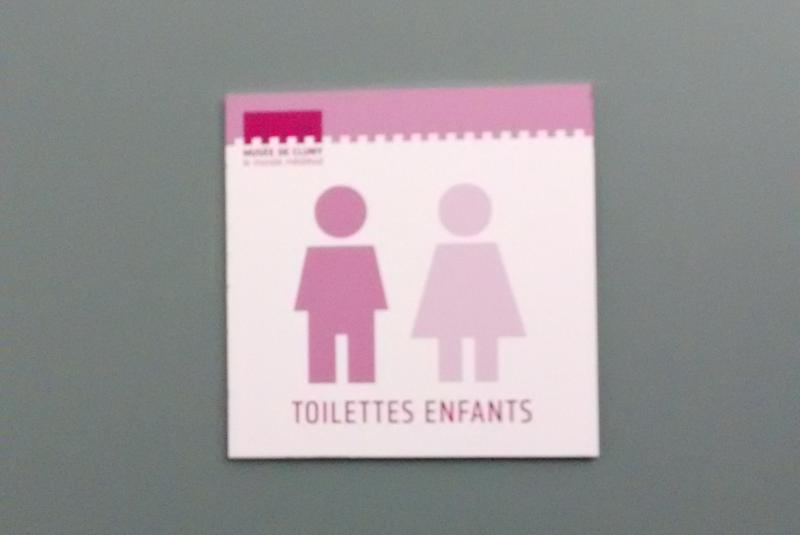 The Musée de Cluny actually has a children’s toilet. Perhaps there’s one in the men’s room too (this was in the women’s room); I sincerely hope so for fathers accompanying their small offspring. I’ve never seen one in a public place that wasn’t a school before.

A Coruña has its very own meridian, inlaid in the pavement of the main city square. Note that it’s not at all a round number. I thought for a moment that this longitude couldn’t be right –after all Deventer is 6.16 degrees– but then I realised that Deventer is 6.16 degrees east and A Coruña is 8.23 degrees west. It’s so far west, in fact, that it ought to be in the same timezone as Dublin (at 6.14 west) or London (practically at 0.00, obviously) but instead it’s CEST like the Netherlands, making it seem much later in the day by the clock than by the light. Which it actually is, of course. 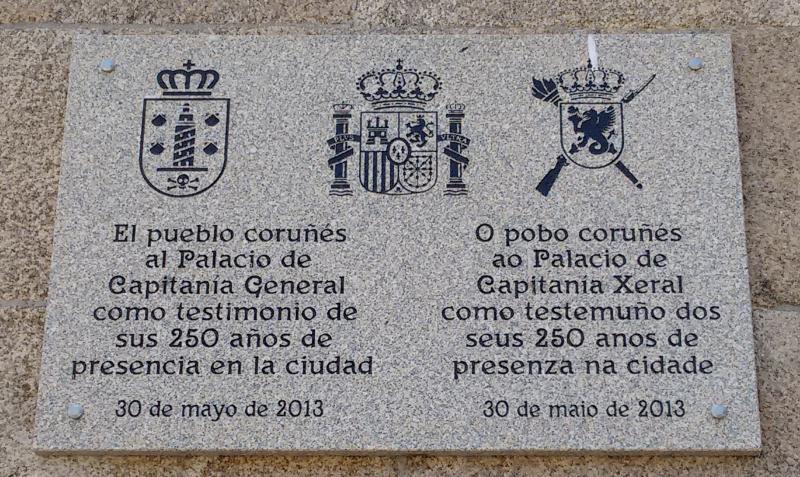 Bilingual sign on the Palacio de Capitania Xeral, or General if you’re Castilian-inclined. 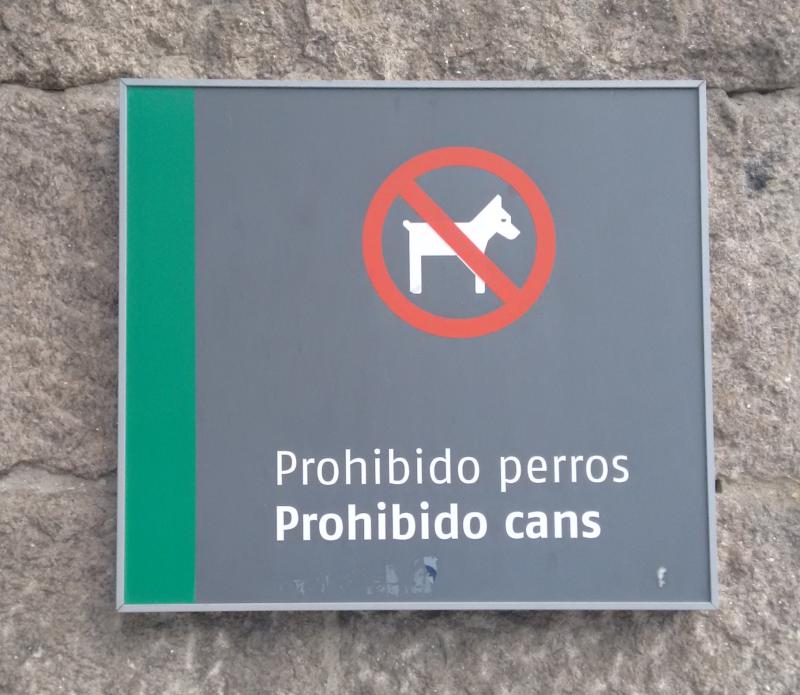 Another bilingual sign, making it clear that Galician stayed closer to Latin than Castilian  (“Dogs not allowed”, FYI, at either Pontevedra or A Coruña station, they both had one). 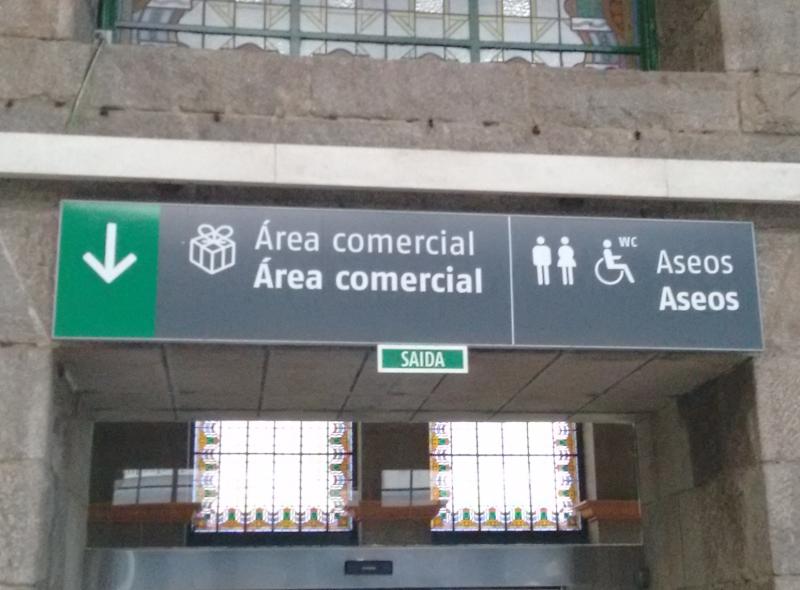 The only difference in this sign is that the Galician is printed in bold. The ‘exit’ sign (saída) is in Galician; Castilian would have been ‘salida’. 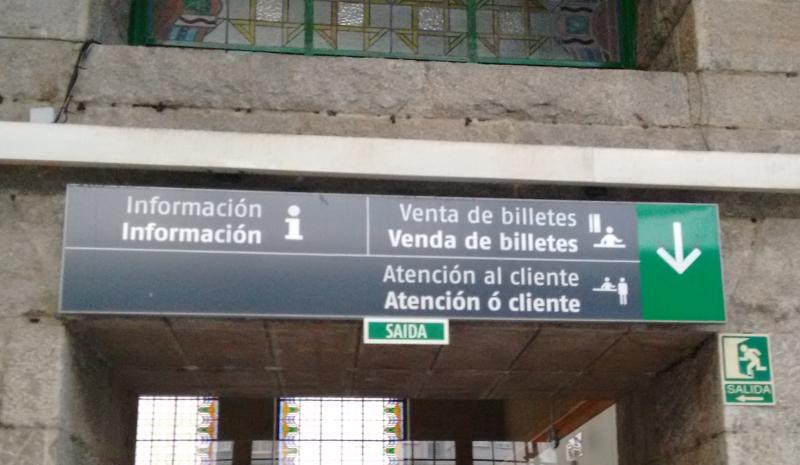 All railway signs are bilingual –even if there’s no difference at all, or only one letter– and signs in other places are completely unpredictable, possibly a function of who put them up. The museums and the aquarium had bilingual signs too, making it much easier for people who don’t really know Spanish but can puzzle it out with Latin and French and a smattering of Portuguese and Italian. 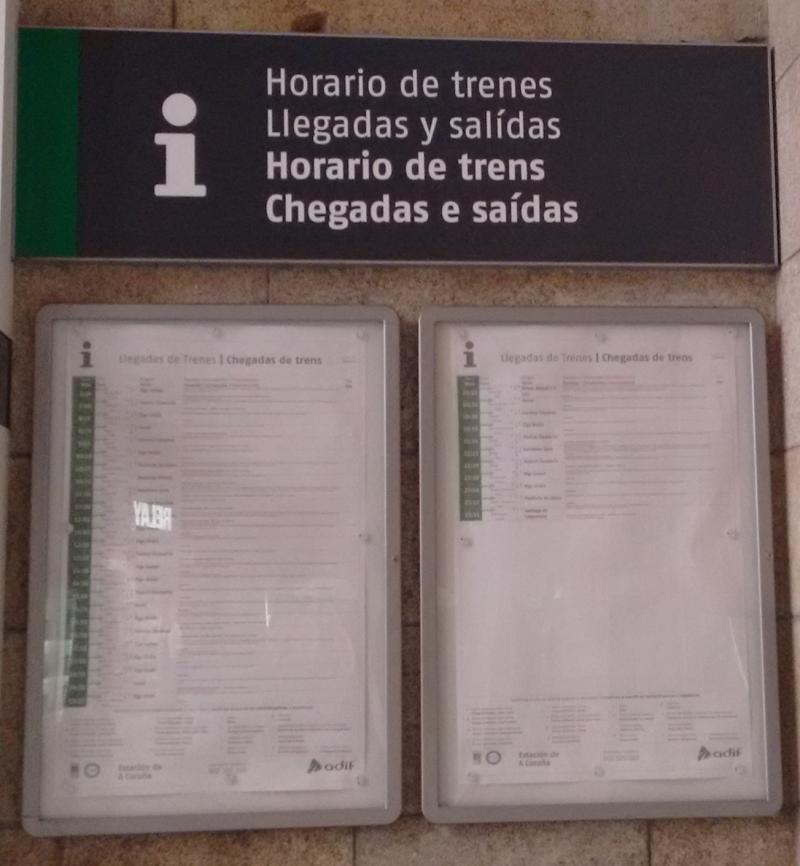 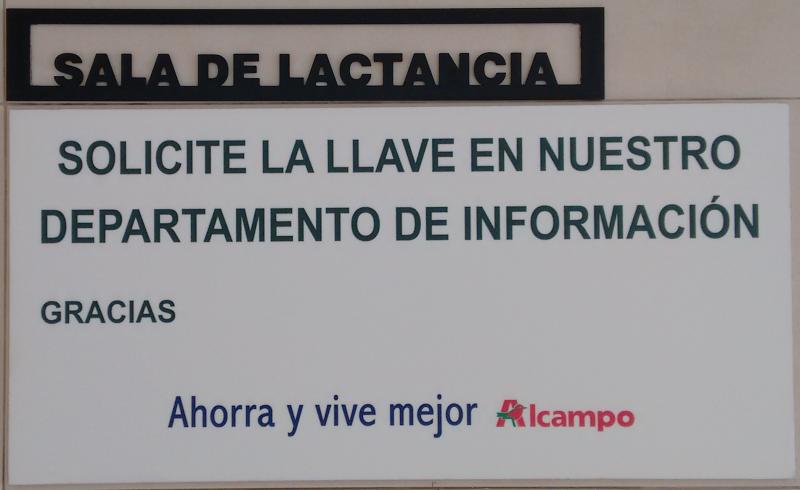 This is a Castilian-only sign in the shopping centre: “Breastfeeding room. Ask for the key in our information department. Thank you.”  EVERY SHOPPING CENTRE OUGHT TO HAVE THAT. Also (obligatory language geekery) llave < clavis. 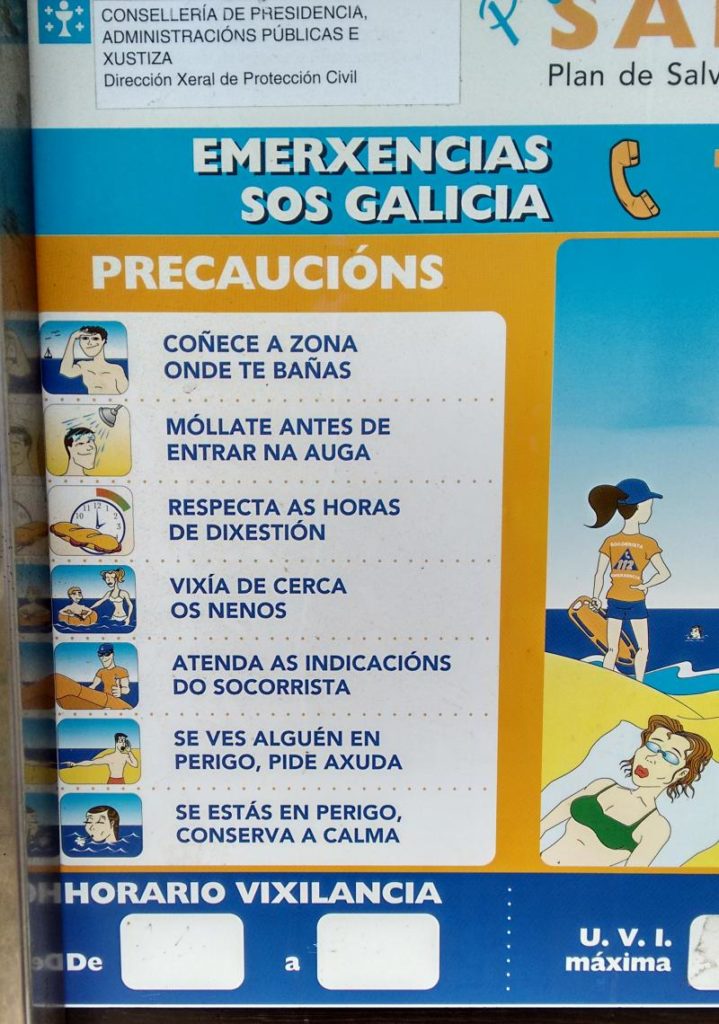 This sign, on the other hand, is completely in Galician — safety regulations for the beach. I boggled at the “shower before bathing” advice: to avoid getting your salty sweat in the even more salty Atlantic Ocean? But then I realised that “móllate” means “get wet” and that does make sense: if I’d done that it probably wouldn’t have been so beastly cold. The sign promised 17 degrees, but it didn’t look updated, and indeed it was more like 10, or 12 at most. (Also, they have the really outdated “horas de dixestión” advice, which I didn’t keep either.) 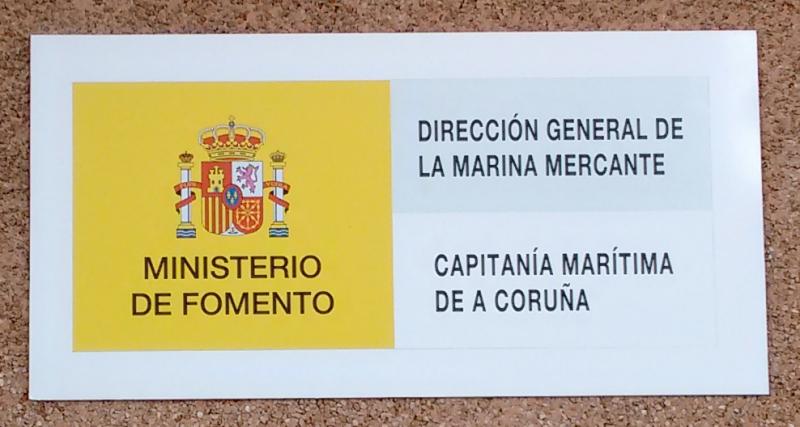 We read this as “Ministry of Unrest” but according to Google Translate it is “Ministry of Development”, and the tiny Spanish-English dictionary (for Spaniards) which I bought in a second-hand bookshop gave “industry”. 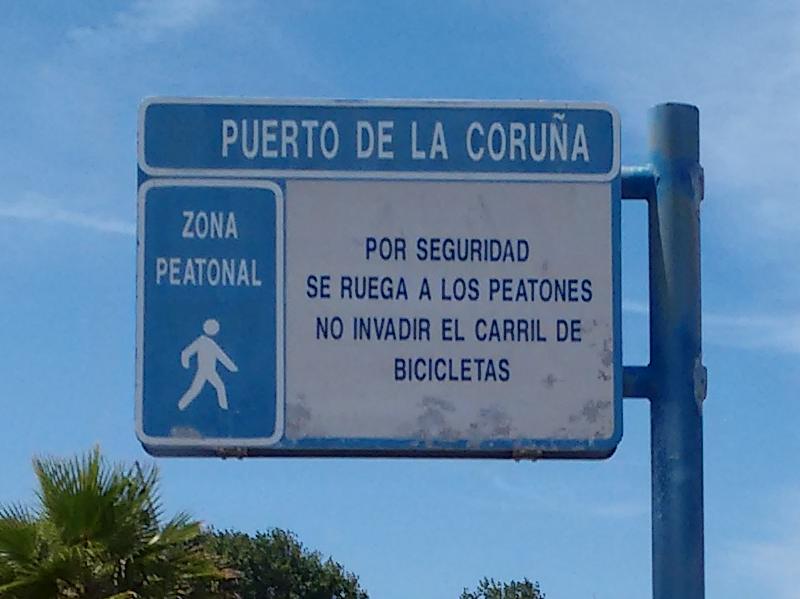 “For safety, pedestrians are asked not to invade the bicycle path.” So we called off the invasion, though it was tempting because the bicycle path was mostly in the shadow and the footpath completely in the burning sun. 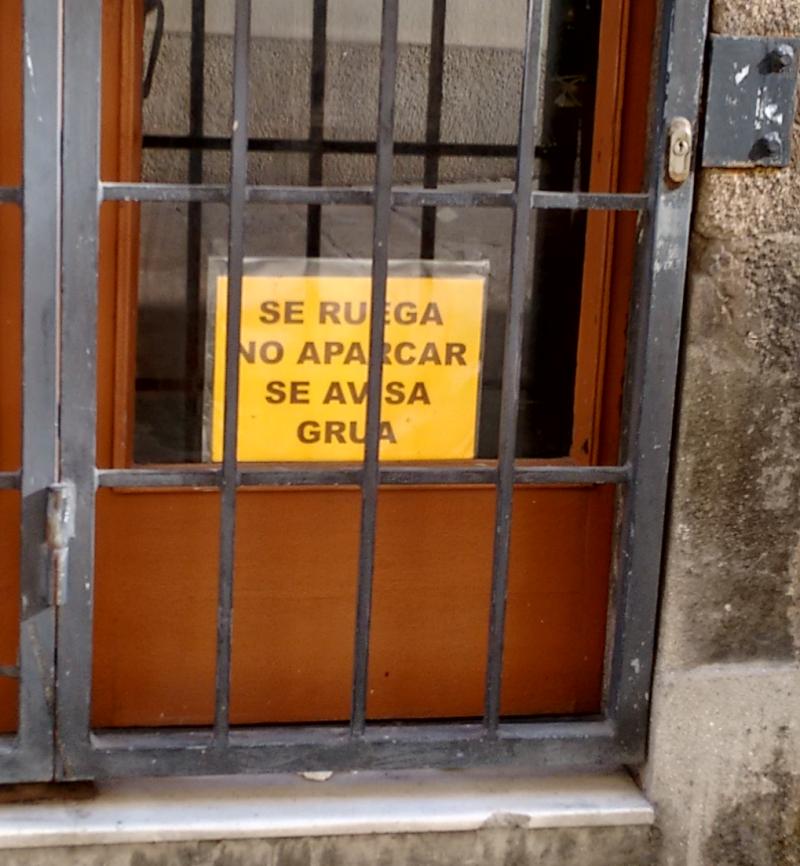 “No parking please. Beware of the grue.” … er, actually “Warning: (you will be) towed”: grua means ‘crane’, as in the thing on a tow-truck, not the bird with long legs and a crest like a crown. 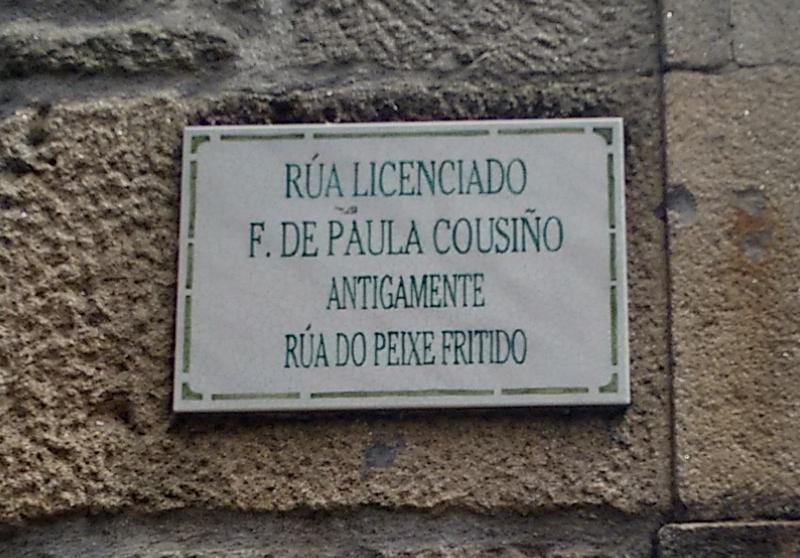 I took this picture to find the street again with my phone’s nifty navigation thing, but the resolution of the phone screen wasn’t high enough to enlarge it enough to read it. Ah well, I found my way eventually. But “street of the fried fish”! 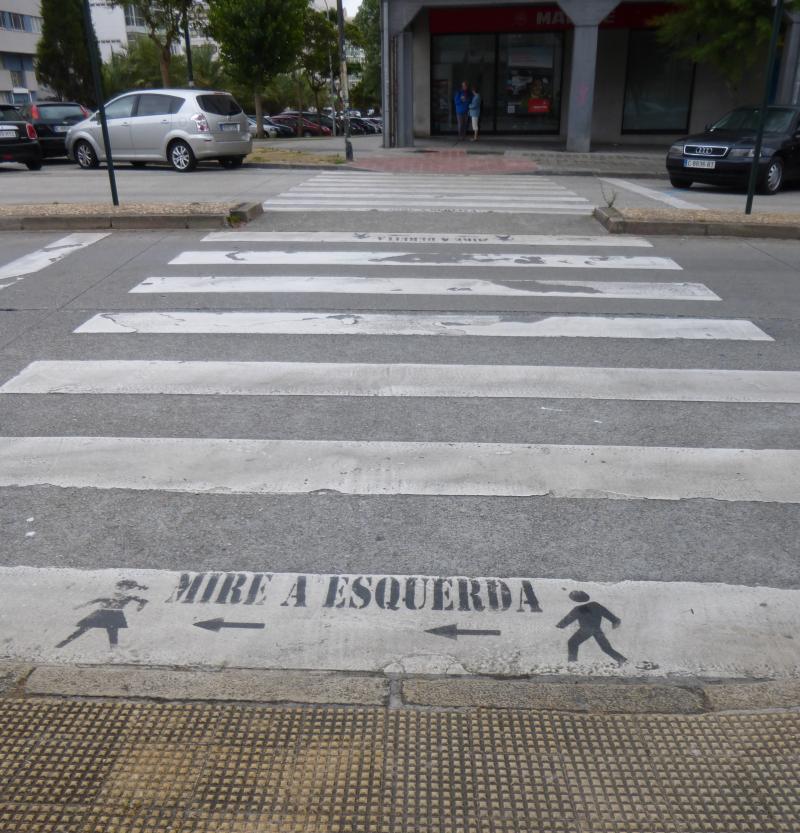 “Look to the left”. I don’t know if there was another sign on the opposite side saying “Mire á dereita”. [ETA: There is. With my new glasses I can actually read it, which I couldn’t when I had the outdated prescription.] Galician ‘á esquerda’ = Castilian ‘a la izquierda’ = Basque ‘ezkerreko’. It’s nice to see a Basque loan-word in Galician! 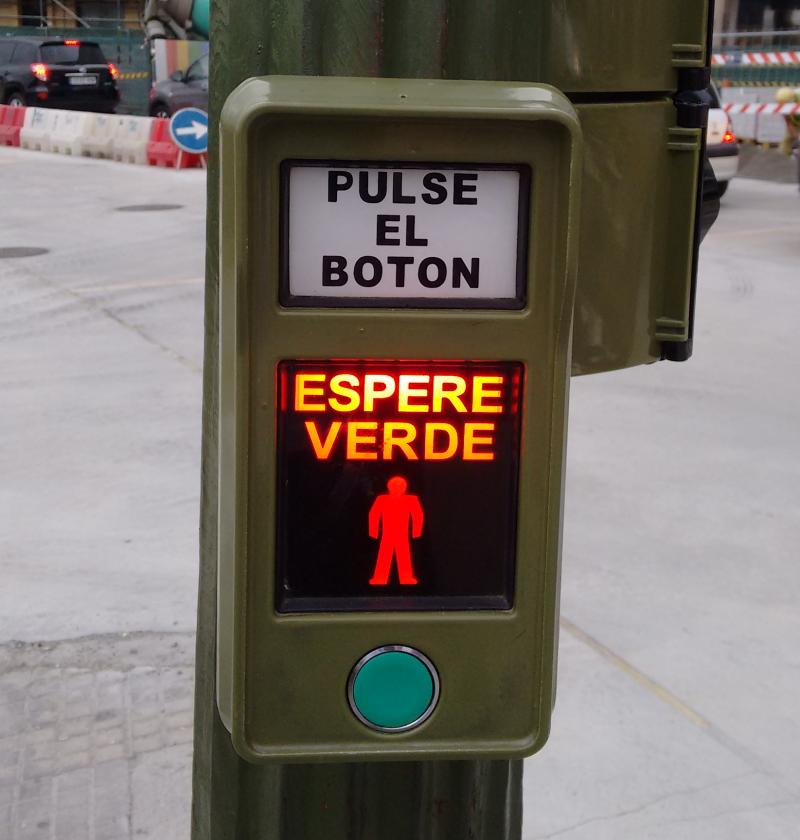 “Press the button. Hope for green.” My hopes were fulfilled every time. Railway stations also have a “sala de espera”, a Hall of Hope. So much more satisfying than waiting. (Yes, I know it means “wait”, no need to comment and tell me.) 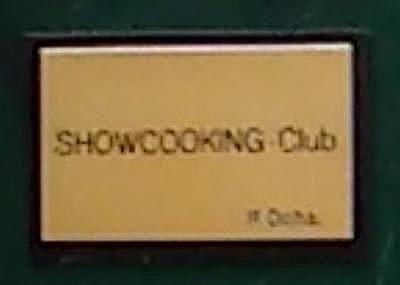 A very small sign on a large dark green door in the town centre. 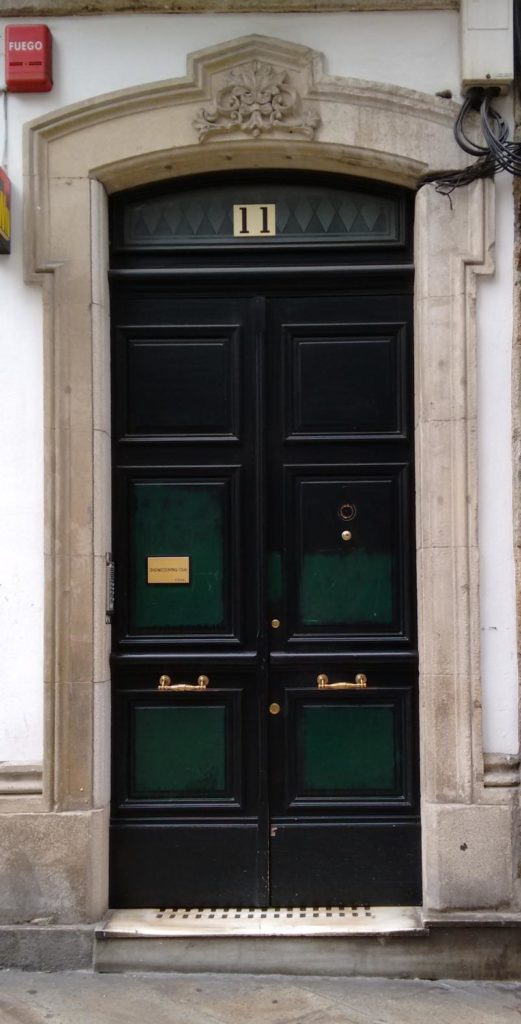 It must be this, people who come to your house or event and cook a spectacular meal. 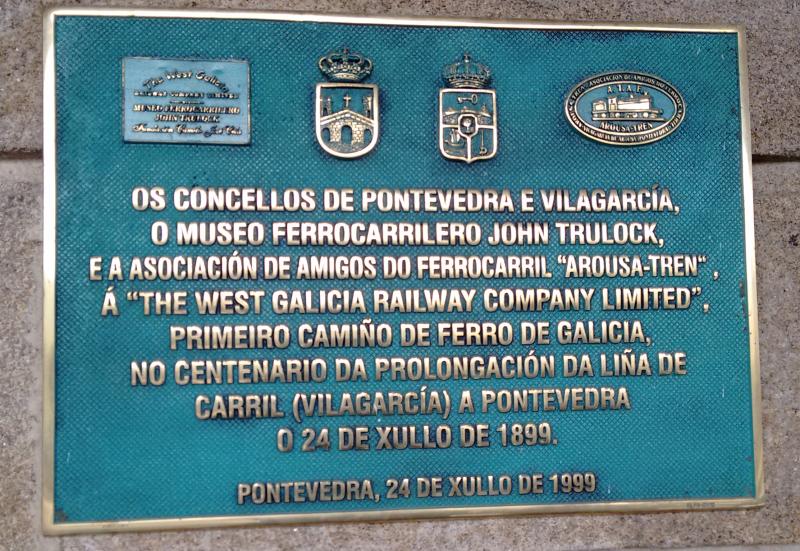 Memorial plaque in a nice little park where we’d have wanted to stay longer if the Historical Reenactment Society hadn’t been playing WWII songs at the foot of the hill that the park was on top of. It’s in Galician, which already shows in ‘os’ rather than ‘los’ and becomes abundantly clear with ‘xullo’ for July.

Now for the Department of Strange Vending Machines:

I was sort of sorry that I didn’t need any electronics. Or to charge my phone, in fact. 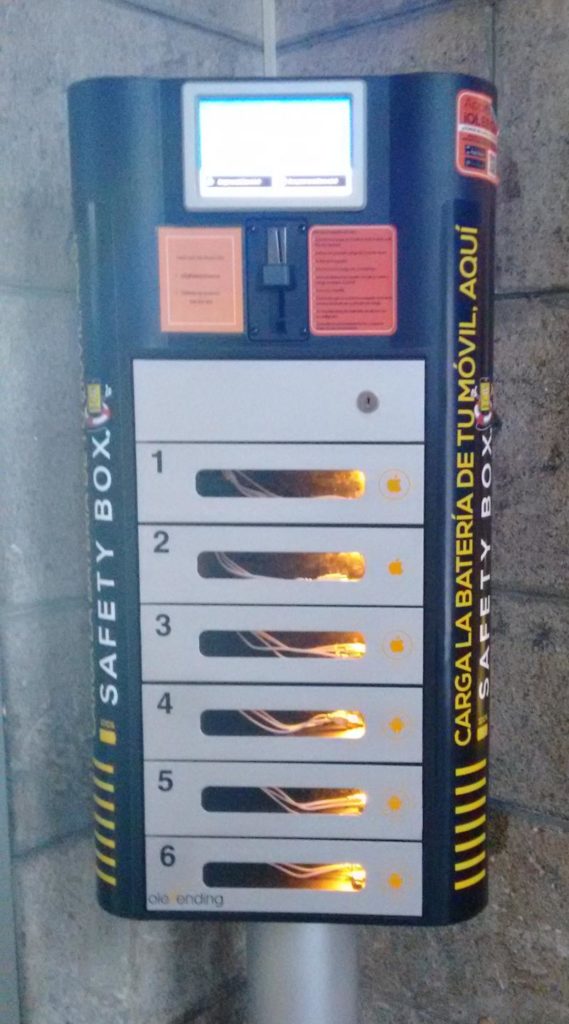 I couldn’t really figure out how this worked, but I assume you put your phone in one of the slots to charge it and go away, taking the key, so you can retrieve it when you come back and it’s done. (Update: local supermarket now has one too. Might use it some day to see how fast it is.) 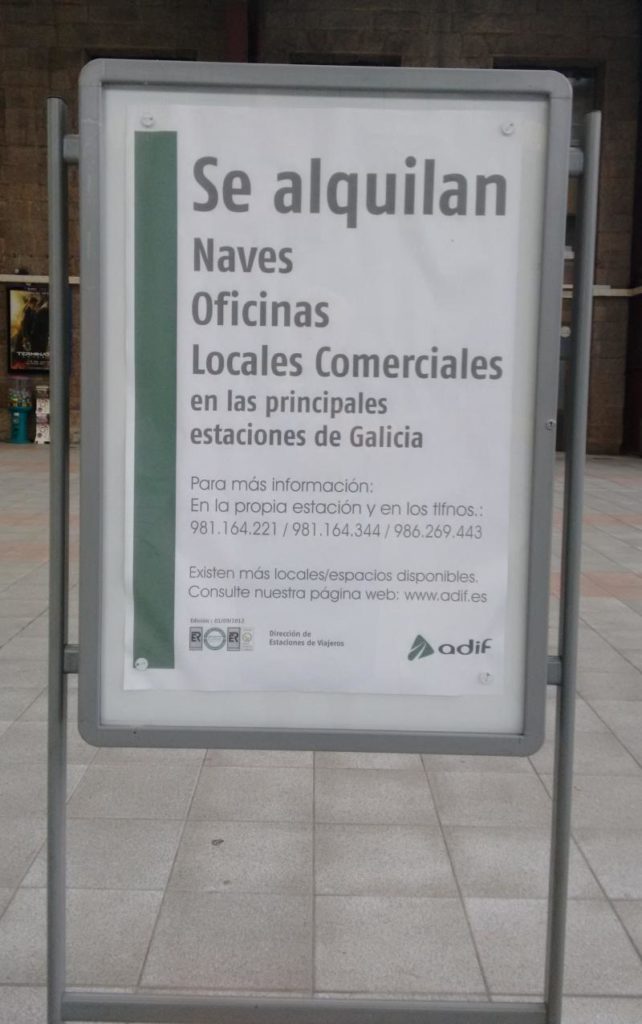 I was wondering why (and how!) they’d have ships (naves) to let at the station, but it actually means ‘sheds’ or ‘storage units’. 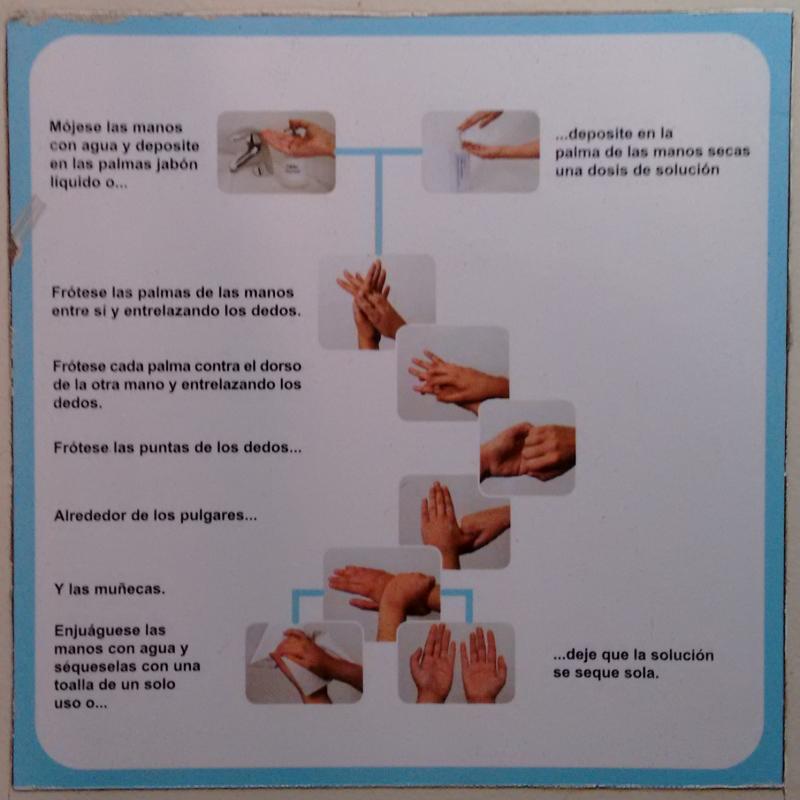 In the train through the north of Spain, the most elaborate hand-washing instruction ever. More elaborate than I’ve seen in hospitals, in fact. Not that it was any use, seeing the state of the toilet.

Basque from Irun (see also the end of the Train in Spain post): 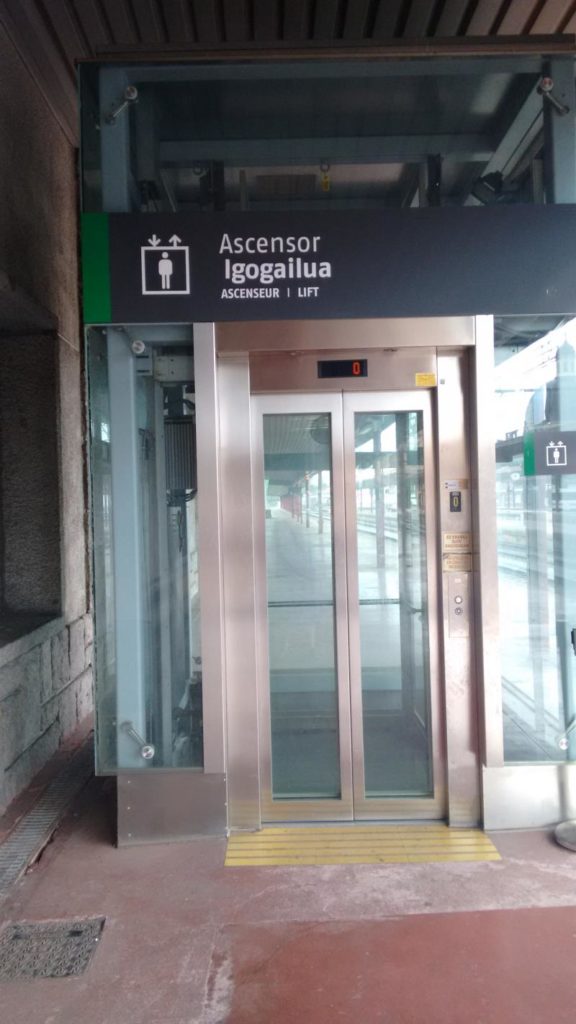 I inadvertently took a picture of my feet and that red pavement, which I trimmed to exclude my feet and put on my phone as wallpaper because it’s really pretty terracotta tiles. “Press [button with a bell on it] to call for help by telephone”, I suppose. “Telefono” is clear enough. This was in the hotel igogailua.

Basque from Hendaye. Incidentally pronounced as if it’s written ‘Hendaille”, not as I thought “Hendée”. It’s Hendaia in Basque. 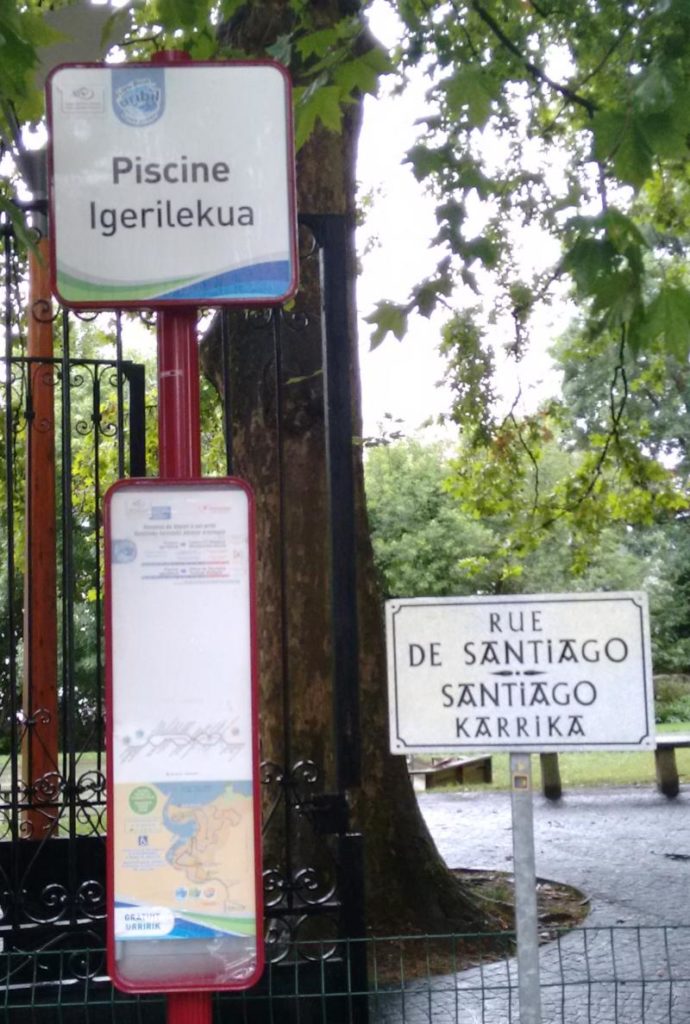 And the word for ‘swimming pool’ is amazing. 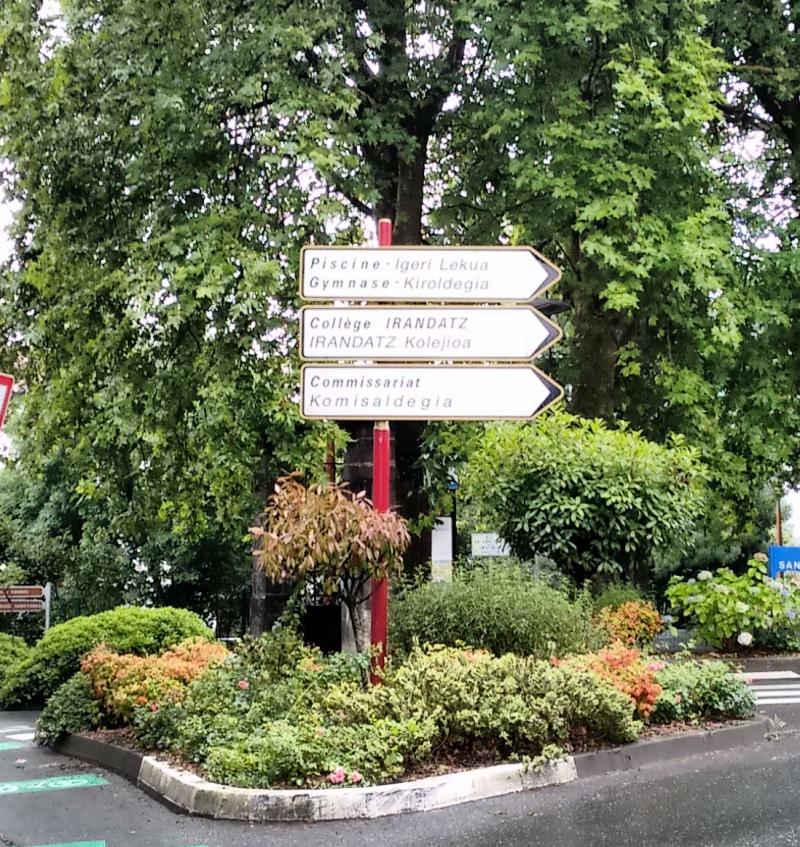 Another reference picture, to find this roundabout again so I could get back to the station. Here the sign apparently says “Swimming Pool” in two words.