Sunday morning, in church, during the Lord’s Prayer in various languages, a tiny story idea (an idea for a tiny story, not a tiny idea for a story, I get the latter all the time) fell into my head ready-made. At post-service coffee I told the plot to a couple of choirmates and they said “you’re beaming!”

When I got upstairs I mentioned it in public:

And David got inspired:

Helgaverse? I love Bosch, I have his catalogue raisonné on my shelf. Now I want to draw a Boschian vignette. 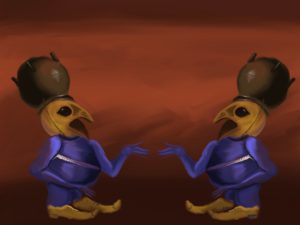 So I wrote it, and he drew it, and we coordinated, and here it is: Angels. Read it here without downloading, or get the epub or mobi here. (Spoiler: ten paternosters is about three minutes.)

It’s set in my alternate-history Germany, but the story is too short to show much of the setting. I think I should call the genre “fabulism” because witches are a normal part of the world, demons are in evidence, and prayer has immediate effect. (I thought “magical realism” at first but it’s not set in Latin America, nor am I Latin American, and I don’t want to be accused of cultural appropriation for a measly 461 words.)