Is it Christmas yet?

(both sites detect where you are by your IP address, and the first also guesses your language by that: I did a small double take when I asked a question in English that was answered in Dutch) 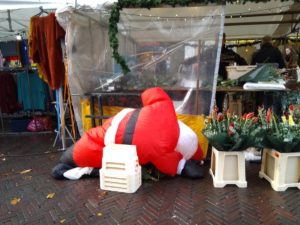 I wonder what he died of. Probably exposure.

I got so annoyed with people saying it was Christmas that I answered a tweet with “s/Christmas/Advent/ but yes” — I did want to say yes because it was an optimistic message I agreed with — promptly to be atheistsplained at with “ ‘Christmas’ for non-religious people is a season, not a day.” Yes, it so is a season. Only it’s a season that starts on December 25 and lasts until the Theophany on January 6, not a season that starts at some unspecified time in mid-autumn and ends the moment the calendar flips from December 26 to 27.

IT IS NOT CHRISTMAS YET. 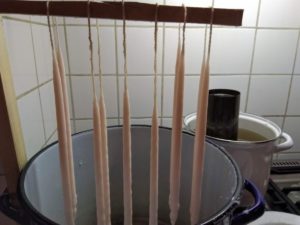 That said, it’s only one week now. We haven’t done any decorating yet but Spouse bought cards for people we really can’t skip, like ancient relatives who would otherwise be annoyed or even worried, and I’ve been making candles from the church’s 2018 Easter candle which I’ll hand out to whoever I see face-to-face, mostly people in church but also our neighbours and any offspring who happen to be around between now and the New Year. 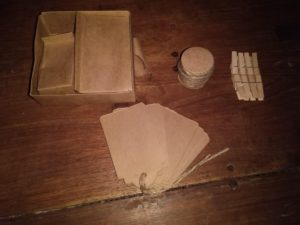 Incidentally, it’s as impossible this year as it was last year to buy a roll of simple red ribbon or really cute but non-tacky gift tags, so I got a box of mostly empty space, string, wooden pegs, and 14 plain but serviceable gift tags. I’ll probably need another box unless the shopping centre where I’m going today yields something more useful. (I’ll use the string to make bunches of three candles with a tag; I don’t know what the fillers of the box intended the pegs for but they’re of a particularly useless size, larger than the tiny ones in our Christmas-card-hanging-up kit.) [ETA: the pegs were admirably suited to fasten the Christmas-tree-stand cover and they’re in the decorations box for next year.]

Then there’s the Dickens Festival. I always think it’s the Sunday before Christmas but more often than not it’s the Sunday before that, possibly every time unless Christmas Day is on a Sunday. It becomes more scripted every year, and I thought it had had its time but it still seems to be unflaggingly popular. Some of the people it attracts are… well, when I went out late Sunday afternoon for some emergency shopping I first passed a couple of middle-aged women with Randstad accents who were fingering the leather goods outside the leatherworker’s shop and saying “passing off fake as real again, can’t do it for that price”. I know that anything in this shop or in front of it labelled “leather” is guaranteed to be real leather. It may not be good quality, and I don’t know if any of it fell off the back of a truck, but it’s definitely not imitation. I didn’t trust my voice enough to say something stinging; waspish remarks in a sore-throat voice are unlikely to sting enough.

In the supermarket a similar woman (only older and possibly richer) thought herself so important that she physically pushed me and someone else aside to get to the cash desk. If she’d said “sorry, I’m in a hurry, can I go first please?” I’d have said “yes, of course!” but now I could only roll my eyes at the checkout girl and my fellow pushee.

Some other Dickens-goers, including Germans, seemed to think all of the town, not only the festival, was a tourist attraction set up for their benefit and all the pesky locals did nothing but spoil the effect.

There were some good things too. A shepherd with two large grey donkeys and a small flock of diverse sheep, most of them with impressive horns (the sheep, not the donkeys). I patted one of the donkeys on the rump because that was the only part of it I could reach, but I don’t think it even noticed. End-of-shift Dickens “actors”: two teenage girls in beggar clothes, their faces smeared with dirt, eating fries from a plastic box; a gentleman, a lady and a very young gentleman of eight or so who loosened the more restrictive parts of their clothes as they walked away. 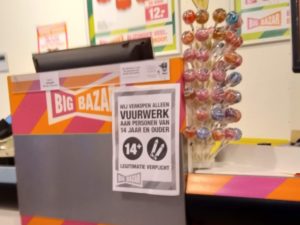 Yet another effort, on Monday, to buy ribbon didn’t give me any ribbon either, but a nice case of ambiguity. It’s just as easy to be ambiguous in Dutch with “only” as it is in English. “We only sell fireworks to people aged 14 and over.” I’m visibly over 14, and they sold me chocolate!