Semi-liveblogging: wrote as it happened and posted at the end.

I couldn’t go swimming because Spouse had a dentist appointment exactly at the time he’d otherwise open the door for Domestic Goddess who comes on Tuesdays. As I was staying home anyway I thought I’d better take care of the kulich: otherwise I’d have to do it on a day without a free evening. It turned out I made such an early start that it probably won’t run into the evening anyway, but better be safe than sorry. 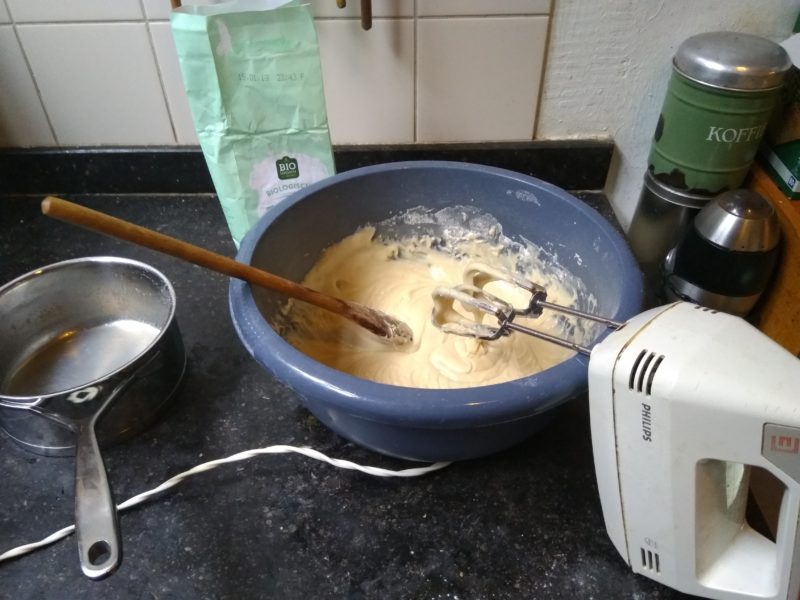 And so it begins

8:40 First stage of rising. I suddenly realise that I added all the sugar to the warm milk instead of only one tablespoonful of sugar. No wonder it looked so strange! I hope that didn’t kill the yeast or I’ll have to repeat the exercise tomorrow or Thursday after all. (No way I’m doing this in Holy Week; Irina’s Orthodox Bakery is reserved for prosphora then, and I’ve also got the pascha to make which must be done in Holy Week.)

9:00 Domestic Goddess arrives. We have coffee. I’m not in her way yet but know that I will be, later, so I make more effort than usual to clear away what I’m finished with and put the mixing bowl, beater and bag of flour on a tray so it can be moved out of the way in one go. 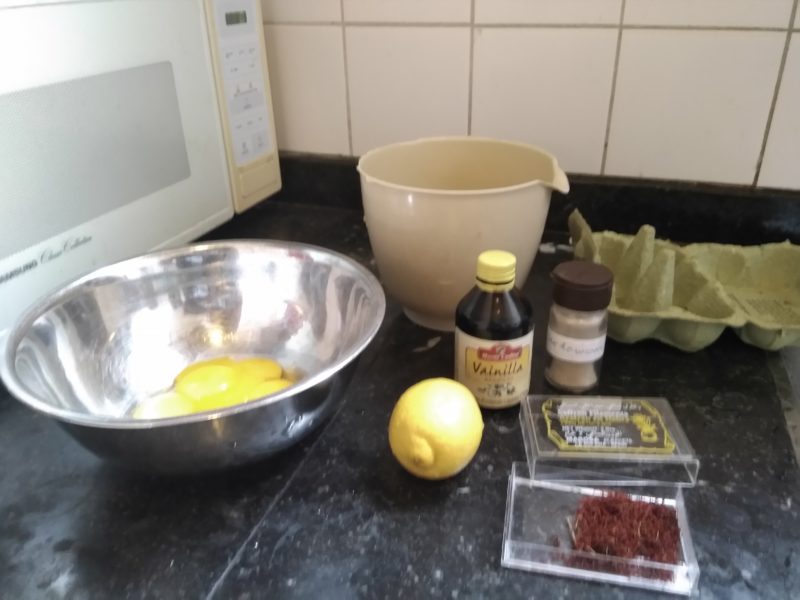 9:40 Separate eggs. Lemon zest, soaked saffron, cardamom and vanilla extract go into the yolks. This would be the proper time to add the rest of the sugar but it’s already in the proto-dough. 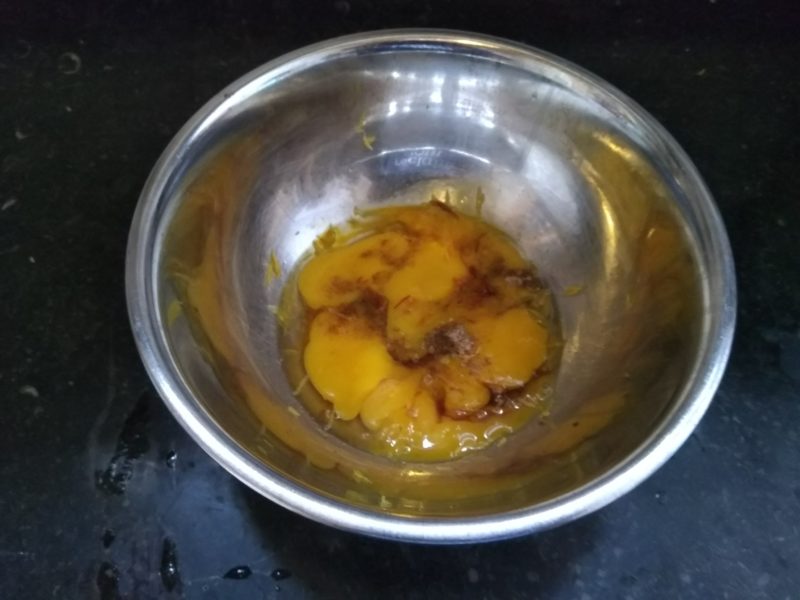 9:50 Spouse returns from dentist, little the worse for wear. 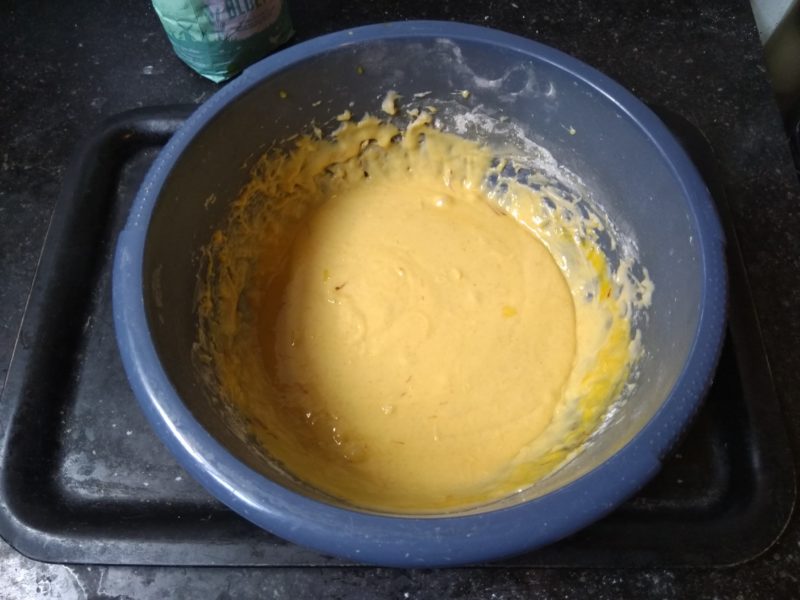 9:55 Mix yolks into the dough, beat whites, mix that into the dough. It does look bubbly, and that can’t be only from the egg whites, so I have hope. Cover the bowl and carry the tray to the dining table just in time for Domestic Goddess to come down and start on the kitchen. 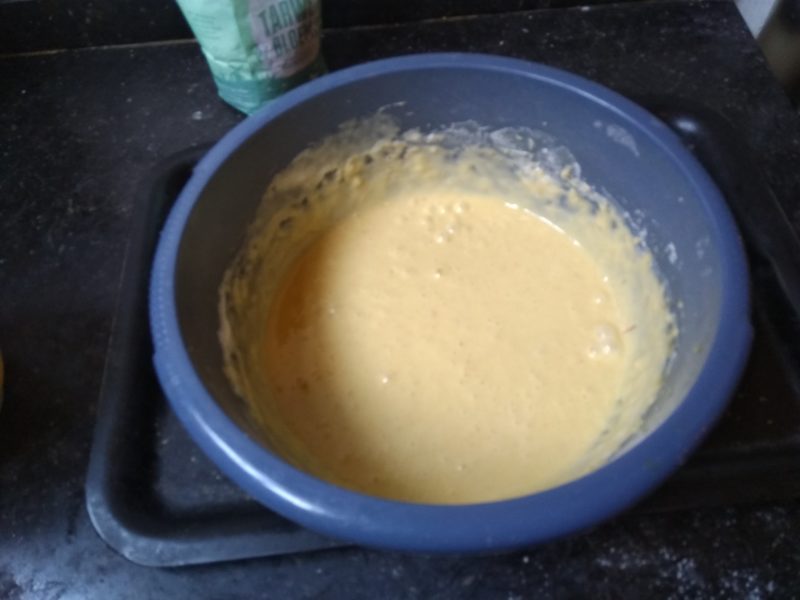 10:25 YES YES IT’S RISING. Not almost to the top of the bowl, though, like it did in some of the previous years. We’ll see. 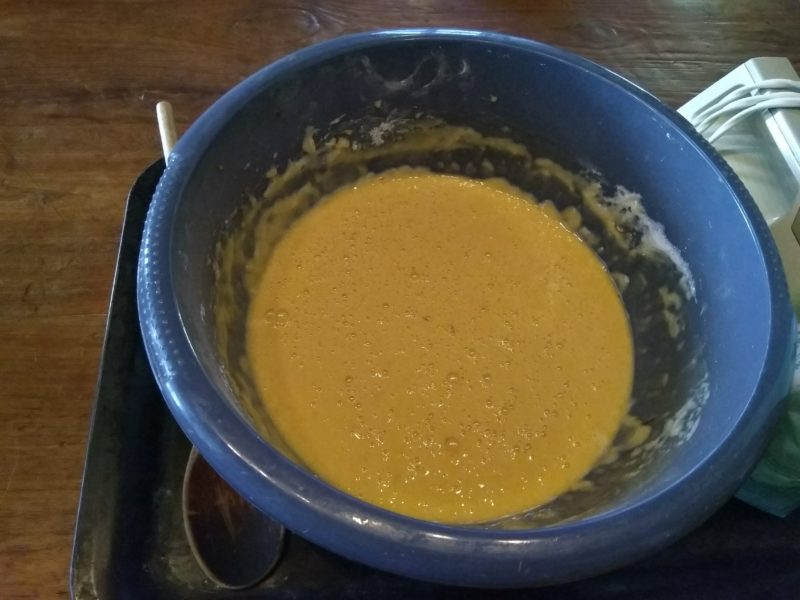 10.40 It’s rising properly. And of course it doesn’t strive for the top of the bowl because this is a single batch, not a double batch as I used to make when we had the house full of teenagers.

11.00 Attach kneading hooks to the beater before the dough gets too stiff to beat. Easy to remember because I’ve already put the beaters in the dishwasher. Melt butter, mix butter and the rest of the flour into the dough alternately, brown the last bit of butter before mixing it in. 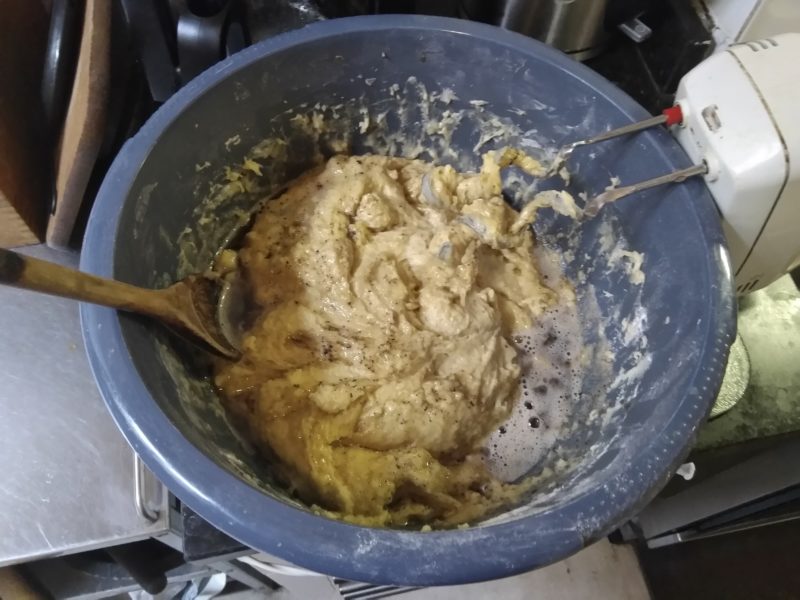 Do the last of the kneading by hand to feel if it’s right and to get the sticky bits of dough from the sides of the bowl. Now I wish I had one of those dough scrapers that Aliette raves about, but I make do with the little scraper I’ve got (which promptly detaches itself from its handle; it’s more than 40 years old so I’m not surprised, might get a better dough scraper next year). 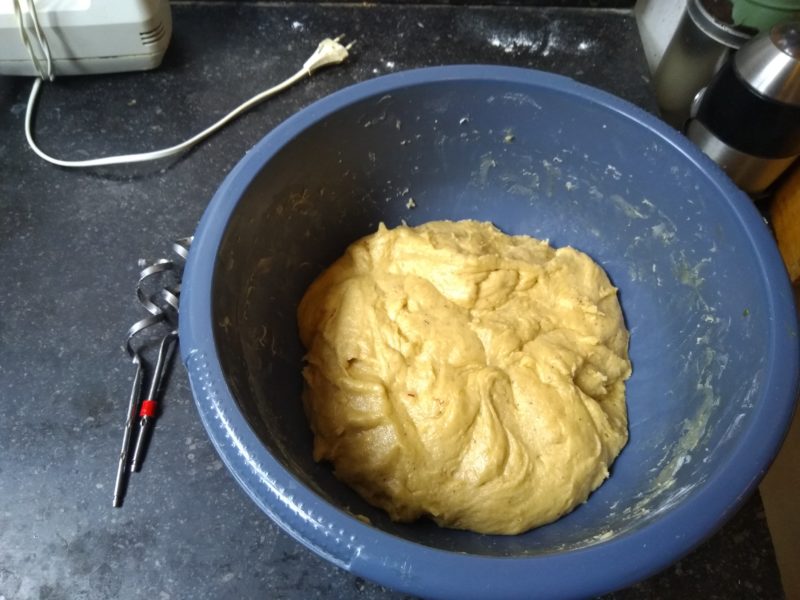 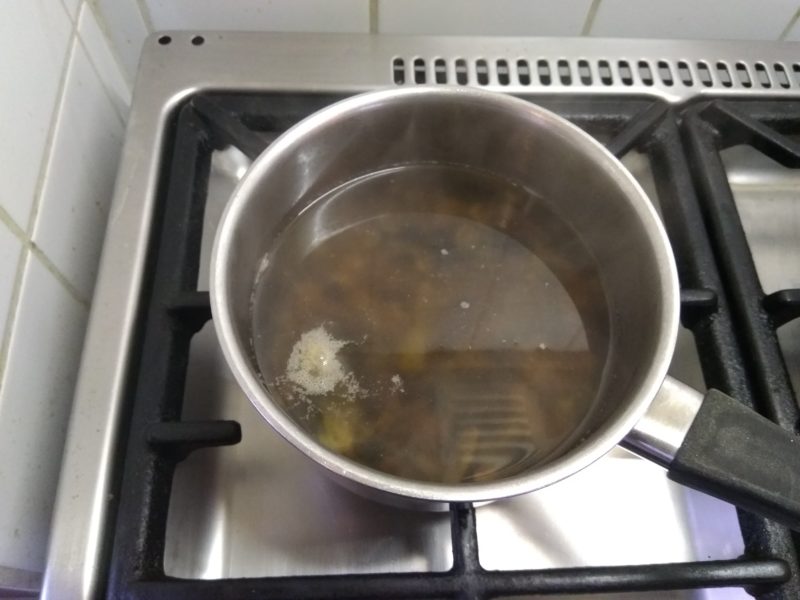 Blanched almonds, gave them a quick whirl in the mini-blender, threw in the tail-end of a box of almond slivers for good measure. Put fruit to soak. Spouse makes lunch from yesterday’s leftovers (rice and vegetables-with-tofu) and some mushrooms that need using up. 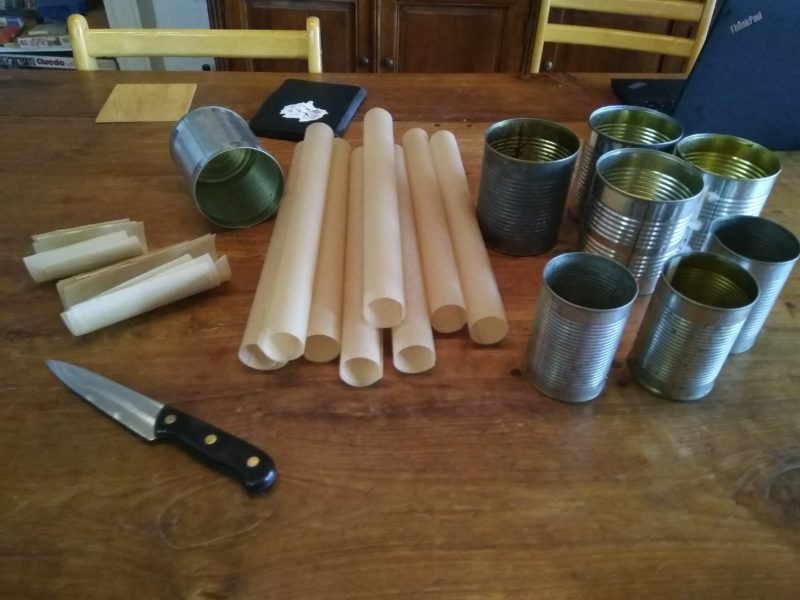 (That’s my ereader and new laptop in the background.)

12:50 Lunch eaten (it was yummy). Finished lining the tins. First time ever that I’ve actually done that before the dough is completely ready. 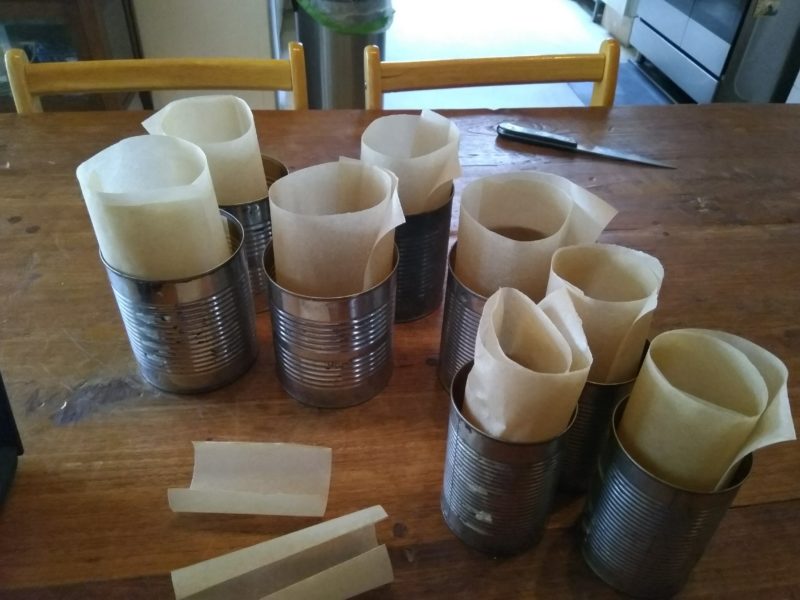 Mix all the fruit in, fill the tins. It always seems too little, but the recipe does say “no more than halfway” and I know from experience that the recipe is right about that. Too full, and the baked kulich ends up looking like a nuclear explosion. (Mushrooms are nice, but…) 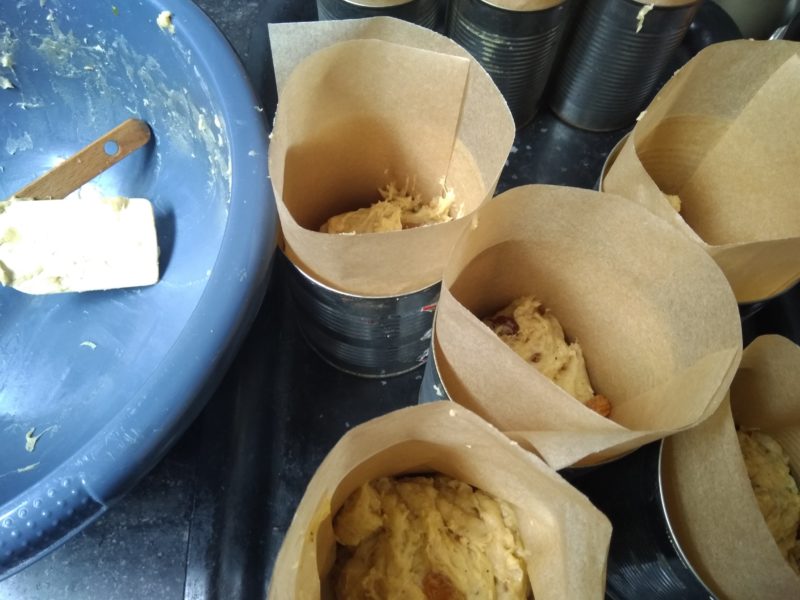 Filled (see the defunct scraper in the bowl)

After blithely putting the filled tins in the oven I went back to the recipe to see for how long, and saw that there was a half-hour prove outside the oven. (That’s how the later stages always seem to take longer than I expect.) 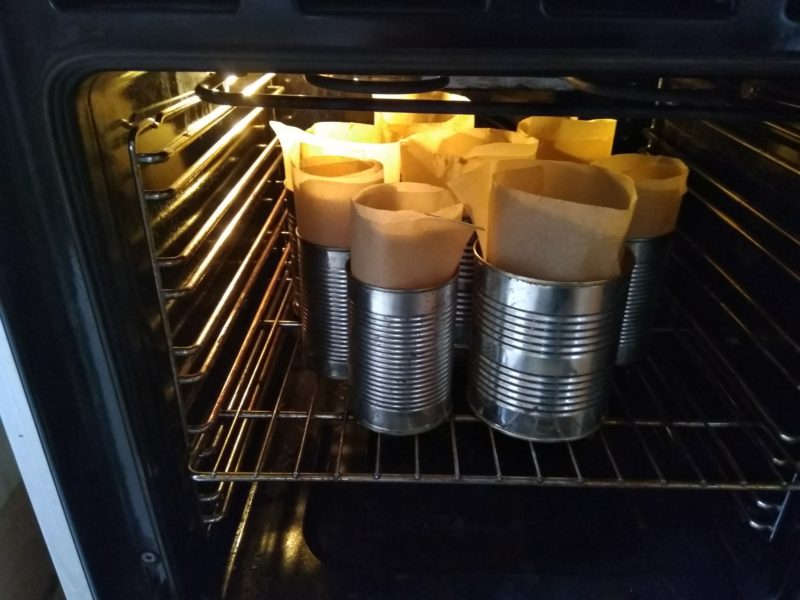 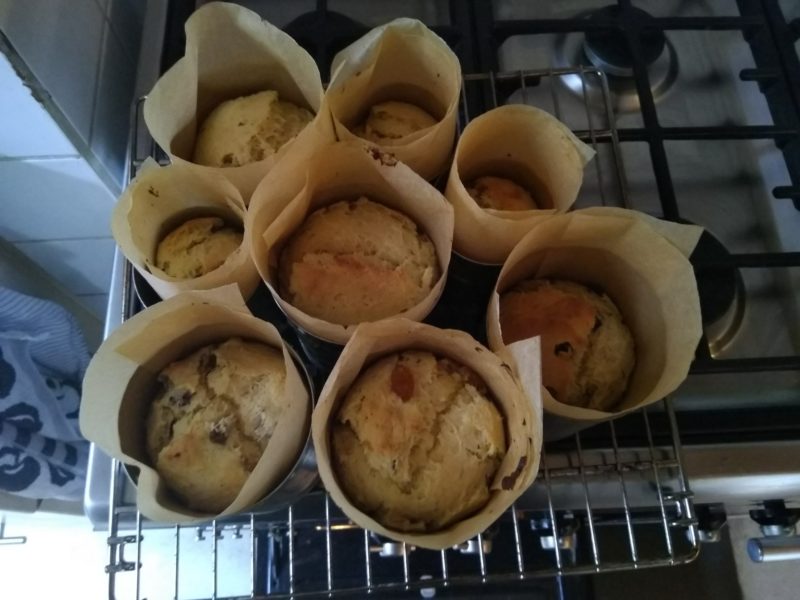 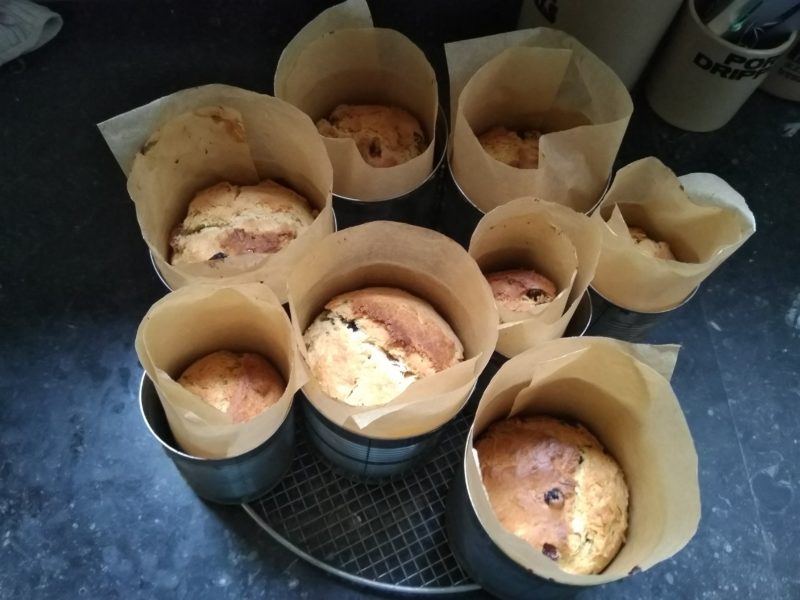 Six hours, not counting cooling and packing. It’s not as if it’s constant work, but it does take up most of my mental processing capacity. (I’ve been sorting files, wrangling the Krita mastodon account, things like that.) 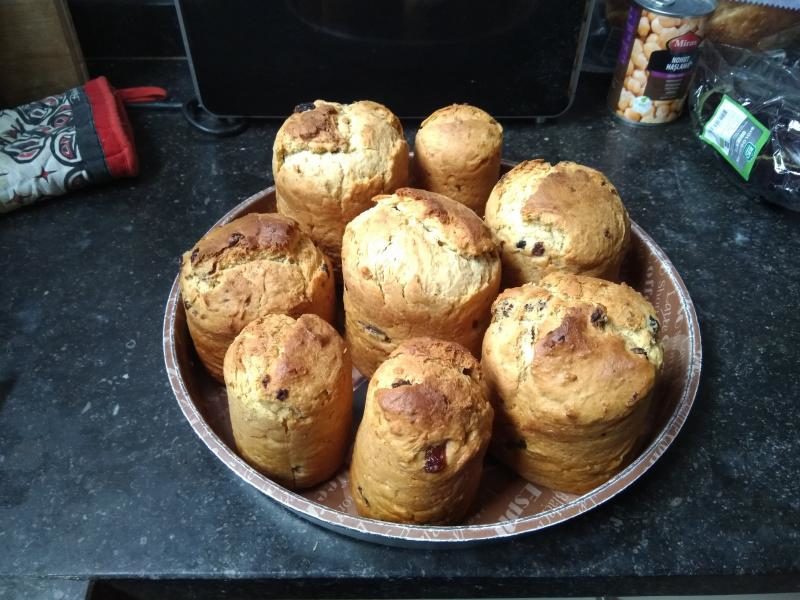 Three good enough to be procession candidates, but I’ll probably go with the lowest because that has a smaller chance of toppling over in the procession. Though the tallest is perhaps a bit prettier, and the one in the middle –also the middle of the tray– isn’t bad either. The one in front doesn’t have a perfectly straight bottom, because it’s HARD to get the bottom lining paper straight in the small tins if you don’t have tiny hands. Everybody whose tiny hands I could commandeer for that when I first started baking kulich has since moved out, and anyway their hands aren’t much tinier than mine now. 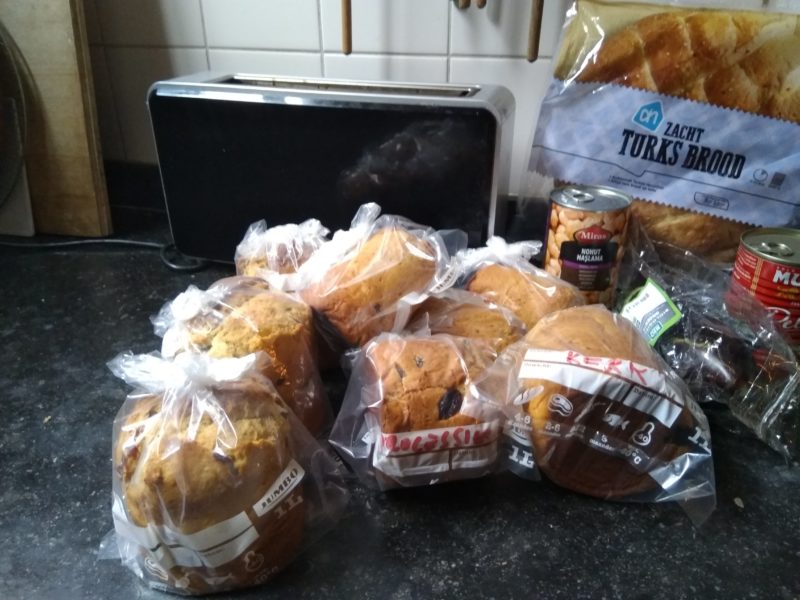 Ready to freeze (see the makings of our dinner, on the right)

16:30 Three are now in the church freezer: one for the procession, one for the midnight feast (the one in the procession doesn’t get eaten, but stays by the altar doors, and then someone may take it away in dried-out condition to feed to their animals), and a small one for Choirmistress. The other four just fit in the bottom drawer of our own freezer. One will probably be taken home by a daughter, but that’s not before Easter so it doesn’t help for the space.

I could have done it tomorrow (Liturgy of the Presanctified at six) or Thursday (choir practice at a quarter to eight) but I’d have felt I was in a hurry, even if I wasn’t, so I’m glad I did it today.