I’m recovering from a city trip to Berlin. It was totally worth it.

My other half had a conference from Thursday to Saturday, so he went on Wednesday evening, and I followed on Friday afternoon and arrived at 19:19– absolutely a time to be hungry so we ate at the Hauptbahnhof Hopfingerbräu restaurant. Recommended! Excellent German food and nice dark beer. I’ve heard the light beer is also nice but didn’t taste it. I had the Sülze, always a touchstone for German cooking. 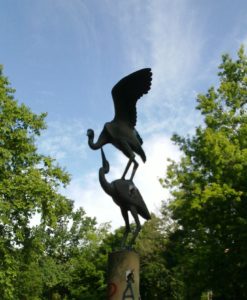 I had the Saturday to myself, started out early and got a public transport day ticket for Zones A and B, though I think I never left A as Berlin is big. I did some walking at first, found a little park (Berlin is full of little parks) with a very nice sculpture of birds in it, and something that looked like an Orthodox church from the side but turned out to be the Neue Synagoge, and then hopped on a tram that took me to the university and didn’t go any further so I walked through the university grounds and ended up at another little park, where I remembered I hadn’t done my exercises so I lay down on the grass and did them. (One of the nicest things about Berlin is that nobody seems to think it strange when a middle-aged woman lies on the grass in a park doing exercises.)

Then I stumbled on an exhibition of nineteenth-century classicistic sculpture. I thought I didn’t like the nineteenth century, or classicism, and that I didn’t care for sculpture much at all, but I fell in love with the princesses Luise and Friederike.

I think I was on about eight different trams and buses and passed the Alexanderplatz/Friedrichstrasse/Unter den Linden cluster of streets every single time. That’s how I knew, when I picked up my other half in the afternoon, where to take the 200 bus that passed our hotel– only there was something going on that kept all traffic including buses, though confusingly not tourist coaches, away from the stretch of street where we (and an Indian family who also had day-tickets but seemed to think that they were only valid on one bus line) were waiting for it. 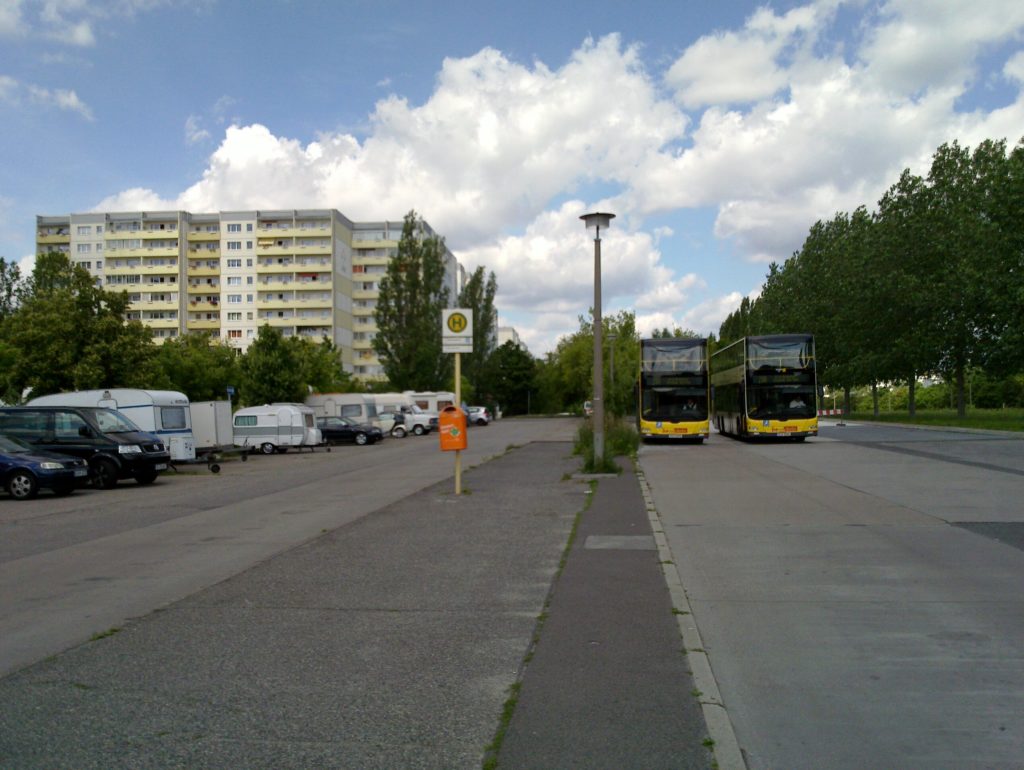 Who needs the Berlin City Tour for 10 or 15 euros when you can spend € 6,30 and sit on the top of a 200 (the only double-decker line), preferably in front, and get a nice cross-section of Berlin from Michelangelostrasse to Bahnhof Zoo. Someone thought of it in the 1990s too, and recommended it on a tourist site! I had the good fortune to have a pair of bright five-year-olds right next to me, who gave a running commentary on everything and asked their mothers when they didn’t know. (The university: “eine Schule für große Leute”, a school for grown-ups.) I almost went to the zoo when they did, but I didn’t see myself walking for three hours or so without stretches of bus and tram in between so I went back to the centre on a different bus and admired the various embassies. I don’t know if every embassy in Berlin has a distinctive specific-to-its-country style, but the ones I saw definitely had. India: red stone, somehow reminding me of elephants though there were none to be seen, and it wasn’t a shade of red that occurs anywhere around an elephant, just a strange association. Saudi Arabia: with an open-work shell around it that could signify prison, mosque, women’s palace, Thief of Baghdad. Every embassy had grandeur, security and national style in equal parts. The bus stop was called Nordische Botschaften, and apparently the Nordic embassies (Finland, Sweden, Denmark, Norway and Iceland) are world-famous but I don’t remember actually seeing those.

And I know I should have got off the bus when I saw the roadside fruit stall that wasn’t from a chain, because I was craving fruit all the time. (Also, sweet pastries, but didn’t get one until we were at the station waiting for the train home.)

Overstrained my feet and the rest of my recovering body in spite of spending half the time on buses. More than once I sang “Ich wünsch mir ‘ne kleine Haltestelle” when looking for bus stops, because Hathaway didn’t seem the right person to call on in Berlin.

When I picked up my other half he was as tired and hungry as I was so we had an early dinner at Augustiner am Gendarmenmarkt, another place for excellent German food, not cheap (though still only about half of what a comparable meal would cost in the Netherlands) but really really good. In my intermittent “drink beer with interesting names” campaign I had Edelstoff, which turned out to be golden-blonde and as bitter as Pilsner Urquell. Also, half a dozen tasty little sausages. And Fasskraut (after I’d asked “ist das auch Sauerkraut?” and yes, it was the same) stewed to great richness with cumin, and mashed potatoes. My other half tried to have Rotwurst, or failing that Blutwurst (black pudding), but the waitress seemed to think he was either stupid or didn’t know the German words and addressed him in English much worse than his German; eventually they worked out that it’s a seasonal product and he had goulash instead. Then we went to the hotel and crashed, sat in the bar for a while where wifi was free and my wireless network actually worked properly, which it refuses to do at home.

A swimming buddy recommended renting a bike, and indeed there was Fahrradverleih in every night shop and every other second-rate hotel for ten to fifteen euros, but I’m glad I took the bus instead, because the bus drivers knew where they were going and I wouldn’t have, I was afraid there’d be a deposit I couldn’t afford, and I don’t know the German traffic rules so I’d probably have screwed up majorly in my brain-melt state. Perhaps next time, when I’m in a condition to read a map. But on the other tentacle, I think I’d be less free with a bike than with a public transport ticket because I’d have to put it somewhere whenever I’d want to investigate something, and bring it back to where I got it.

Sunday was museum day: first I took my other half to the sculpture exhibition because he wanted to see it too, then we hit the Bode-Museum where I saw a lot more sculpture, though I’d said I’d had enough sculpture and wanted to look at paintings. In fact I did look at paintings, but the sculpture was great, though I got a bit silly thinking up stories behind every portrait bust and statuette. Not for the first time I realised that I like statues best when they’re painted. For instance this baroque archangel Michael, and the angel that any Valdyan would recognise immediately as Timoine: perfectly androgynous, exactly the right just-adolescent face and figure, and red hair. Or Saint Roche and his companion (that I can’t find a picture of) who look so shady that I imagine the artist saying “come and model for me and I’ll give you a silver piece each, and I won’t tell the guards that you’re here, and the whole town will revere you as saints forever after!”

Then my feet wouldn’t serve me any more, but we had five hours on a train in a comfortable first-class compartment. With bread and halfway-decent cheese (Germany isn’t a cheese country, a bit surprisingly because there are plenty of cows and sheep) and more Sülze and various drinks from the Edeka under the Friedrichstrasse station, and electricity so I could finish my roleplaying writeup. And today, I’m almost completely out of action, but I’d expected that.